YouTube user uyt384 does tests on old camera lenses, but not in the way you’d expect. Instead of testing the build or image quality, he uses a Geiger counter to see how much radiation is being emitted by each one.

In the video above, he tests a Pentax 50mm that’s very popular amongst film photographers:

This lens is the famous 50mm f/1.4 Super-Multicoated Takumar (S-M-C Takumar), well known for its radioactive thorium glass element near the rear of the lens. Some photographers claim this lens is one of the finest ever made, and use it as one of their favorites, despite the radioactivity.

In case you didn’t know, some camera manufactures from decades ago chose to use the radioactive elements lanthanum and thorium in their camera lenses (and sometimes viewfinders) in order to increase the glass’ index of refraction. 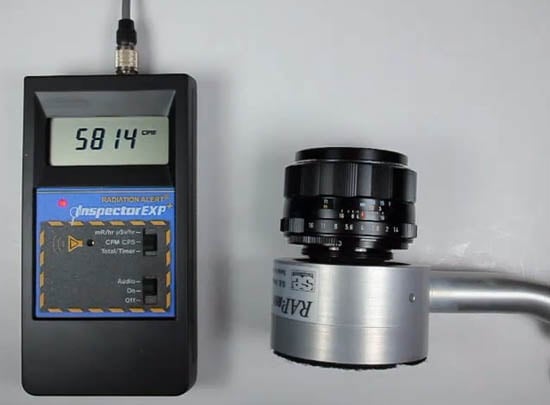 If you want to learn more about the health effects of this radiation, check out this article by the Health Physics Society. Based on that data, Matthew Miller writes,

This puts the “6hrs/day for a month” usage at about the same as getting a chest X-ray […] Or to put it another way, using the lens six hours a day for a year would be the same as taking three round-trip flights from one US coast to the other in that year. Not completely trivial, but not something people normally stress about. And that’d be really heavy usage.

The articles indicate that exposure to the eye might be a greater concern than overall dosage, particularly if you happen to have thorium in an eyepiece […] So you might decide to spend a little less time holding the camera right to your eye than you might otherwise.

Luckily, it’s pretty uncommon to have a viewfinder made with thorium. If you’d like to be sure that you’re not exposing your eyeball to unwanted radiation, try finding a Geiger counter to test your gear yourself.

Artist Finds and Develops Ancient Photo Paper, Some Older Than a Century