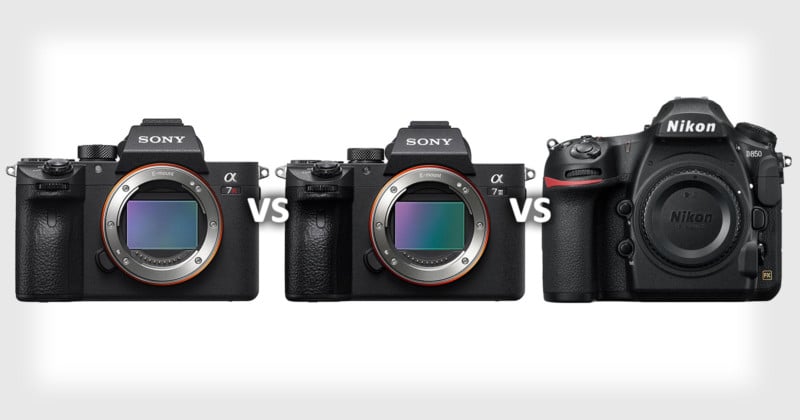 The Sony a7R III, Sony a7 III, and Nikon D850 have been making waves this year and are in the conversation for best camera you can buy right now.

Unfortunately, Canon didn’t show up to the party and hasn’t made a camera the competes as well as these three can. Sony has really stepped up their game this year and in the past few years, producing very well-equipped photography and video cameras.

Let’s see which one is going to win out!

In the full-frame DSLR crossover category, the $3,200 a7R III, $2,000 a7 III, and $3,300 D850 are the cameras that come up in that conversation. Our test today is going to determine which one is the clear winner and for what audience each camera is made for.

There are certain considerations you have to make, and the price-point of the a7 III might do it for most people. Is the extra resolution on the a7R III worth the extra money? That’s one big question. So is the dynamic range, ISO range, and image quality.

The Nikons are made very well and have stood the test of time. They are great little cameras that you can take anywhere and the DSLR form factor feels great in the hand. Sony is new to the game so we can’t say for sure how well these bodies will stand the test of time, but they do come full-packed with features, which is something a lot of cameras can say.

So, without further adieu, let’s get started!

For this test, we had our talent walk towards us and we shot a series of images to test if the camera could keep up with the changing distance of our subject. We shot at f/2.8 1/500 ISO 200.

It’s also good to note that it was an overcast day and Spike, our talent was walking from the shadows and into the light – a very difficult task for any camera to focus on. Nikon has face detection whereas the Sony has eye detection. So we were curious to see if that makes a difference. 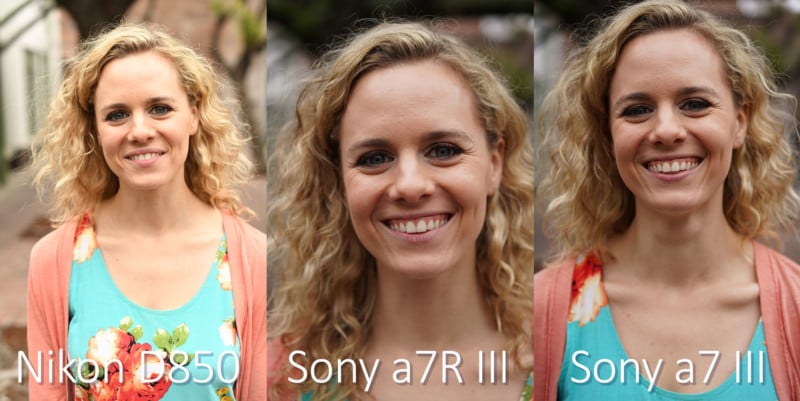 The Nikon kept up with the Sonys fairly well considering that it has face detection, which we thought would be different than Sony’s eye detection. The a7 III did the best in this test, which is surprising considering it’s the cheapest option.

Now we’re looking at image quality. The Nikon and Sony a7R III are pretty close in megapixels so they should be putting out the best images in this test. We’ll see how the a7 III can hold up with just half the megapixels. For people shooting fashion or landscape photography, the resolution will matter more and could be your deciding factor.

We are going to look at these images at 100% and 400% to really see which camera captures the most detail. 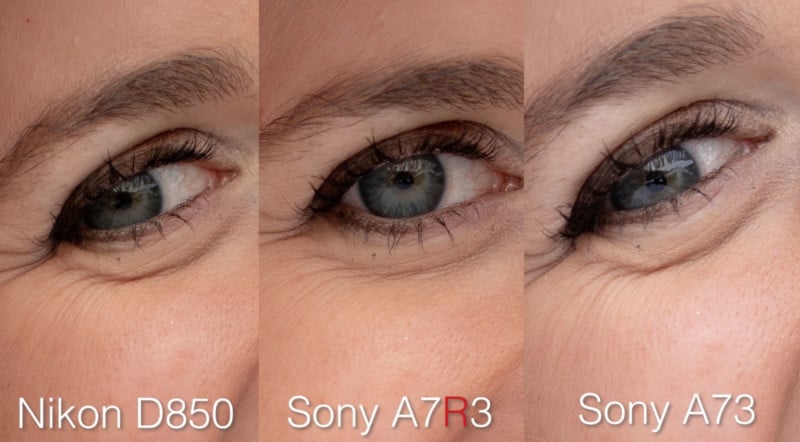 Looking at these images blown up at 200%, the Sony a7R III is the clear winner. But the a7 III isn’t too bad considering it has half the megapixels as the other two cameras.

We think generally the Sonys look so good because it doesn’t have a low-pass filter on the sensor that the Nikon has.

Now looking at them side-by-side, you have to wonder if the extra 20 megapixels is worth shelling out a thousand plus more dollars — because the difference to the eye is not that much. 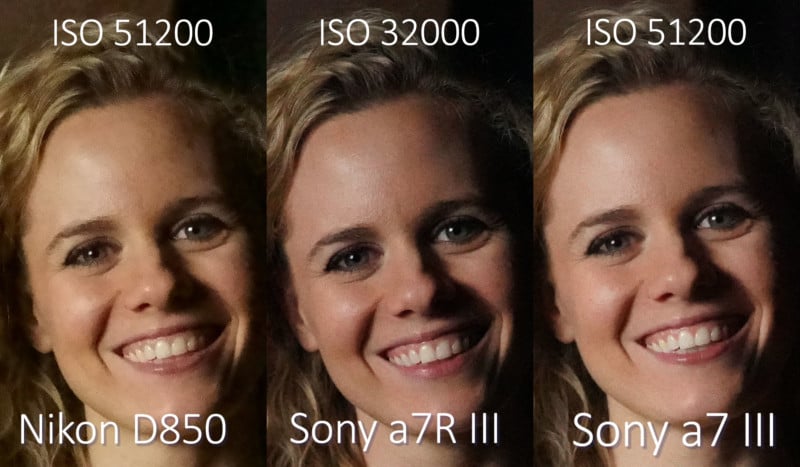 The Sony a7 III outperformed both the Nikon and the Sony a7R III in the low-light test. It is the definite winner when it comes to photographing in low-light. So if you need a camera that can do that, the a7 III the one for you.

In this test, we were looking at the noise level in each image as we stepped up. It seemed like the a7 had about a stop or so on the a7R III. The Nikon had the most noise out of all three, but the color and exposure were consistent throughout. Something we couldn’t say about the Sonys.

After 1600 ISO we saw exposure changes in the a7R III.

Generally, digital cameras do better when you underexpose them. These three were no different. In over exposed tests, the a7 III faired the best, but we started to see some shifts in color. Again, the Nikon performed well in terms of keeping each exposure consistent. 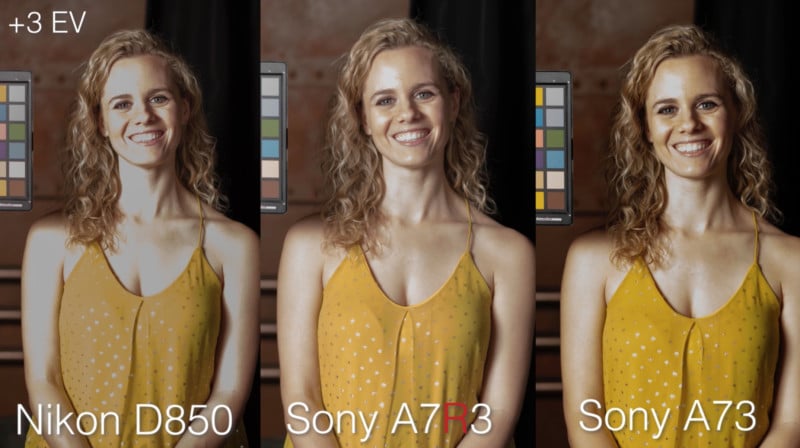 Picture profiles and the image that comes out of them is good to know if you’re shooting RAW or any type of video work. Sony has a great S-Log 3 profile which is pancake flat. Nikon just has a flat image profile, which you can tell – isn’t flat at all.

For video use, the Nikon is lacking in this category so keep that in mind if you want to use this camera as a video camera. 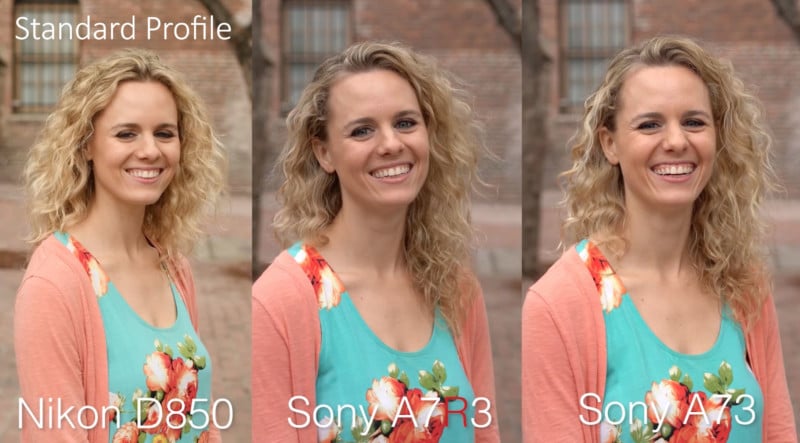 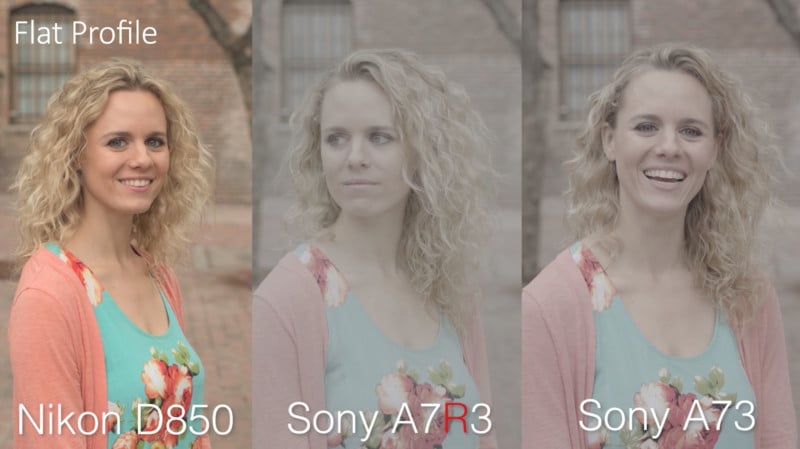 The Nikon kept pace with the Sonys for sure. It was struggling to keep up with the robust feature-set of the Sonys but excelled in being a consistent image.

The Sony a7 III is doing a phenomenal job considering it’s the cheapest option in this category. You would expect it to be getting blown out of the water, but in some cases like our low-light test, it was actually the best option.

For the price, there really is nothing out there competing with the a7 III. And you can spend that extra $2,000 on lenses!