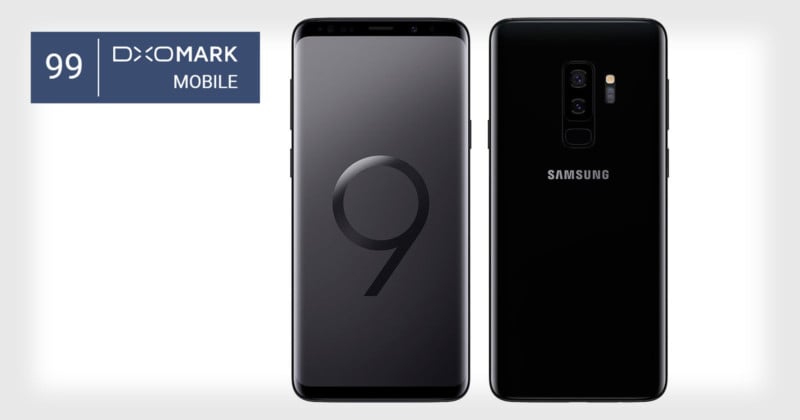 The new Samsung Galaxy S9+ officially packs the best smartphone camera ever tested by DxOMark. The camera equipment testing lab just published its review today, and the S9+ received a top score of 99, placing it above the Google Pixel (98) and iPhone X (97).

One of the main selling points of the S9+’s dual camera is the fact that the wide-angle camera features the first variable-aperture lens to appear in a smartphone. It uses a f/1.5 aperture in low light situations and switches to a f/2.4 aperture when there’s more light.

Features and specs of the S9+ camera include a 12MP main camera with a 1/2.55-inch sensor (the variable aperture camera); a 12MP secondary camera with a 2x telephoto lens, f/2.4 aperture, and a 1/3.6-inch sensor; optical image stabilization for both cameras; dual pixel phase detection autofocus on the main camera; an LED flash; 4K video recording at 60fps; and 720p video at 960fps.

Here’s the breakdown of how the S9+ performed in the major photo and video categories: “The Samsung Galaxy S9 Plus is a smartphone without any real weaknesses in the camera department,” DxOMark writes. “In both still and video modes, it performs well across the board, delivering consistently good photo and video image quality in all light and shooting situations, thus earning itself our highest DxOMark Mobile score to date.

“Add one of the best smartphone zooms and a capable bokeh simulation mode to the mix, and the Galaxy S9 Plus is difficult to ignore for any photo-minded smartphone user. With the Galaxy S9 Plus, Samsung is setting the pace for 2018. We’ll see if the competition can follow suit.”

The Sony a7 III Has Amazing Low-Light Performance