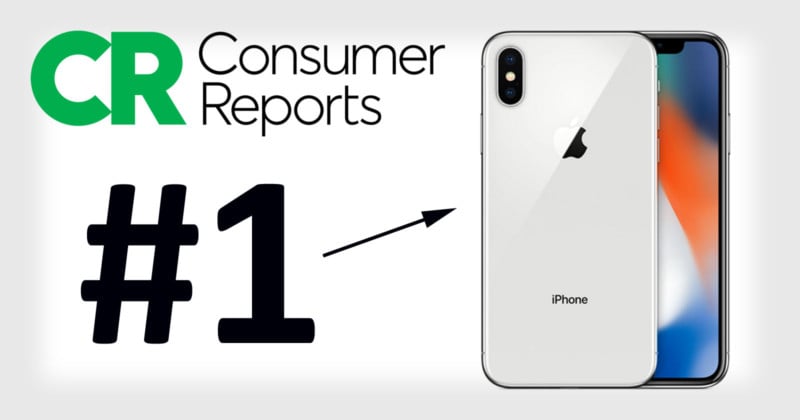 Consumer Reports has published its latest research regarding the best smartphone cameras on the market. The non-profit magazine concluded that the iPhone X is number 1 camera on the market today. The number 2 and 3 spots? They’re held by the iPhone 8 and iPhone 8 Plus, respectively.

Here are the 10 best smartphone cameras available, according to Consumer Reports:

As many reviewers are finding as of late, the quality difference between the cameras in flagship smartphones these days is shrinking almost to the point of being non-existent.

“[O]ur lead phone tester, Richard Fisco, notes that from a camera-quality standpoint, there’s very little variation among the top 10 smartphones,” Consumer Reports writes. “In fact, the differences among this group are so small that they could be chalked up to variations in our test samples, he says.

“All of the top 10 phones did very well in our tests of still-image quality, which evaluate resolution, dynamic range, color accuracy, and visual noise. The all-around top performers in that area were the iPhone X and 8 Plus, which just nudged past their iPhone 8 sibling.

“All of the listed cameras are great choices for still images.”

Just yesterday, we reported that DxOMark has ranked the new Samsung Galaxy S9+ #1 in its camera quality rankings, beating out the Google Pixel (now #2) and iPhone X (now #3).

Consumer Reports‘ latest report doesn’t include the S9 and S9+, as they have yet to be released. The magazine will be testing the S9 and S9+ in its labs in March when the phones officially launch, and it will be interesting to see if the iPhone X subsequently loses the top spot.

A Camera in One Hour: How CPS Saved the Day and My Photo Job