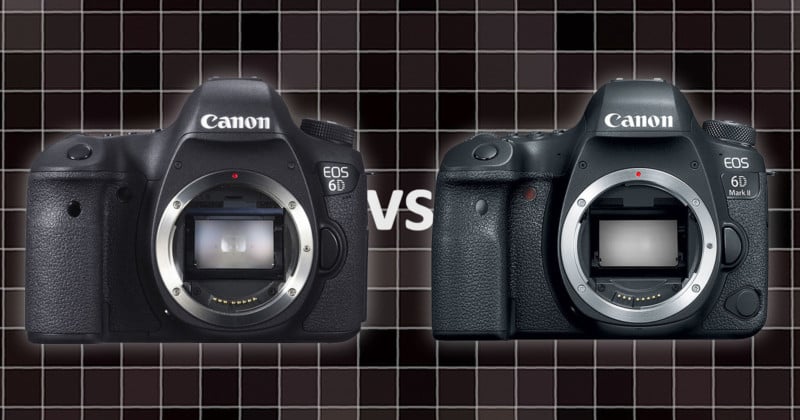 Canon released its 6D Mark II in 2017, and the Internet has been abuzz ever since then discussing its high ISO performance. There have been reports that the Mark II creates more noise at high ISOs than the original 6D.

But the thing about these comparisons is that number one, it’s hard to two compare cameras precisely. Also, while it probably is possible to craft a perfectly controlled, laboratory-quality comparison to measure noise, it wouldn’t reflect real-life shooting conditions.

My step-dad, Jimmy, recently purchased a Mark II. Since I have the original 6D, we were curious to see whether the rumors were true. We set up two separate experiments to test our cameras in various shooting situations. While our experiment wasn’t laboratory quality, we planned it carefully and the results are surprising. 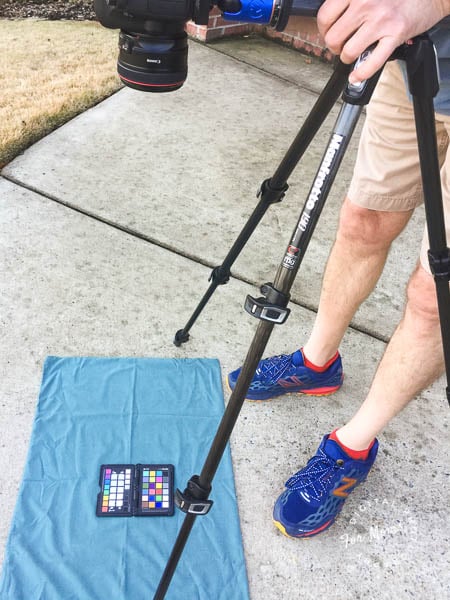 Background: What is Noise in Digital Photography?

My favorite definition of noise comes from Photography, by London, Stone, and Upton:

“Noise is the presence of pixels whose color and brightness is unrelated to the subject.” In other words, they are pixels that don’t belong in your shot – your camera’s sensor creates them, much like a weak signal creates static when you listen to the radio.

The photo above was taken at ISO 100. Because the pixels contain minimal data that is unrelated to the scene, you can see how each column on the histogram relates to a square on the color checker. The columns are narrow and distinct.

Look at the difference in the histogram of the same color checker taken with an ISO of 25,600. In this photo, the histogram doesn’t have separate columns. That means that the brightness and color values of each square in the photo contain a range of colors and brightness levels that overlap from one square to the next. The pixels that fill in the spaces between where the columns should be are noise. 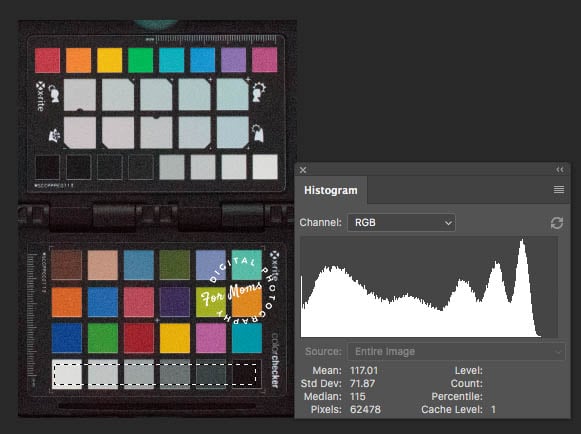 As if noise isn’t bad enough anyway, we actually have two types to keep track of: luminance and color noise.

Luminance noise is variation in the brightness of pixels that should have the same brightness. It looks like flecks of silver, gray, or white that shouldn’t appear in your photo. 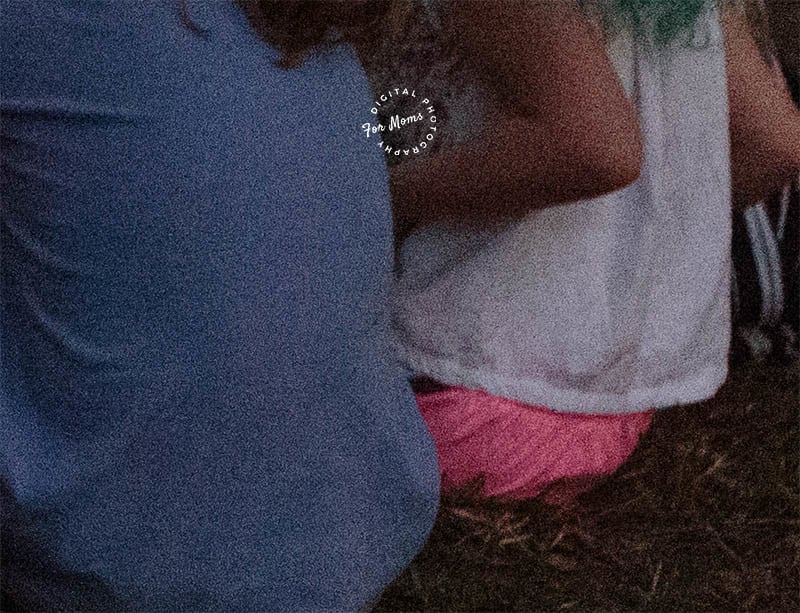 Color noise is flecks of green, magenta, or other colors. It looks like this: 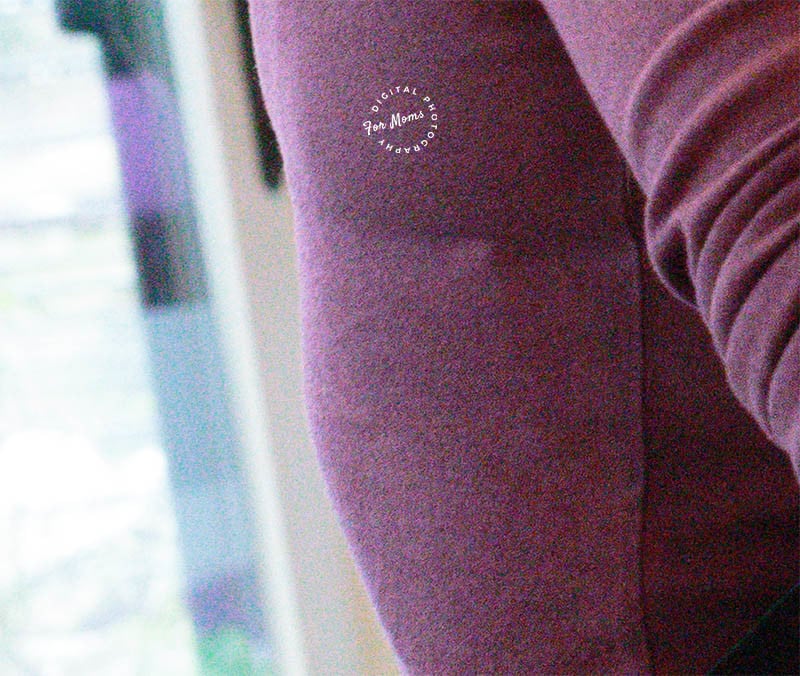 How to Measure Noise

Noise is hard to measure precisely in photos. For this experiment, I needed to measure luminance noise separately from color noise – since the Lab color space separates the brightness measurement from the color measurement, I used it to quantify the noise in our photos. Lab measurements consist of three values:

The a and b values of the Lab color space worked to measure the color noise. However, I didn’t expect the L values to be the same from camera to camera. Instead, to measure Luminance noise, I measured the width of the histogram for each color swatch, assuming that a more narrow histogram would have less noise.

The only variable was the camera. Our controls were:

We followed this process to compare the Canon 6D to the 6D II:

I used the luminance histogram and color selector tools to measure the pixels in our photos.

The photos were noticeably different from camera to camera. Each camera produced noisy shots at high ISO. While the appearance of the noise differed between the two cameras, neither of us could say that noise was better or worse from a cursory inspection of the photos. Because there was a difference, I wanted to quantify it to examine what caused it. This led me to inspect the measurements in Photoshop and revealed interesting trends.

Because each photo was exposed slightly differently, I wasn’t able to measure the brightness numbers directly. Instead, I created a luminance histogram for the same part of each square on each photo and I measured the width of those histograms. Remember from my photo up above how photos with low noise have more narrow columns on the histogram? I used the luminance histogram to tell me how wide the range of darks and brights was for each square. The photos with the widest histograms have the most luminance noise. My histogram measurement process looked like this: 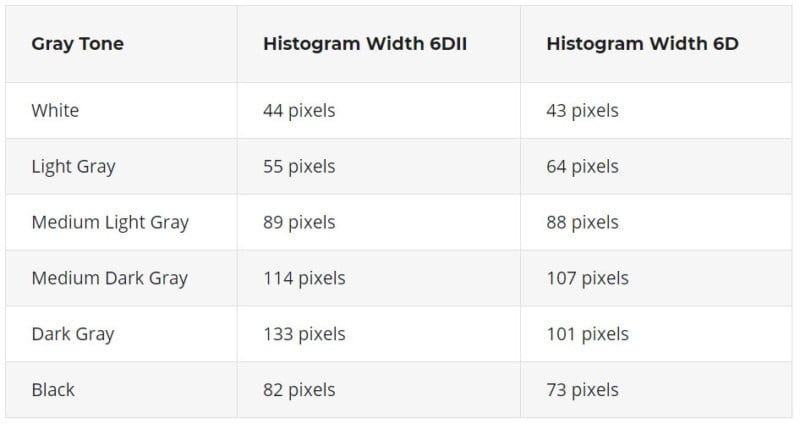 The 6D II had wider histograms, and more luminance noise, on 5 out of the 6 color swatches. 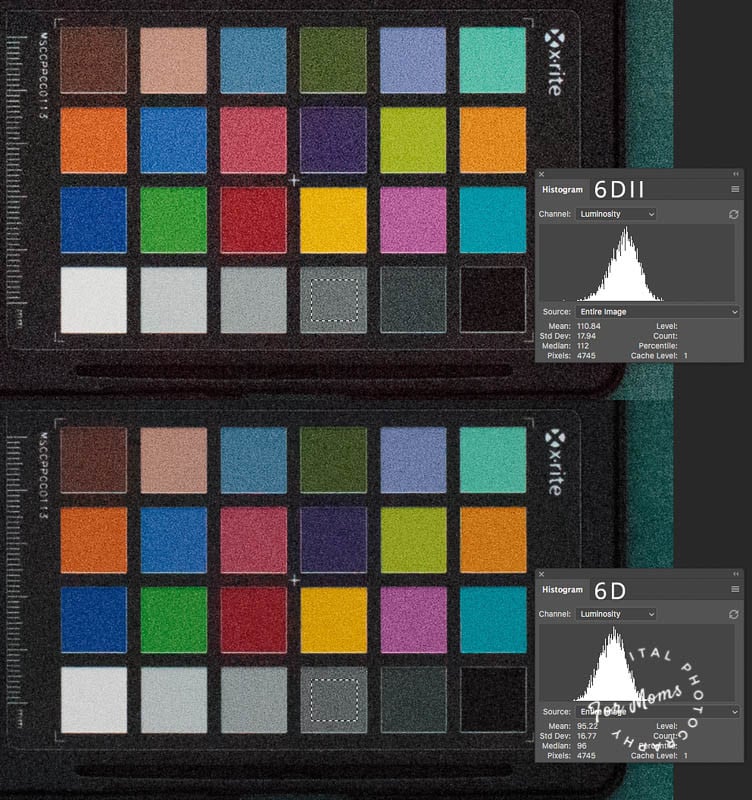 To test the color noise, I used the Average Filter in Photoshop to get an average reading for the same pixels in each photo. These pixels should be neutral gray, meaning that both the a and b values of their Lab measurements should be 0. 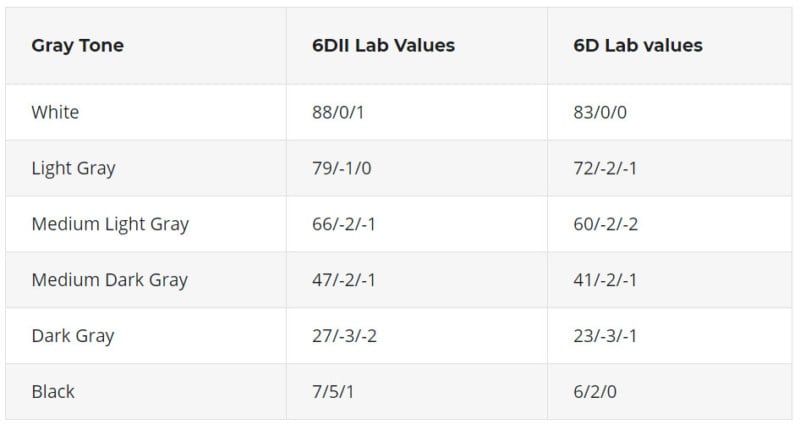 Let’s talk about what those numbers mean. The L value (the first number in any series of three) is higher in the photos from the 6D Mark II because those photos simply came out brighter. I’m not sure why this happened. It’s possible that the 6D Mark II renders photos more brightly or because of variations in our lenses – we each used our own 50mm f/1.2 for this part of the experiment.

Both cameras skew towards green except in the very darkest parts of the photo, as indicated by the negative a values. Both cameras skewed towards red on the black color swatch. The 6D Mark II has a significant swing in the a value between dark gray (-3) and black (5). This is the same resulted documented by Alan Dyer at The Amazing Sky. The following screenshot shows a zoom into the pixel level of the black swatches on both cameras. The red tones are visible on the histogram and to the eye: 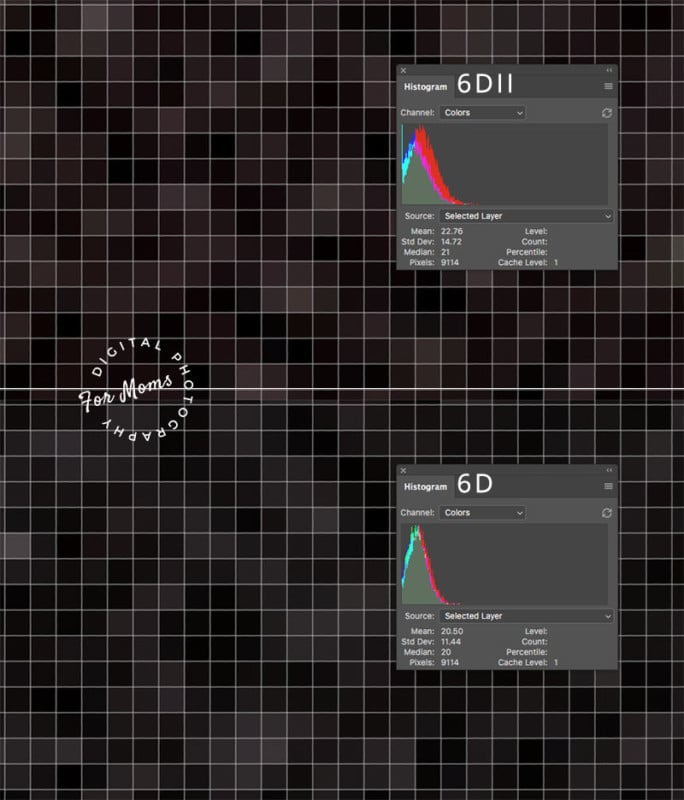 Both cameras skewed toward blue in the b values, except for the black square. The 6D Mark II skewed to yellow on Black, and the 6D was neutral.

While color checkers are great for detailed comparisons, they aren’t the most common subject for our photos. Jimmy and I both took the following (admittedly uninspiring) shots of a woodsy area.

I aligned the photos and displayed half of each next to each other: 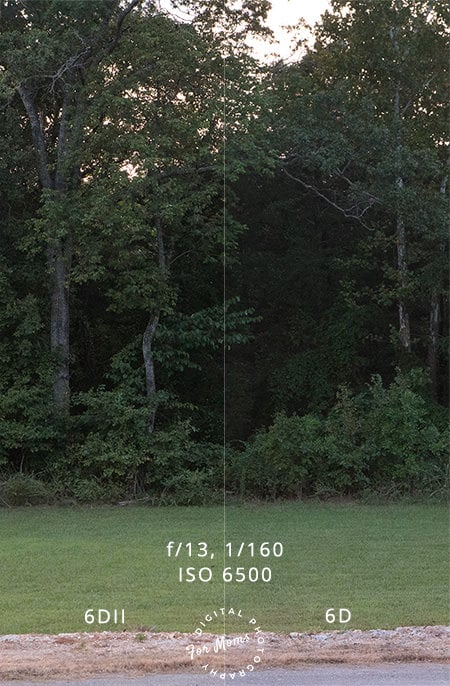 When taking these photos, we used the same lens, moving it from one camera to the other between shots. The 6D Mark II photo was brighter here also, which suggests that either the camera records the scene more brightly or that the Raw data produces a different result in Lightroom. Here is a zoom in.

Given the differences in exposure and contrast, it’s hard tosay that one is better than the other in this zoom in. 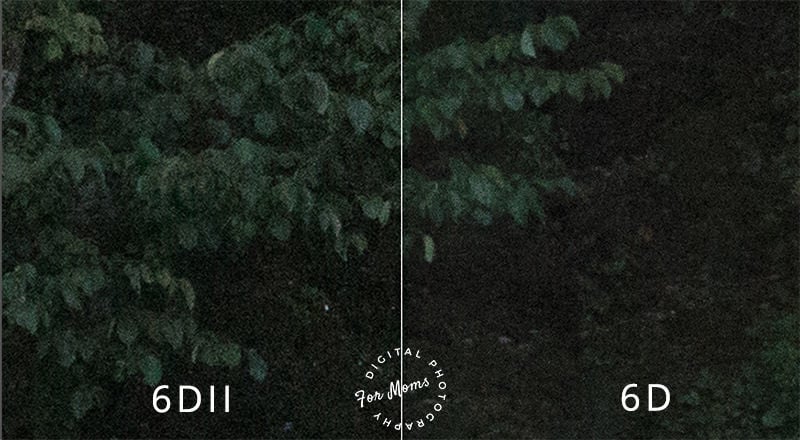 What This Means for Your Photos

Should You Choose the 6D or the 6D Mark II?

If you take low light photos often, especially of dark subjects (like the night sky), it appears that the 6D will perform better in terms of noise. However, the 6D Mark II has many benefits over the 6D, some of which might be more important to your shooting needs. To name a few:

So, choosing the 6D Mark II over the 6D depends on your unique shooting situation.

About the author: Erin Peloquin is a photographer, educator, entrepreneur, and quite possibly the world’s only professional photographer who has also been a certified public accountant and taught Ancient Greek to middle-schoolers. She’s the founder of Digital Photography for Moms, an educational resource for photographers. You can also follow her on Facebook. This article was also published here.