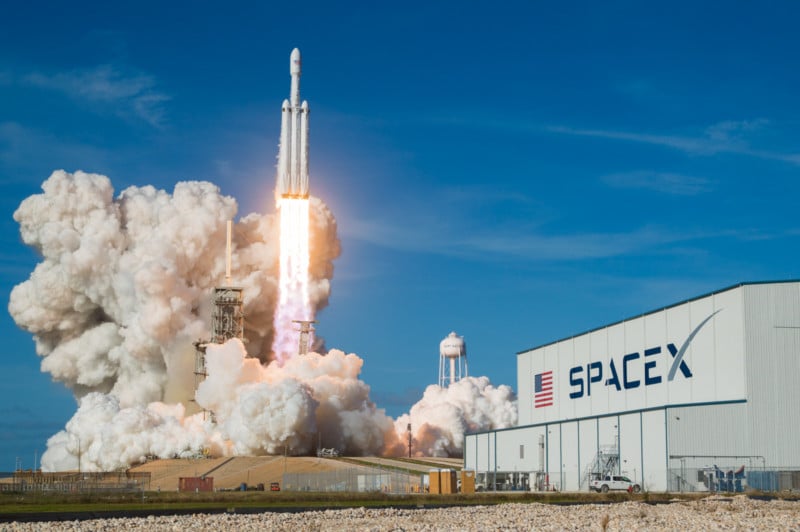 My name is Brady Kenniston, and I’m a portrait and wedding photographer from a small town in Michigan, nowhere near the rocket haven that is Kennedy Space Center. Occasionally I shoot high school sports and cover events for our small town, but it’s hard to prepare yourself and equipment to capture 5 million pounds of thrust coming from the 27 engines attached to a 230-foot tall rocket with a Red Tesla Roadster in the payload fairing.

For the week leading up to launch, I was constantly pacing around my house going over every single detail with a fine-toothed comb making sure I wasn’t forgetting anything for the 1,000-mile journey to Cape Canaveral.

On February 6th, SpaceX launched their first Falcon Heavy rocket. With three normal Falcon 9 rockets strapped together as one, success or failure didn’t matter… this launch was sure to be spectacular. SpaceX’s CEO Elon Musk wasn’t confident in a positive outcome, giving it a 50/50 chance of just getting off the launch pad. Luckily though, almost every part of the mission was executed as planned. 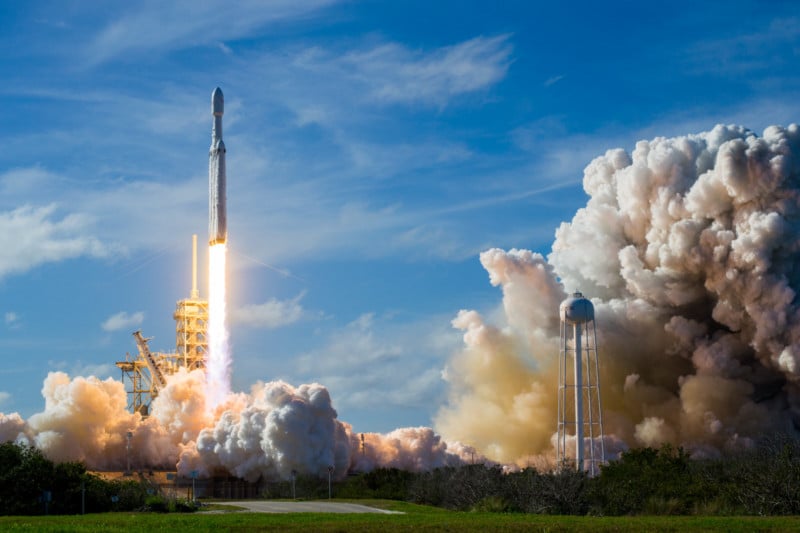 Having been rumored and reported for over 5 years, this launch was a media circus. Nearly 400 media members were approved and accredited to cover this launch, which is a huge increase from the 30 to 40 that make it into SpaceX’s normal Falcon 9 missions. The jump in media attendance, both from reporters and photographers, made it increasingly difficult to not only get a good shot but a unique shot as well.

In December 2017, I managed to capture a shot nearly no one had seen before: the plume of fire coming out of the Falcon 9’s engines as it pushed a capsule to the International Space Station graced my lens. The learning curve and success of this image gave me confidence leading up to the Falcon Heavy launch.

After arriving at the Cape, all launch photographers were to meet beside NASA’s Vehicle Assembly Building to be transported to launch pad LC-39a. This is the same pad that took Americans to the moon and launched a huge amount of Space Shuttle missions.

Setting up remote-activated cameras is a nerve-wracking event. Leaving 4 cameras and lenses outside in Florida’s drastic temperature and humidity changes, hoping the cameras and sound triggers have enough battery to be woken up by the monster the next day is not comforting, to say the least.

Coming up on the T-10 second countdown is an adrenaline rush. All of my preparations come down to this moment. Watching the world’s most powerful rocket liftoff is a complete sensory overload. From 6 miles away, I watched a water vapor cloud shoot out from beneath the rocket as it lifted off the ground. It is as bright as the sun; the ground is shaking, and the sound of 27 rocket engines absolutely blocks out any other sounds for nearly a minute. It is breathtaking. 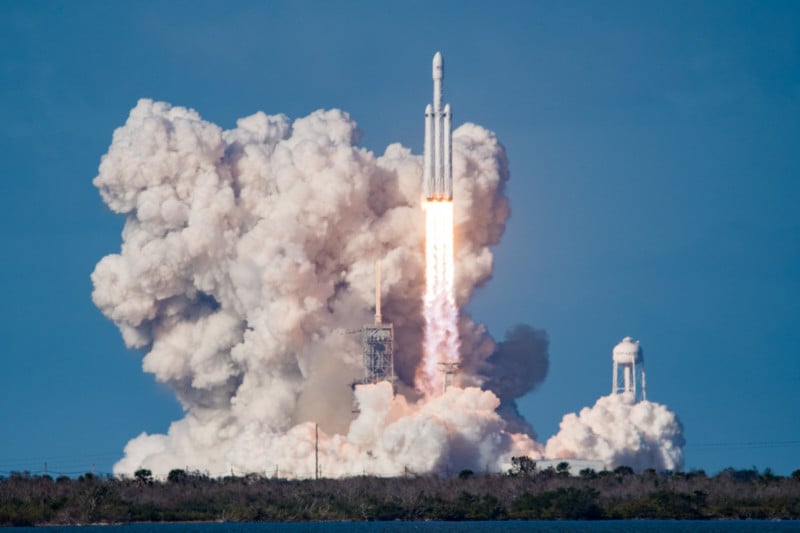 However, the coolest moment of this particular launch was seeing both side boosters (both the size of the Statue of Liberty) land nearly in sync with each other. I was standing 3 miles away from both boosters as they made their final landing burns and gracefully touch down within seconds of one another. Three engines lit up as each booster reentered Earth’s atmosphere. Equipped with a 150-600mm lens, I could track the boosters through the clouds as they barreled toward the ground faster than the speed of sound. Ending with 3 sonic booms each blasting through the calm Florida air, it was a sight to see. 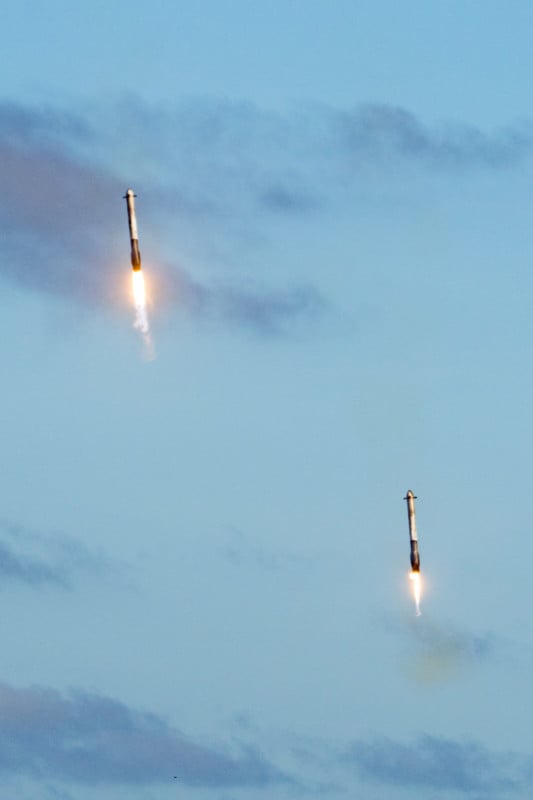 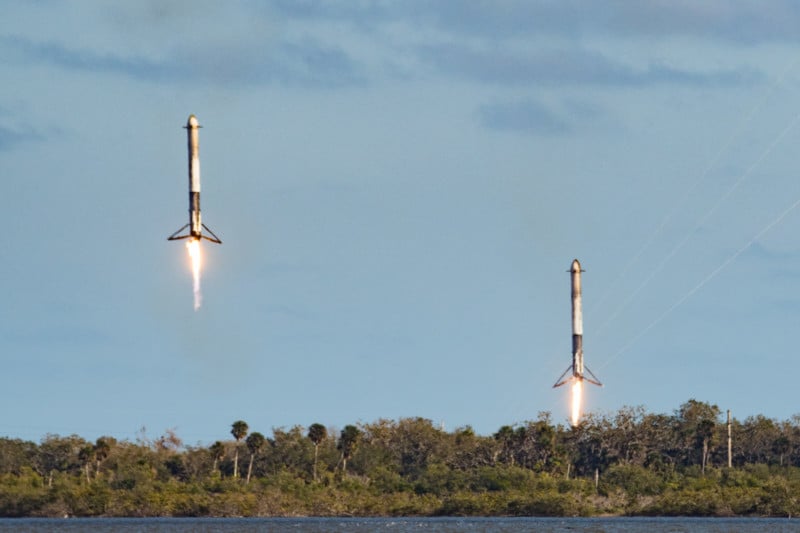 After the entire mission was complete, I retrieved my four remote cameras from the launch pad. Upon review, I knew I had captured the shot of a lifetime. The photograph featured all 3 boosters in action mere seconds after leaving the launch pad. Flames from 27 engines wicking down as the sound suppression water vaporized into a cloud thus invoking a sense of power I never imagined I would capture. 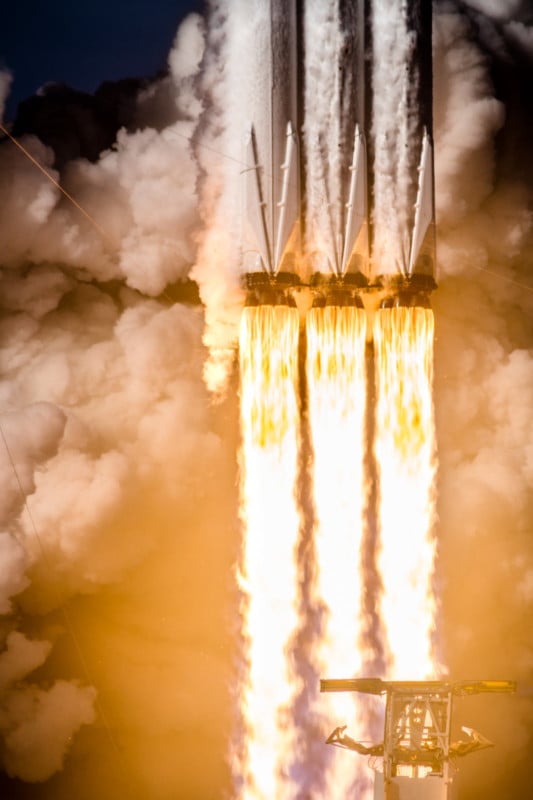 I frantically tweeted the photo out to my editor. The image gained nearly 100 retweets in a minute, a feat I certainly wasn’t prepared for. I usually play to an audience of 500 followers, so 100 retweets is a GREAT day for me.

As I look down at my phone, I am notified that Elon Musk not only saw my once in a lifetime shot but also retweeted it to his 19 million followers. At this point, I was shaking and could barely speak. I ran up to a friend of mine, John, and manage to stutter out what just happened. My phone felt like it was about to go up in smoke from all the notifications. 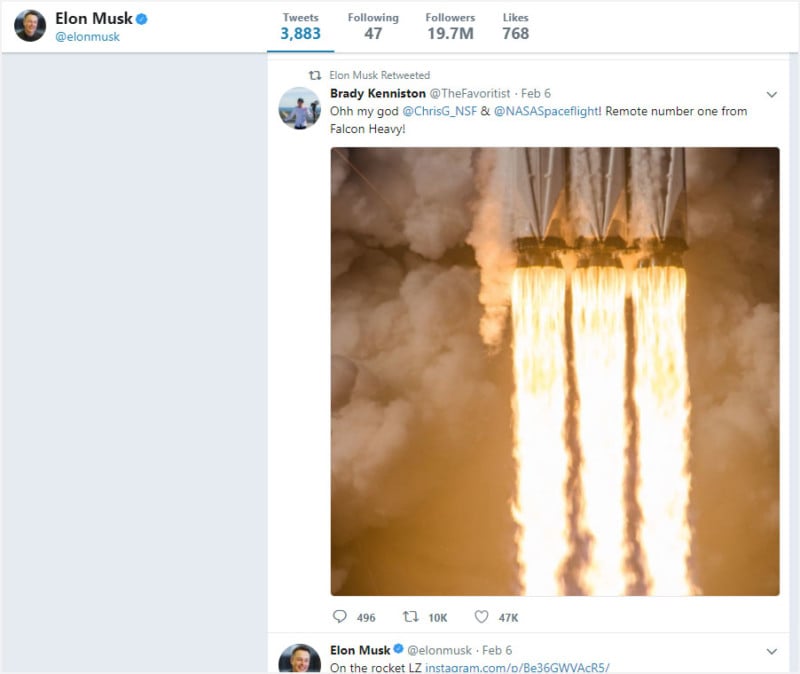 For a few days, I could barely use my Twitter app… Even with notifications turned off. Every time I tried to respond to someone, 20 more replies would come in. It was overwhelming madness.

My image ended up with over 45,000 favorites and nearly 10,000 retweets. As mentioned previously, I’m a small-town, 22-year-old photographer. Having that absurd amount of social media exposure was unlike anything I’ve ever experienced before.

For now, I’m back in my hometown. With the success of my photograph, I now have the opportunity to fly down significantly more often than I was able to before. Rocket launch photography started out as a passion project and thanks to the wonderful people at NASAspaceflight.com, the outlet I shoot for, I’ve finally started to nestle it into my career. 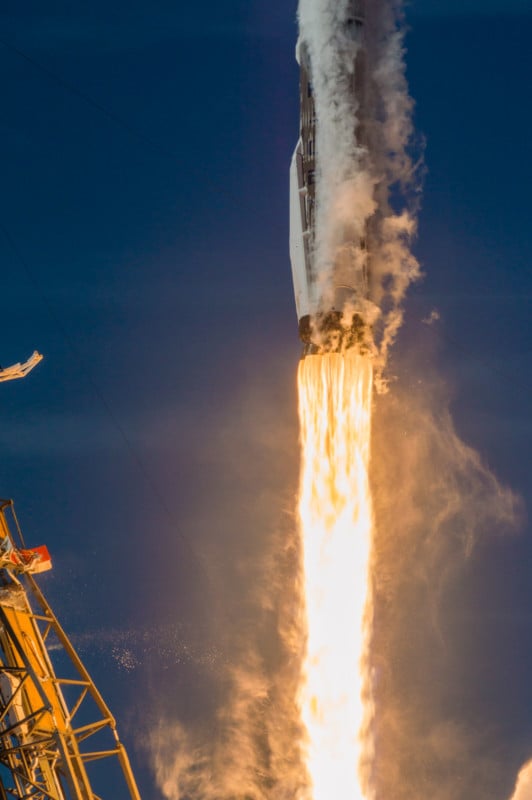 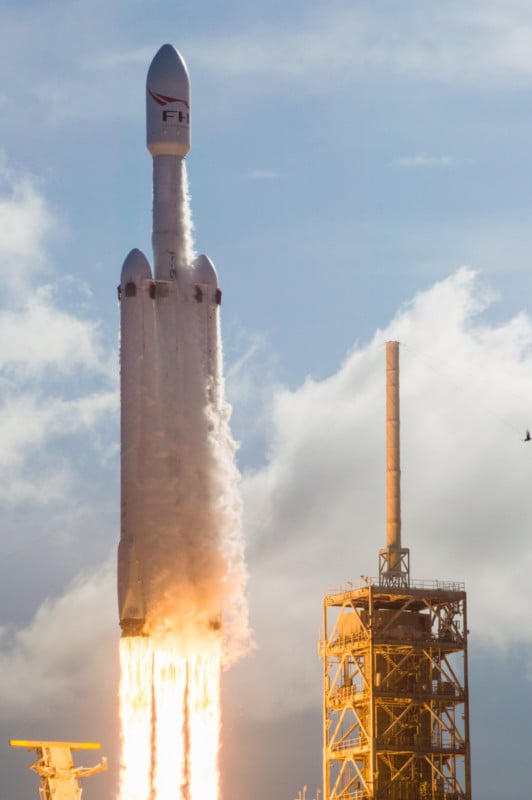 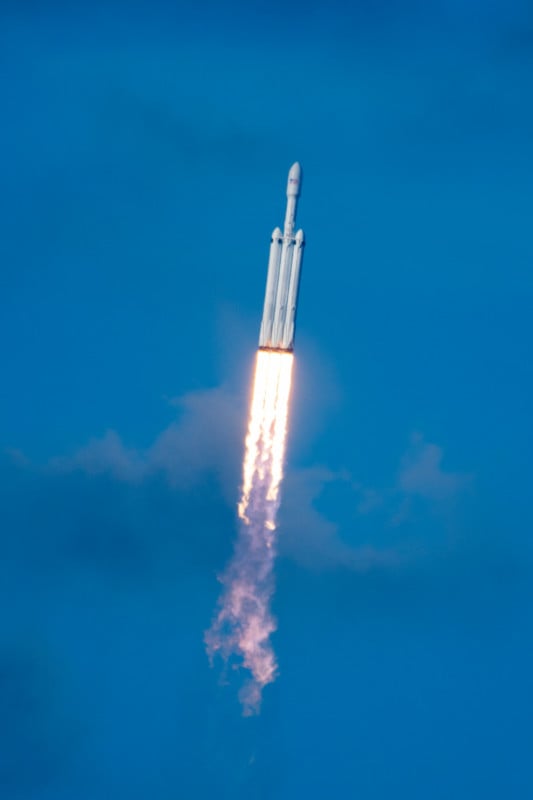 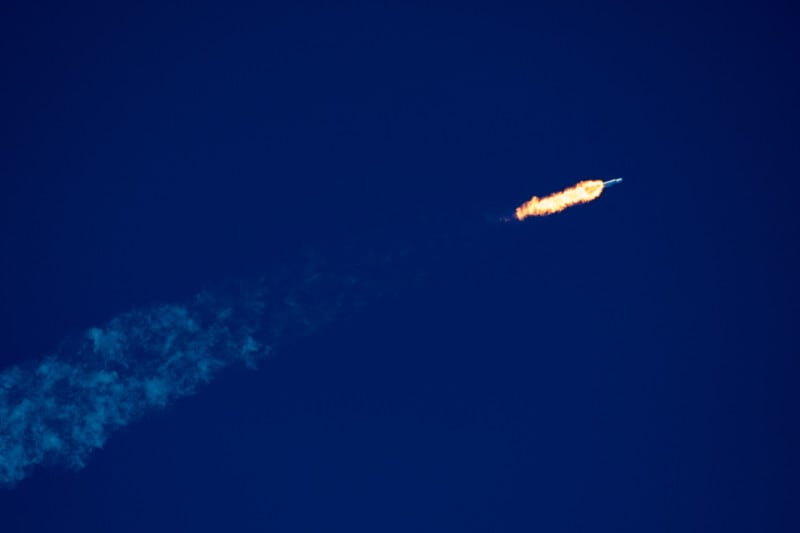 I remember watching the Shuttle launch and land on TV as a child so getting to be a part of such an exclusive family has truly been a dream come true.

P.S. If anyone wants to see more images from this launch or previous ones I have some up here.

Shooting a ‘Character Portrait’ with Joe McNally and Daniel Norton