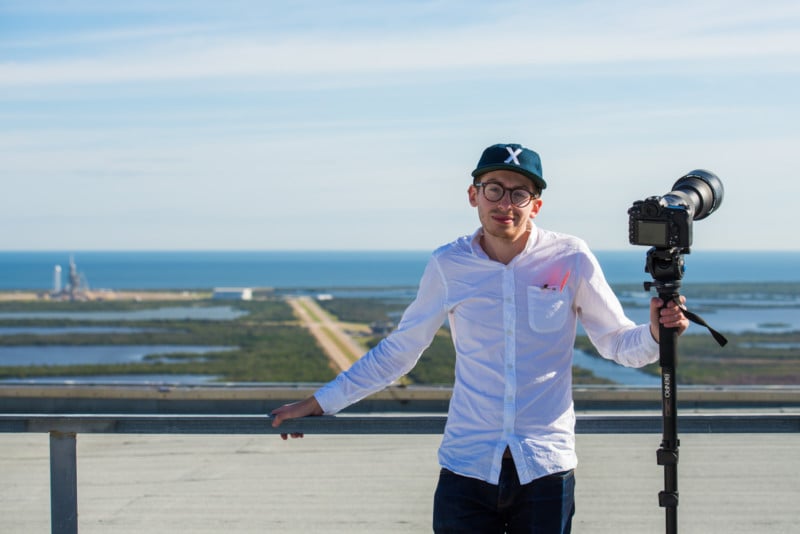 On December 15th, SpaceX launched their 13th commercial resupply mission to the International Space Station for NASA. This launch was special for many reasons. First, I was the first time NASA has been willing to use a SpaceX flight proven booster.

This first stage booster had previously flown on an earlier commercial resupply mission, CRS-11, and it flew itself back to the Cape after separating from the second stage where it proceeded to land only a few miles away from where it lifted off just 8 minutes earlier.

Second, this mission reused a Dragon capsule, the capsule that contains all of the cargo being carried to the International Space Station. It splashed down into the Pacific Ocean after a successful mission and was subsequently refurbished and prepped for another flight into space.

Lastly, this marked the reopening of SLC-40, the launch pad that was destroyed last year after a SpaceX rocket carrying the AMOS-6 satellite exploded just before the test firing of the nine Merlin engines. For all those reasons, I knew I had to be at this launch, hell or high water!

Being from Michigan and living in the country, we don’t get to see too many exciting things like rockets launching and coming back to land themselves. At most, we have a tractor that might set itself on fire every couple years. Starting back in May 2016, my fascination with spaceflight got the better of me and I realized that I could take a vacation from my day job as a portrait, wedding, and sports photographer to photograph rocket launches.

As a kid, I had been absolutely enamored with footage of the Space Shuttle lifting off so getting to be at Kennedy Space Center for a launch was a dream come true. From my first time in 2016 to now, I have photographed four SpaceX missions, two of which for NASAspaceflight.com.

Shooting for one of the largest space news outlets in the world gets me incredible access to set remote cameras on the launch pad, meet the people within these aerospace companies, and photograph launches from some pretty incredible places. For instance, for this latest launch, I was shooting from the top of the Vehicle Assembly Building, the building that assembled every Saturn V rocket that took us to the moon as well as every Space Shuttle that flew. It also happens to be the largest single-story building in the world.

As I mentioned above, I can get access to put remote, sound triggered, cameras on the launch pad. For this launch, CRS-13, I placed four cameras on the pad. One wide angle, two medium shots, and one telephoto to try and get the ever elusive shot of the nine Merlin engines passing through the frame.

Normally this is a relatively simple process. You simply point the camera at the rocket, focus, plug in your sound trigger, and you’re pretty much good to go. For this shot though, it was a bit more difficult. First of all, we didn’t have the rocket to focus on while we set up our cameras. There had been an issue with the second stage so they had to keep the rocket lowered and horizontal on the pad so that meant we had to find the closest object to where the rocket would be, focus on that, and predict its trajectory upward.

Second of all, I really wanted to get the engine shot. It’s something I’ve been dreaming of ever since my first time setting up remotes earlier this year. It’s hard enough to set up this shot when you can see the rocket, but when you can’t it’s nearly impossible. 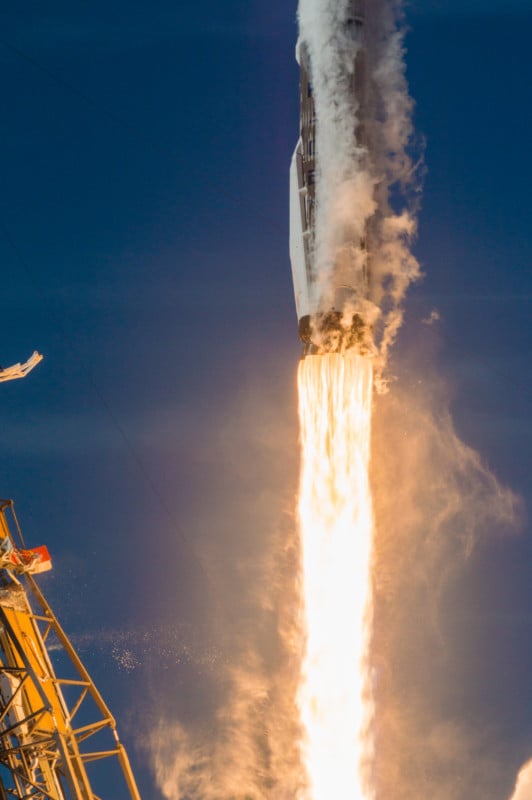 For the shot of the engines I was using a Nikon D3200, a MIOPS Smart Trigger set to “sound” mode, and an old Nikon 70-300 manual focus lens. Typical exposure settings for launches are 1/1000th of a second, at f/8, at 100 ISO, but I kicked the exposure down a few stops to make sure to get the plume detail coming from the engines. Once I got everything focused and plugged in, I then traced an imaginary line from the launch pad base to where the rocket would be as it lifted off and then locked the camera down as firmly as possible because once you leave the launch pad to go back to the press site, there is no back. All you can do, in that time from leaving the pad to the moment it launches, is hope that your cameras all work and you get the shots that you need. 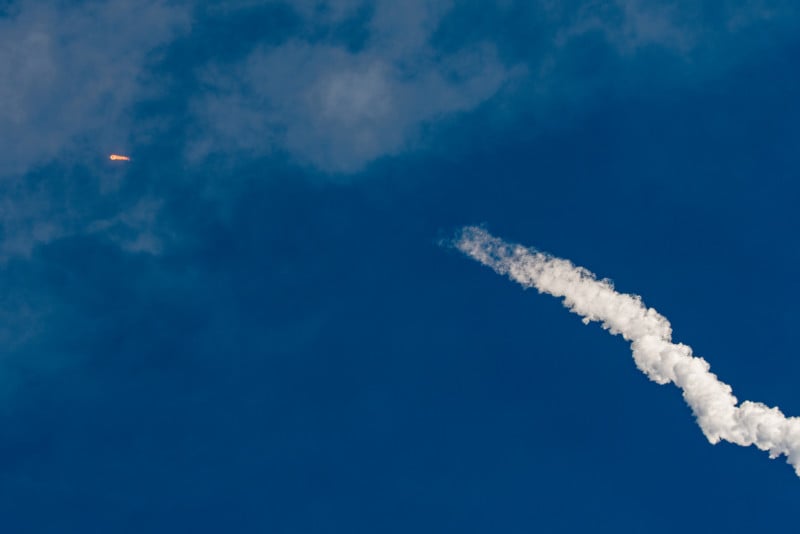 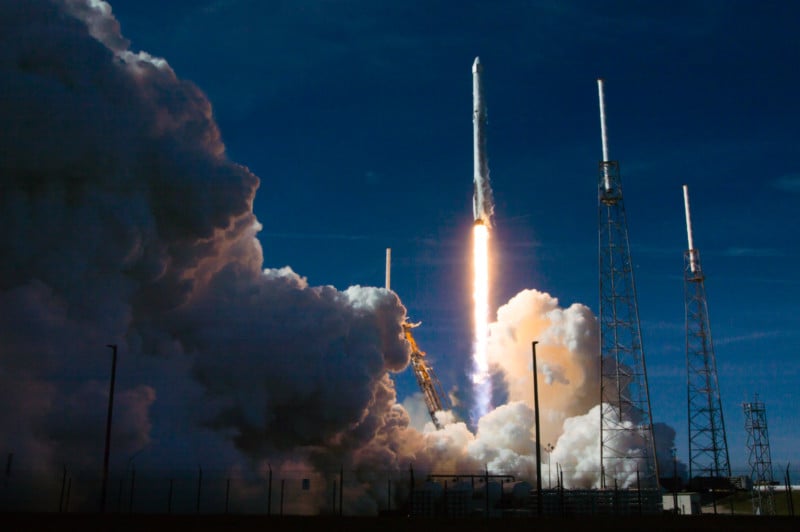 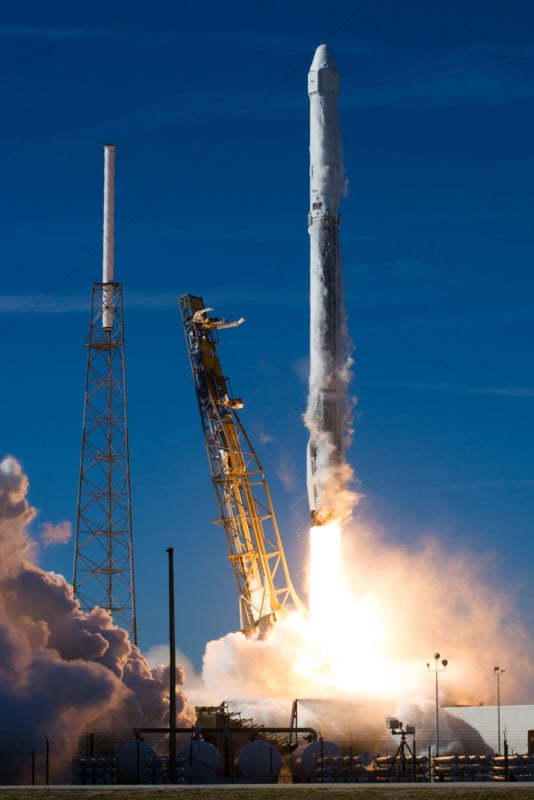 As launch approaches your heart begins to beat faster and even though you are 4 miles away it feels like the rocket is close enough to touch. As the launch director counts down, T minus 3,2,1, you see an enormously bright light coming from beneath the rocket. If you are like me, you are motor driving the camera you have on you to get as many good shots as you can in the extremely brief time that it is visible, only 2-3 minutes if you’re lucky. 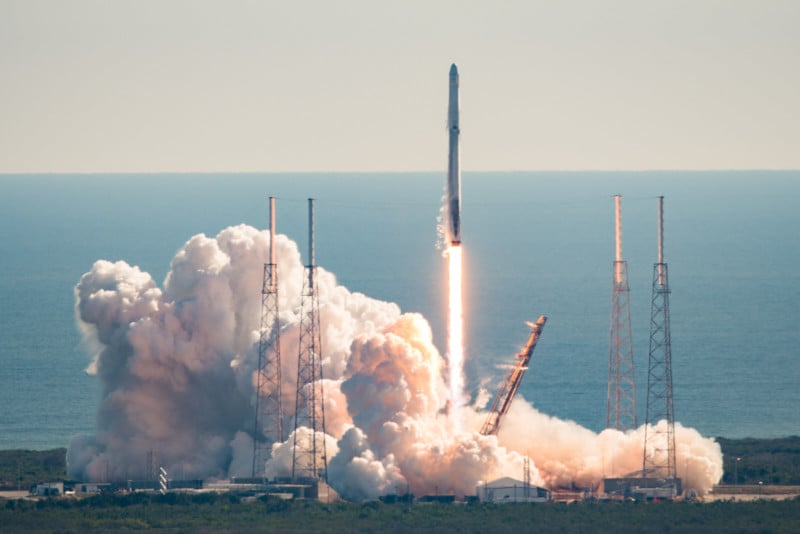 This launch, being a relatively low energy mission to the International Space Station though, also contains a landing. After the 1st and second stages separate, the first stage flips around and flies it’s way back to the Cape, landing only 8 minutes after launch. It was one of the most jaw-dropping experiences of my life! 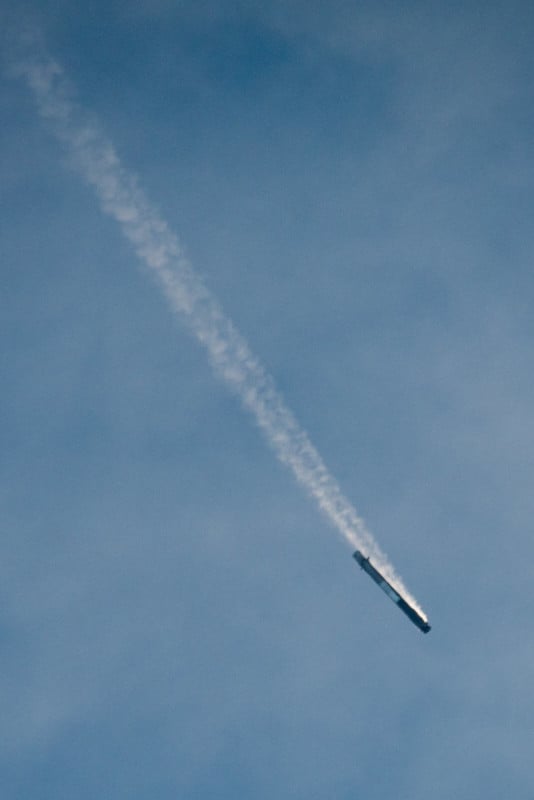 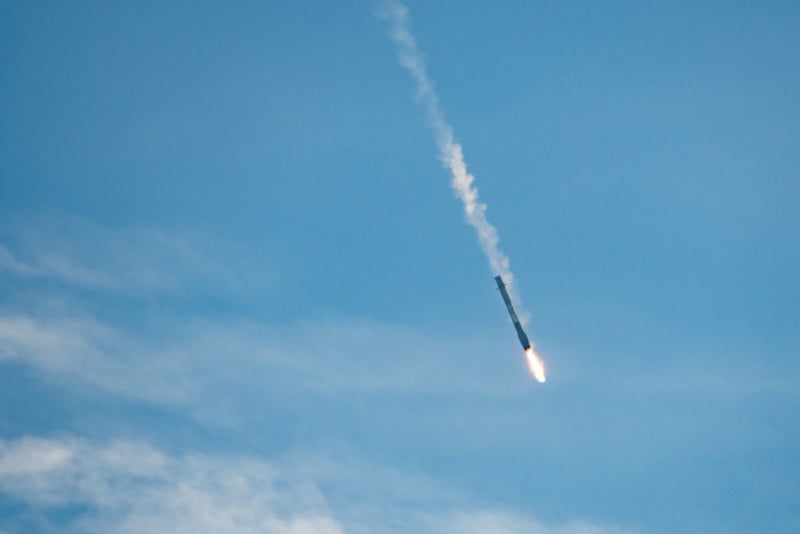 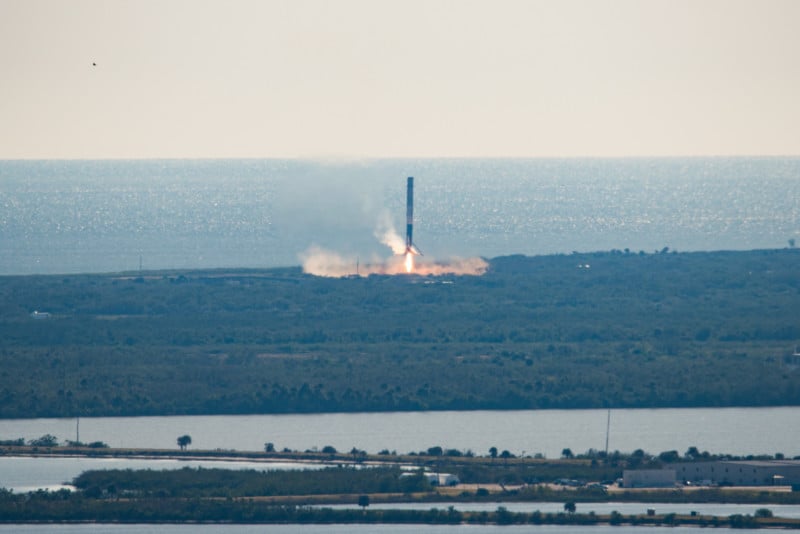 After launch, you have to wait about an hour to go retrieve your remote cameras as they declare the launch pad to be safe. As you approach the pad on the bus you begin to see everyone’s cameras. Some blown over and even some destroyed by the exhaust if they got a little too close. Luckily though, all four of mine survived but were absolutely covered in the dirt and water that was blown out of the flame trench. Before all of that debris covered my cameras, however, they managed to capture these incredible shots of the Falcon 9 making its way into orbit.

Rocket launch photography is like no other genre that I’ve experienced. The adrenaline that kicks in during the countdown and as you see it liftoff is indescribable. It’s going to be hard to shoot better photos than these but with SpaceX’s Falcon Heavy in January, I’m going to do my best!

Although I had to travel a thousand miles lugging around nearly 100 pounds of camera gear and spending a lot of my own money to stay in Florida for the whole week, that engine shot makes it all worth it. It’s a shot that a lot of people attempt but very few get it exactly right. I couldn’t be happier, especially with this being my first try at it!

5 Street Photos to Look Out For While Commuting to Work