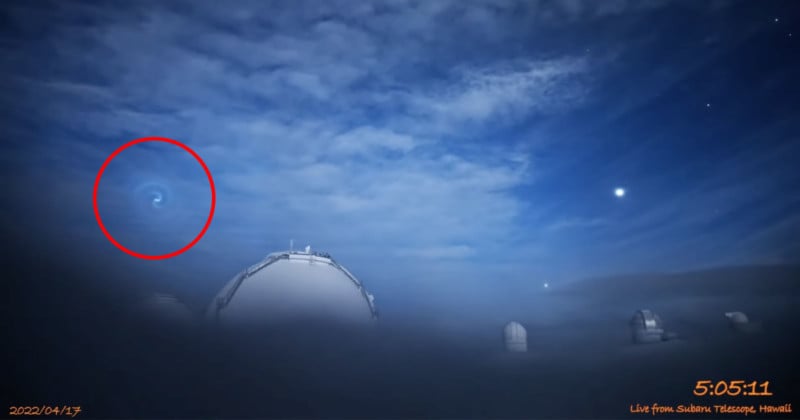 A strange, bright, swirling mass was seen over the skies of Hawaii and was captured on camera by the Subaru-Asahi Star Camera located on Mauna Kea. While some might have thought it was a UFO, it was actually caused by a SpaceX Rocket.

Described as a “luminous spiral” that “spun across the night sky” by SpaceWeather, the unusual object’s swirl looks akin to some of the photos of galaxies that have been captured by the Hubble Space Telescope. But as explained by satellite observer Dr. Marco Langbroek, what witnesses saw was no UFO but instead, the spent post-deorbit-burn fuel vent of the Falcon 9’s upper stage.

Earlier that day, SpaceX launched a Falcon 9 rocket from California’s Vandenberg Space Force Base which was carrying a reconnaissance satellite (NROL-85) into orbit. The live stream of the launch was published to the SpaceX YouTube channel.

The Falcon 9 first stage booster that supported this mission previously launched the NROL-87 mission in February, 2022. Following stage separation, Falcon 9’s first stage returned and landed on Landing Zone 4 at Vandenberg Space Force Base in California. It lifted off at 6:13 AM.

“The post-deorbit-burn fuel vent by the Falcon 9 upper stage used for the launch of NROL-85, which was deorbited over the Pacific Ocean at the end of the first revolution, was seen and filmed from Hawaii, showing the characteristic spiral shape,” Dr. Langbroek explains on his blog.

While the first stage of the Falcon 9 booster is reusable, the upper stage is not. After it launches its payload into orbit, it falls back into the atmosphere and burns up on its way down. That burn and tumble are what can be seen in the video footage captured by the Subaru-Asahi Star Camera.

The appearance of the spiral is due to a similar phenomenon that saw a giant glowing orb fly over the Alaskan sky earlier in April. In that case, a Chinese rocket expelled fuel into space which froze and spread out, reflecting sunlight which made it appear as if it was glowing. The spinning center of the orb was caused by the rocket tumbling end over end.