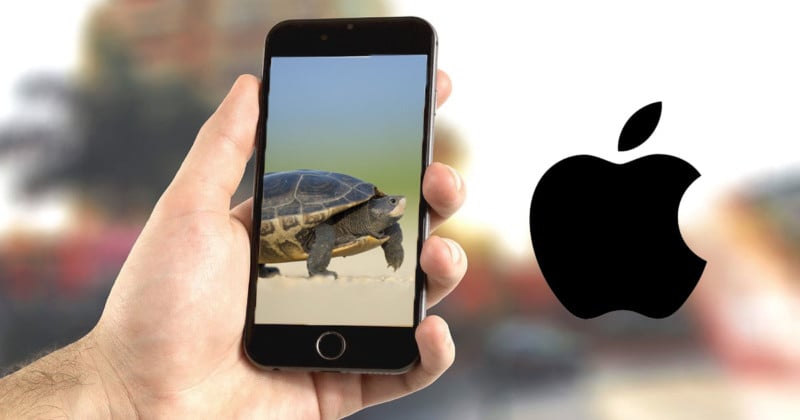 The iPhone has become the digital camera of choice for hundreds of millions of people around the world these days, but if you’ve used your iPhone for more than a year or two, you may have noticed a slowdown in performance. Apple has just admitted that it intentionally slows down aging iPhones, but there’s a non-sinister reason for that.

A couple of weeks ago, iPhone users began talking on Reddit about the fact that replacing old batteries in older iPhones can provide a boost in speed.

So it's true Apple intentionally slow down old iPhones. Proof: My iPhone 6 was bought 3years ago and recently got really slow. APP 'CPU DasherX' shows iPhone CPU is under clocked running at 600MHz. After a iPhone battery replacement. CPU speed resumed to factory setting 1400MHz. pic.twitter.com/pML3y0Jkp2

TechCrunch did some digging and learned that Apple is changing the performance of iPhones as the battery’s performance gets worse over time. Here’s a statement Apple provided to TechCrunch:

Our goal is to deliver the best experience for customers, which includes overall performance and prolonging the life of their devices. Lithium-ion batteries become less capable of supplying peak current demands when in cold conditions, have a low battery charge or as they age over time, which can result in the device unexpectedly shutting down to protect its electronic components.

Last year we released a feature for iPhone 6, iPhone 6s and iPhone SE to smooth out the instantaneous peaks only when needed to prevent the device from unexpectedly shutting down during these conditions. We’ve now extended that feature to iPhone 7 with iOS 11.2, and plan to add support for other products in the future.

There are conspiracy theorists who believe that Apple intentionally slows down iPhones over time in order to make customers shell out money upgrading to newer models. Apple, however, says the slowdown is actually for the owners’ benefit.

Here’s what Apple’s admission means: as an iPhone’s battery gets worse over time, it’s unable to handle the peaks of processing power, which would cause the phone to suddenly turn off. In order to prevent this problem, Apple is making these iPhones slower during these processing peaks in order to smooth them out.

So instead of your iPhone randomly turning off or having other issues (such as freezing up), it may run noticeably slower when apps need heavy processing power.

This latest revelation isn’t sitting well with some people, though: a man in Los Angeles named Stefan Bogdanovich has filed a new class-action lawsuit against Apple for slowing down older phones without his request or agreement.

But the good news is, if you replace your battery, the iPhone will detect that the battery can handle processing peaks again and you’ll see an instant boost in speed.

(via The Verge via Fstoppers)