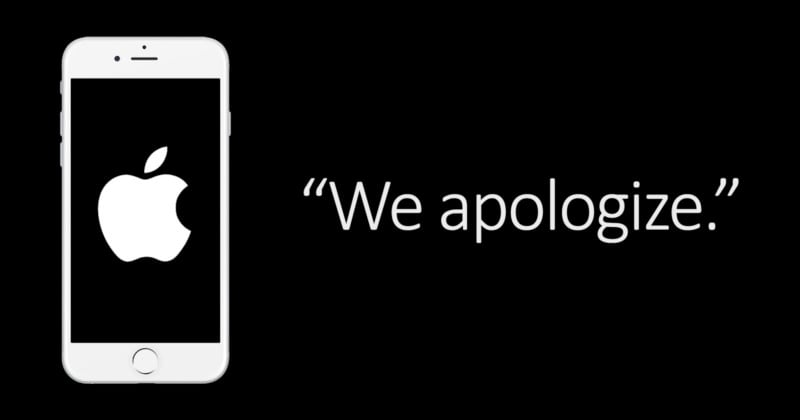 Apple has just issued a public apology for slowing down aging iPhones. The company originally admitted to the slowdown last week, sparking outrage and a flurry of lawsuits against the company.

Last week, after iPhone users on Reddit shared how their iPhones had miraculously become fast again after receiving a battery replacement, Apple admitted that it intentionally slows down iPhones that have aging batteries in order to prevent crashes.

There was a widespread outcry over the admission, as users complained that they had neither agreed to a slowdown nor been made aware of it.

Some even began filing class action lawsuits against Apple. Multiple lawsuits in the United States, France, and Israel argue that iPhone users weren’t aware that replacing their phones’ batteries could have restored full performance, so instead they chose to fork over more money to upgrade to a brand new phone.

As the controversy continues to grow, Apple has just responded by posting a message on its website titled, “A Message to Our Customers about iPhone Batteries and Performance.”

“We know that some of you feel Apple has let you down,” Apple writes. “We apologize.”

The company also says that there has been a lot of misunderstandings and that it would never maliciously reduce performance in order to compel users to upgrade.

“[W]e have never — and would never — do anything to intentionally shorten the life of any Apple product, or degrade the user experience to drive customer upgrades,” Apple writes. “Our goal has always been to create products that our customers love, and making iPhones last as long as possible is an important part of that.”

Apple then shared an explanation of the technical reasons behind reducing performance to improve user experience:

All rechargeable batteries are consumable components that become less effective as they chemically age and their ability to hold a charge diminishes […] A chemically aged battery also becomes less capable of delivering peak energy loads, especially in a low state of charge, which may result in a device unexpectedly shutting itself down in some situations […]

It should go without saying that we think sudden, unexpected shutdowns are unacceptable. We don’t want any of our users to lose a call, miss taking a picture or have any other part of their iPhone experience interrupted if we can avoid it […]

But the problem is, as the batteries continue to age, their iPhones will continue to run slower and slower for owners. And since there’s no suggestion that replacing the aging battery could restore performance completely, iPhone users have been choosing to fork over a significant amount of money in order to upgrade their phones for faster performance.

Apple is making an offer in an attempt to make things right: it’s slashing the cost of an out-of-warranty iPhone battery replacement from $79 to $29. This new service price will be available starting in late January 2018 and will be available to anyone using an iPhone 6 or later. The $29 price will last at least through December 2018.

In 2018, Apple will also be releasing an iOS update that will give iPhone owners more information about the health of their phone’s battery for more transparency.

“At Apple, our customers’ trust means everything to us,” Apple concludes. “We will never stop working to earn and maintain it.”

Update: HTC, Motorola, Samsung, and LG say they do not slow down their phones with older batteries.