Dual cameras have become ubiquitous in the smartphone world, and with them has emerged a new technique for simulating a shallow depth of field — the feature commonly called ‘Portrait Mode’. This 10-minute video from Marques Brownlee explains how it works, and it also pits Portrait Mode on an iPhone X, Note 8, and Pixel 2 against the $8,000 medium format camera Hasselblad X1D. 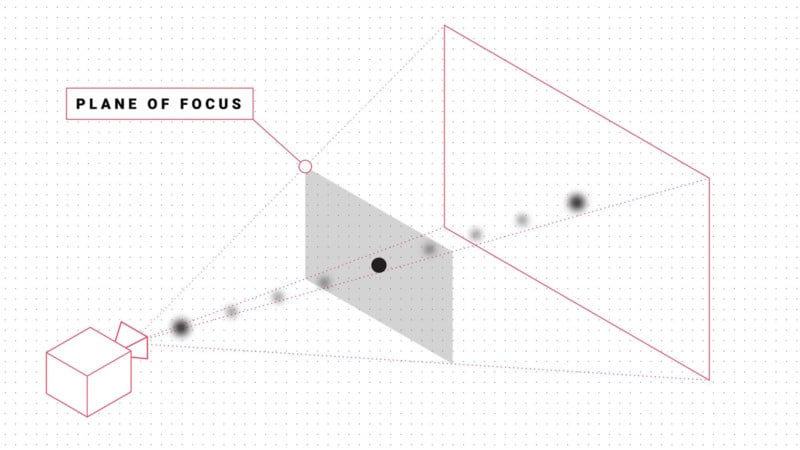 Because a smartphone’s sensor is so small and the field of view is so wide, most of the time everything in a normal photo taken with the phone’s camera will be in focus. Portrait mode simulates a shallow depth of field by using edge detection and/or depth mapping to differentiate between the foreground and background. It then blurs the background, simulating that shallow depth of field and making the foreground pop. 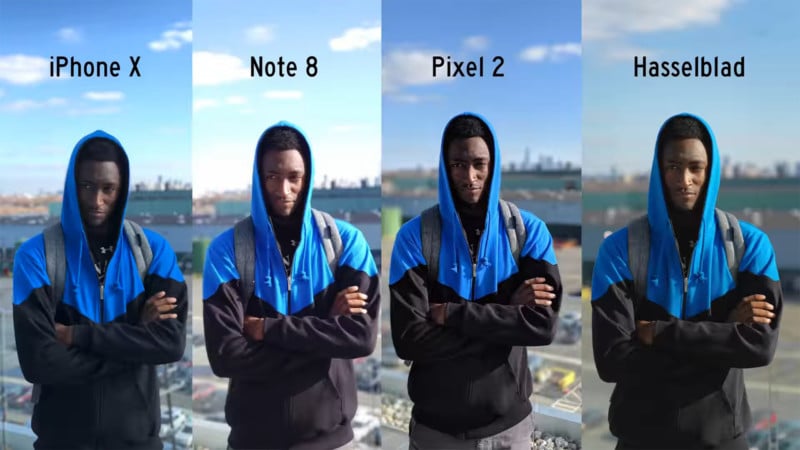 As Brownlee says, the iPhone X and Note 8 use depth mapping to figure out what is in the foreground of the image. These smartphones use data from the wide angle and telephoto lenses to create a depth map, and then artificially blur objects depending on how far they are from the in-focus subject.

The Pixel 2 takes a different approach — it utilizes pixel splitting to create a depth map and machine learning helps to identify the subject and create a mask. Because it doesn’t rely on two distinct lenses like the iPhone X and Note 8, the Pixel 2 is able to take Portrait Mode shots from the front-facing camera. 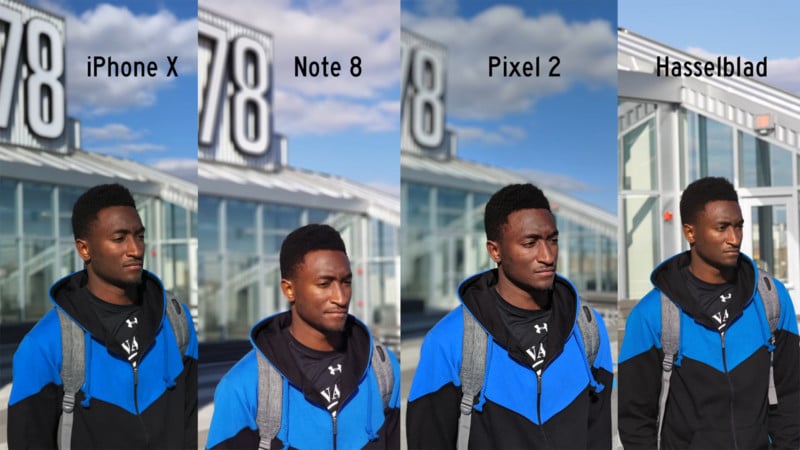 The resulting images from the phones differ, Brownlee discovered. The iPhone X appears to focus the face at the expense of everything else, often resulting in blurred hair, ears, or even other objects in the same plane of focus as the face. The Pixel 2 seems to do a better job of keeping the entire subject in focus, but applies very strong sharpening to the foreground and aggressively blurs the background, resulting in a less natural looking image. The Note 8 is somewhere between the two.

Brownlee makes the point that the capabilities of smartphone camera software and hardware are increasing at a rate much faster than traditional cameras are. Features like increasing the amount of background blur after the shot is taken or the artificial lighting effects like those that the iPhone X offers are things that traditional cameras do not have.

The ability for smartphones to simulate ‘real’ cameras is improving every year and to the untrained eye, it can already be difficult to differentiate. With the relentless yearly cycle of smartphone updates, their capabilities continue to close in on mirrorless and DSLRs.

“I think you and I will always be able to tell the difference if you pixel-peep enough between a smartphone camera and a big sensor just because of the physical constraints of trying to make such a small sensor do such big things,” Brownlee concludes. “For that reason, the big cameras will always have their place — professionals will always buy that. But [smartphone] cameras are getting so good.

“The best camera really is still just the one you have with you.”