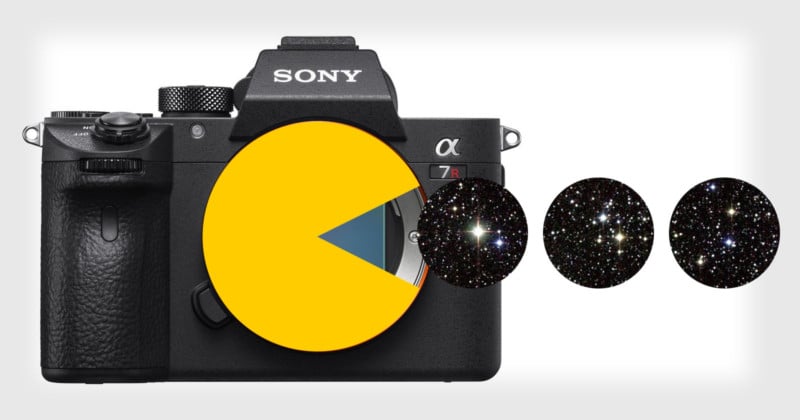 Has Sony actually fixed its “star eater” issue in the new a7R III? Photographer Drew Geraci tested the camera earlier this month and found that the problem “is no more,” but now new reports are suggesting that the a7R III does indeed still “eat” stars and cause them to disappear in long exposures.

DPReview sent engineer Jim Kasson a set of star photos from the a7R III to analyze, and after analyzing the spectra and generating a series of graphs, Kasson concluded that “the Sony a7R III eats stars.”

“It turns out that the spatial filtering, which is called the ‘star eater’ algorithm because of its effect on some kinds of astrophotography, is readily identifiable by looking at Fourier transforms of dark-field exposures,” Kasson writes. “You don’t need to shoot stars to tell whether the camera has an appetite for them.”

DPReview writes that after it examined star photos shot with both the a7R III and a7R II (running its latest firmware), only stars larger than 1 pixel appeared in the images, “suggesting that smaller stars are indeed ‘eaten’ or dimmed due to a spatial filtering algorithm.”

“This is a missed opportunity for Sony, and something dedicated astrophotographers will want to consider […],” DPReview says. “But for now, we can say this with confidence: while a lot of stars still survive ‘Star Eater’, the a7R III continues the trend of noise reduction that dims or erases small stars at exposure longer than 3.2s.”

These findings contradict Geraci, who found through examining his photos that there doesn’t seem to be any noticeable difference in the number of stars between 3.2- and 10-second exposures:

Geraci says he agrees with Kasson’s findings but disagrees with his (and DPReview‘s) assessment that this is an issue astrophotographers need to worry about.

“Jim is correct in the fact that spatial filtering is still ‘active’ on the camera, but to the degree in which it actually affects the image is another story,” Geraci tells PetaPixel.

“If you do a side by side comparison of the a7R II IQ vs that of the a7R III IQ (from 2.5″ up to 5″ which is the range in which the original debacle began) you can visually see no change in star depth, and in all cases the stars increase in brightness value (as they should as the exposure increases),” Geraci says. “Compare that to the A7RII, where stars are literally being deleted, and it’s another story.

“A change in .06 to -.06 DB worth of spatial filtering, while present, I believe does not affect the image to the point it’s going to ‘eat’ stars, which is what my photos are meant to prove. I would love to see some of Jim’s tests actually showing it visually, verse that of a graph chart and a photo taken of a black body cap.”

Geraci also points out that comparing Kasson’s latest findings to his previous data on the a7R II, spatial filtering was 2 or 3 times higher in the a7R II compared to the a7R III.

“My honest opinion is that it’s a pixel witch hunt,” Geraci says. “I definitely wish Sony would give us a full uncompressed spatial filter free shot (and it may be coming) but also believe the situation is getting blown way out of proportion.”