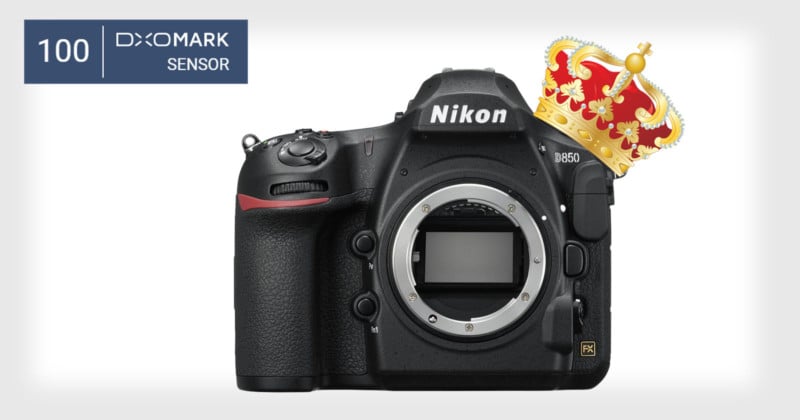 The Nikon D850 was just awarded the first full 100 overall score ever given out to a DSLR by the testing lab DxOMark. The D850 now sits alone in the top spot on the camera leaderboard, with the full-frame mirrorless Sony a7R II sitting at #2 with a score of 98.

This is the first time a full-frame backside-illuminated sensor has appeared in a Nikon camera, and it’s a sensor that “breaks new ground for image quality,” DxOMark says. The D850 has the best color and dynamic range at base ISO among all commercially available cameras tested by the lab — it’s so good it rivals medium format sensors in some aspects.

“At base ISO, the Nikon D850 image quality for color is unrivaled for a DSLR, although the mirrorless Sony A7R II and full frame compact RX1R II comes pretty close,” DxOMark writes. “The D850’s color is on par with the best results we’ve seen on medium-format sensors, such as the Phase One IQ180 digital back, and fractionally ahead of the Phase One P65.”

The D850’s low-light ISO performance isn’t as top-notch as its other attributes, but DxOMark says it’s “still a very acceptable result” that “fares pretty well.” The camera produces fairly low noise up to ISO 3200 and can be pushed further with noise reduction software during post-processing.

“The first DSLR to hit 100 points […] puts the Nikon D850 in a class of its own for image quality,” DxOMark concludes. “At base ISO, it’s unrivaled for color in the DSLR class, and its headline dynamic range score is outstanding, too.

“So if you’re looking for the best image quality at low ISOs, at significantly less cost than a digital medium-format camera, the Nikon D850 looks like the camera you’ve been waiting for.”

RevolCam: A Multi-Lens and LED Light Attachment That Fits Any Smartphone

This is the First 360-Degree Video of an ISS Spacewalk