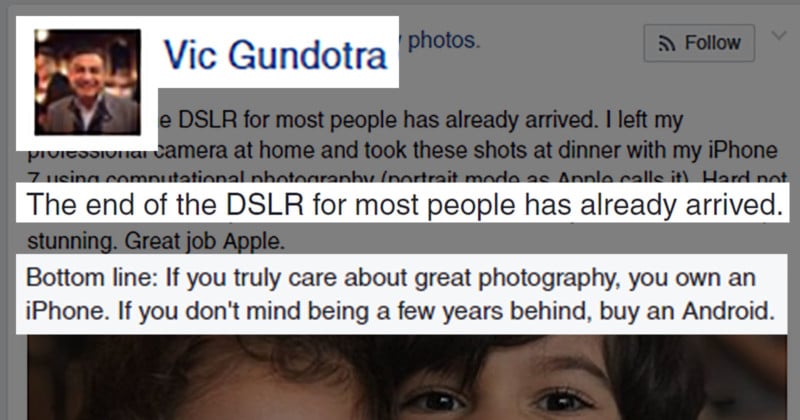 The iPhone camera just received praise from a rather unexpected source. Former Google SVP Vic Gundotra has glowing things to say about his iPhone 7’s photo capabilities, claiming that the phone marks “the end of the DSLR era for most people” and that it’s years ahead of Android smartphone cameras.

Gundotra was the Senior Vice President of Social at Google until 2014. While serving in that position, he was closely linked with Google’s photography technologies. In 2012, one of his photos revealed that Snapseed was coming to Android. The following year, he spoke about improving the photo experience on Google+, where 1.5 billion photos were being shared per week.

That’s why it was surprising this past weekend when Gundotra took to Facebook to wax lyrical about his iPhone 7’s camera.

“The end of the DSLR for most people has already arrived,” Gundotra wrote while sharing two Portrait mode photos of his kids at a restaurant. “I left my professional camera at home and took these shots at dinner with my iPhone 7 using computational photography (portrait mode as Apple calls it). Hard not to call these results (in a restaurant, taken on a mobile phone with no flash) stunning. Great job Apple.” 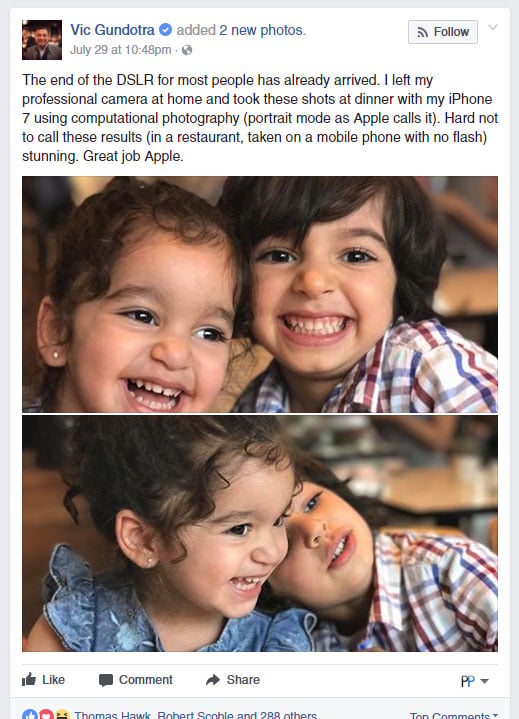 After a commenter responded that the Samsung S8 is even better at photography than the iPhone 7, Gundotra countered by saying that the iPhone’s photo capabilities are years ahead of any phone camera powered by Android, which is developed by Google.

“Here is the problem: It’s Android,” Gundotra writes. “Android is an open source (mostly) operating system that has to be neutral to all parties. This sounds good until you get into the details. Ever wonder why a Samsung phone has a confused and bewildering array of photo options? Should I use the Samsung Camera? Or the Android Camera? Samsung gallery or Google Photos?

“It’s because when Samsung innovates with the underlying hardware (like a better camera) they have to convince Google to allow that innovation to be surfaced to other applications via the appropriate API. That can take YEARS.

“Apple doesn’t have all these constraints. They innovate in the underlying hardware, and just simply update the software with their latest innovations (like portrait mode) and ship it.

“Bottom line: If you truly care about great photography, you own an iPhone. If you don’t mind being a few years behind, buy an Android.” 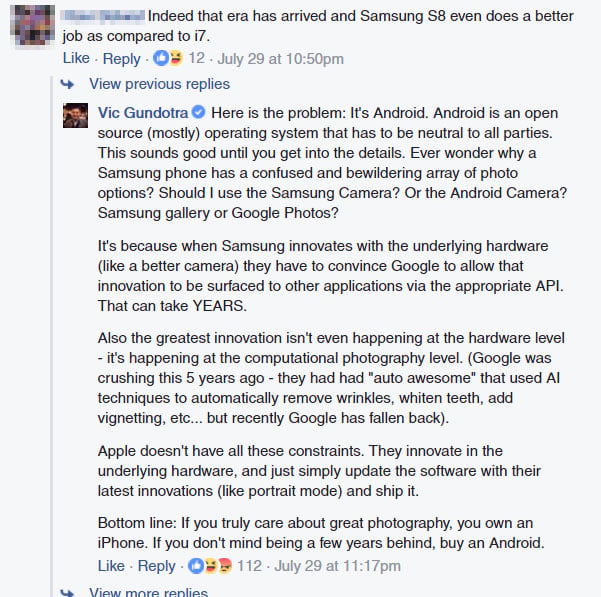 “By the way, I ran all of Google’s mobile efforts from 2007-2010,” Gundotra continues in a separate comment. “I was SVP of engineering. So I understand this topic reasonably well. I would NEVER buy an Android phone again if I cared about photography.”

When Google announced the Pixel Phone in October 2016, a month after Apple announced the iPhone 7, Google boasted that the Pixel contains “best smartphone camera ever.” It seems that at least one former Google senior executive begs to differ.

Shooting Tethered Pays Off: A Guide for Photographers