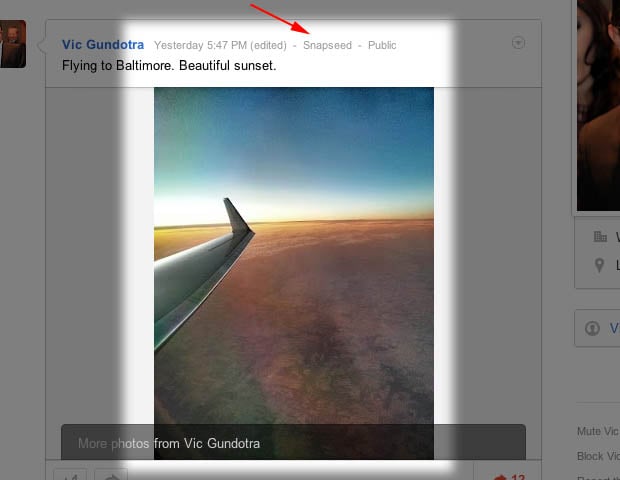 Google recently reaffirmed its commitment to keeping recently-acquired Nik Software‘s high-end photography tools alive, which led some to believe that Snapseed — Nik’s popular photo editing app — would be neglected or shuttered. That doesn’t appear to be the case.

If you look at the Supported Platforms page on the Snapseed website, you’ll find a note that says Android support is “coming soon”. How soon? Well, Vic Gundotra — Google’s SVP of engineering and a major player in the Nik deal — has leaked through his Google+ page that Snapseed for Android is already up and running.

On a flight to Baltimore yesterday, Gundotra posted a photograph shot through his airplane window. The annotation on the post states that the app used to upload the photo was Snapseed. Take a peek at the photo’s EXIF data, and you’ll see that the Make and Model of the camera used to shoot the image was SAMSUNG SCH-I535, otherwise known as the Samsung Galaxy S III — an Android phone.

If you’ve been discontent with photo editing options on your Android device and have been waiting for Snapseed to arrive, get your $5 ready — the app looks like it’s coming in the very near future.

Using the Rare Canon 50mm f/1.0 and Its Bokehliciously Thin Depth of Field