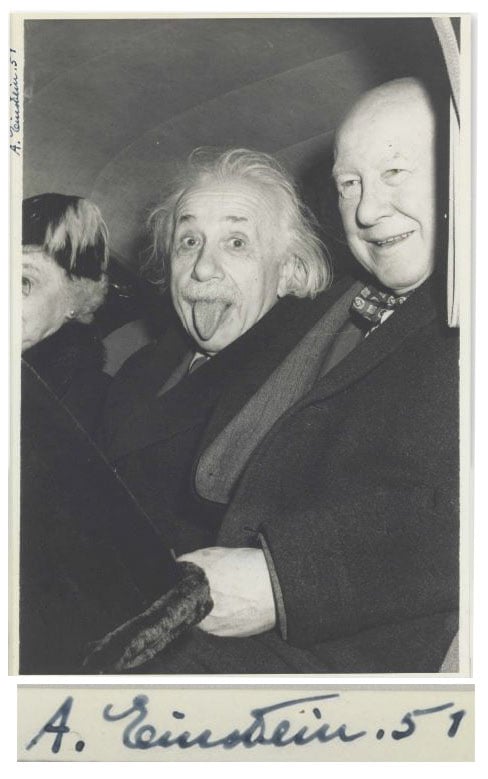 An iconic photo of Albert Einstein just sold at auction for $125,000. The photo of the famous scientist sticking out his tongue was also signed by Einstein himself.

The picture was captured on March 14th, 1951, by United Press International (UPI) photographer Arthur Sasse after Einstein’s 72nd birthday celebration at The Princeton Club. Sasse was trying to get Einstein to smile for a picture, but Einstein decided to mix things up and put on a silly face instead.

The photo became one of the most popular ever made of Einstein and is commonly found on merchandise and prints. Einstein himself loved the photo so much that he requested 9 photos from UPI for personal use. One of these signed photos was sold at auction for $74,324 in June 2009, making it the most expensive Einstein photo in the world.

That signed print has been supplanted by this latest auction, which was held by Nate D. Sanders Auctions and ended yesterday. Here’s the auction description:

Very rare photo signed by Albert Einstein, on the occasion of the Nobel Prize winner playfully sticking out his tongue to a group of photographers on his 72nd birthday. Photo was snapped on 14 March 1951 by Arthur Sasse, a UPI photographer whose employers were at first hesitant about publishing the iconoclastic image of Einstein; when they did, Einstein was so amused by it that he ordered several prints to give out to close friends. This image is unlike most which crop the photo to show only Einstein. Here, the photo is shown in its full context with Einstein seated between Dr. Frank Aydelotte, head of the Institute of Advanced Study in Princeton, and Aydelotte’s wife, after celebrating his birthday at the Princeton Club. Photo is signed along the left margin ”A. Einstein .51”, indicating he signed the image shortly after it was taken. Photo measures 7” x 10”. Very good to near fine condition. Extraordinarily rare photo signed by Einstein, the most famous and beloved image of him.