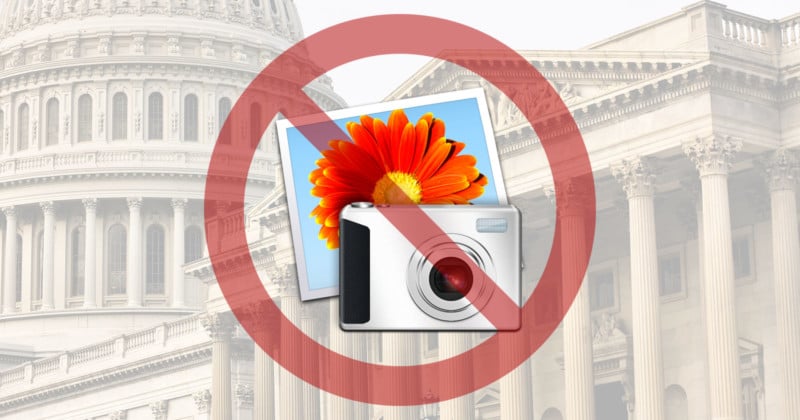 Capitol Hill police officers in D.C. are being accused of violating the First Amendment after reports emerged that journalists were forced to delete photos and videos of protests at the Senate.

The Daily Dot reports that protesters stood in the hallway outside of the Senate chamber yesterday to voice their opposition to ongoing efforts to kill the Affordable Care Act, also known as Obamacare.

In response to loud shouts of “kill the bill, don’t kill us!” and “shame!” directed at lawmakers, the sergeant at arms present made the decision to “restore order in the chamber.” Protesters were then handcuffed and removed from the hallway, and reporters standing were instructed to not take any photos and to delete anything they’ve already captured.

“No photos,” the police reportedly told journalists. “Delete your photos.”

Reporters blocked from Senate halls where protesters being arrested, shouting, "Kill the bill!" Being told, "no photos. Delete your photos."

About 10 protesters were handcuffed & removed from hallway outside Senate chamber. We were told it's a "crime scene" & not to take photos

Reporter Andrew Desiderio of The Daily Beast says he was forced to delete a video he shot:

Capitol Police made me delete the video I recorded. https://t.co/NQH2fLFYiO

Federal courts have repeatedly affirmed that anyone has the right to take photos (including of police themselves) as long as they’re in a public place and not doing anything wrong — it’s a constitutional right protected by the First Amendment.

“Police may not delete photographs without a warrant, period,” the ACLU says. It also encouraged any journalist that was forced to delete photos to contact the DC chapter.

Police may not delete photographs without a warrant, period.

If you think your rights were violated by Capitol Police, contact @ACLU_DC. https://t.co/6fdvuIoOgB

“If this is true (and there is quite a lot on social media about these unconstitutional orders) I am looking in who to best contact at the Capitol Police and the Sergeant-at-Arms about this,” NPPA General Counsel Mickey Osterreicher tells PetaPixel.

"No photos" in a public place where person recording has a legal right to be present & "delete your photos" are constitutional violations https://t.co/SqMWhTb8ck

“When in public spaces where you are lawfully present you have the right to photograph anything that is in plain view,” the ACLU states in its Know Your Rights web page for photographers. “Police officers may not confiscate or demand to view your digital photographs or video without a warrant.”

Senate staff and the Senate Press Gallery responded to the controversy by stating that photography has long been banned on the 3rd floor of the Senate wing of the Capitol:

Capitol Police says a member of the Sergeant at Arms asked reporters to delete video footage taken of yesterday's protest at the Senate. pic.twitter.com/gcBLjZJBfy

Reminder to our membership: Photos and videos are prohibited on the 3rd floor of the Senate wing of the Capitol, and have been for decades.

Nobody should be forced to delete photos but also rule is no photos on 3rd floor. Reporters agree to follow rules by accepting credentials. https://t.co/X2ROAEq0rt

Even if photography is technically banned in that space, however, that doesn’t allow police to force the deletion of photos.

Do. Not. Delete. Them. That's not how this works. Police can't make journos delete photos/video. https://t.co/IQl4W2kbyI

“Police may not delete your photographs or video under any circumstances,” the ACLU writes in its Know Your Rights guide. “Officers have faced felony charges of evidence tampering as well as obstruction and theft for taking a photographer’s memory card.”

Update on 7/27/17: The NPPA has sent the following letter to the Chief of the U.S. Capitol Police and the Senate Sergeant at Arms:

Image credits: Header illustration based on photo by Phil Roeder

TSA Requires a Separate Screening of Cameras in Airports Now