Instead of sleeping last Tuesday night, Baltimore-based photographer Aryeh Nirenberg decided to drive 3 hours to Assateague Island off the coast of Maryland and spend the night under the stars with his Sony a7S II. This dazzling 42-second, 4K time-lapse is what resulted.

All the photos were captured using the a7S II — Nirenberg’s first time taking the camera out — and a Tamron 15-30mm f/2.8 lens.

The video is “a timelapse of the beautiful night sky at Assateague Island National Seashore in Southern Maryland,” Nirenberg says. “The video starts with the quarter moon illuminating the sky and you can watch the sky get darker as it sets. At the end of the video you can see Venus rising and dawn light taking over the darkness.”

That “lightning” you see flash across the sky at around 16 seconds is actually a firefly that left a light trail in a frame.

Also, at one point in the night, a pair of Canada geese swam into the frame and were still enough during the 20-second exposures to show up clearly with the Milky Way in the background: 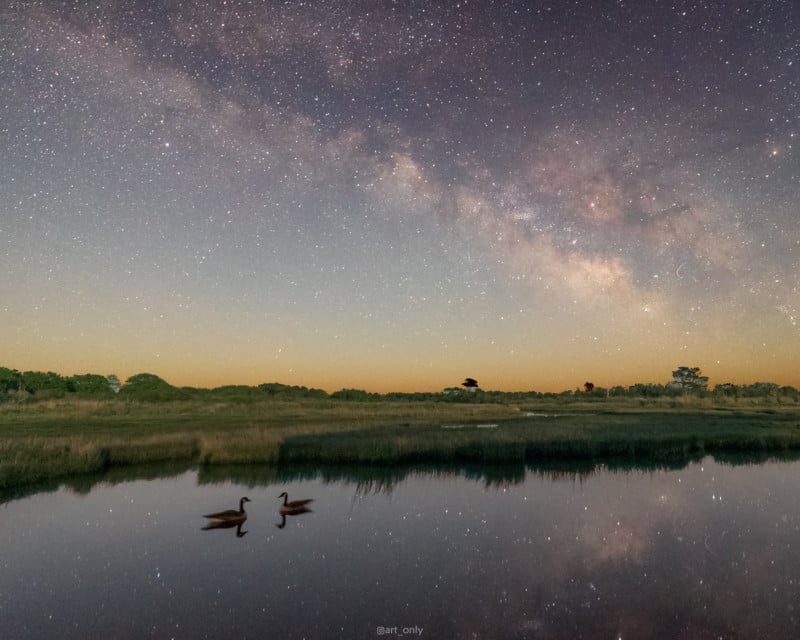 “I connected a USB portable charger to the camera so it doesn’t die after 2 hours like Sony cameras usually do, and I used the timelapse app as an intervalometer to trigger the shutter every 21 seconds,” Nirenberg says.

Each of the 1,027 photos he shot that night were captured at 15mm, f/2.8, 20s, and ISO 10000. Lightroom and LRTimelapse were used to combine the images into the timelapse seen above.

You can find more of Nirenberg’s work on his Instagram and 500px.

Photoshop Trick: How to Swap a Photo Background Using Only Blend Modes