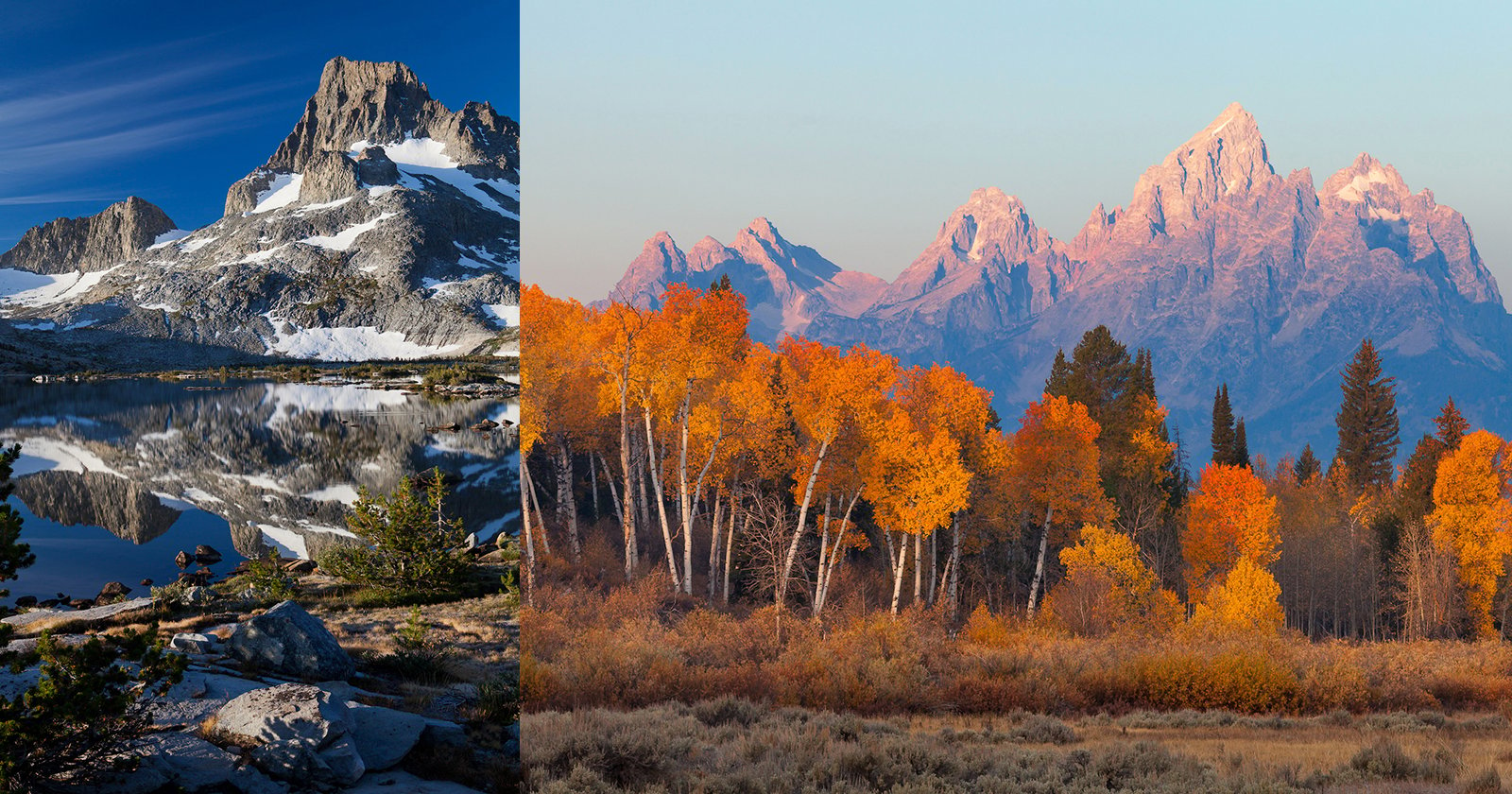 Hang around a group of landscape photographers long enough, and you’ll undoubtedly hear them talking about location scouting.

As the saying goes, understanding your subject better will improve your photographs of that subject. This is true for all kinds of photography (wildlife, architectural, portrait), and landscapes are no exception. Location scouting is the process of getting to know a particular landscape better, and is an important aspect of improving your landscape photography.

Before we talk about the nuts and bolts of how to conduct a proper location scout, let’s talk about various types of scouting and how each might bring a new perspective on an imperfect landscape.

Location scouting can be done long before the final photo is taken, sometimes even years. Any time I visit an area for landscape photography, I not only try to create the best photograph I can at the time, but I also imagine what the scene might look like during different times of the year.

Would that alpine meadow make the perfect foreground if only it were covered in wild flowers? Would those high mountain slopes pop if the aspen groves were in peak fall colors? Or if the tree line was blanketed with fresh snow?

Sometimes certain areas don’t look very good when I first visit, but in a different season, it would shine. In those cases, I make a mental note to come back in the season I think will show the area at its best, and do research to find out optimal timing for those seasonal elements.

But while I’m there, I can spend the time finding some of the shots that I will eventually take, even if it ends up being years later.

In this example, I first visited Ponytail Falls in Oregon’s Columbia Gorge in late Fall when the trees were bare and the moss on the river’s rocks was brown. It was still a pretty scene, but I knew that by visiting the same area in the Spring, I would green up the scene, and catch the falls at peak water flow.

I returned in Spring a couple years later to capture the photo above. Having already scouted the area and set up my shot made the return trip easy, as I had already formulated my target compositions in my mind.

Scouting for a Different Time of Day

Scouting an area for a future season is an extreme example of the practice. More often, we’re scouting in anticipation of different light on the scene.

Examples include visiting an area in the evening in anticipation of sunrise light, visiting midday while waiting for a beautiful sunset, or even waiting for a passing squall to reveal the full glory of its post-storm light show.

The photo above was taken on a trip to Grand Teton National Park with some friends. We scouted out a beautiful aspen grove in full Fall foliage with the Tetons rising behind; however, the sunset we were hoping for failed to materialize with heavy cloud cover all the way to the western horizon.

One of my friends suggested that although we had been targeting this location for a sunset, it might actually look spectacular at sunrise, as both the Tetons and the aspen grove would be front lit, slightly from the left. This would give definition to both the mountain and trees, and hopefully the sunrise would reveal some of that nice fall color throughout the grove.

With another visit in mind, I spent some time composing the shot above, in anticipation of sunrise light.

A couple of days later, I was rewarded by the preparation. We arrived just before dawn, and because of my earlier visit, I knew exactly what my composition would look like.

I quickly reset the shot based on GPS coordinates I took the previous visit. Using the exact spot I had set up in previously, as well as my reference shot from two days earlier, I took all the guesswork and stress of finding a shot that morning. Now it was just a matter of waiting for that beautiful light to brush through the aspen grove and make those yellows and oranges glow.

The last type of scouting (and often the most frantic) that I do is what I call the “on-site.” This stems from me showing up unprepared, but still needing to quickly assess the area and find those great compositions that convey the essence of the area to the viewer.

This is much easier done when showing up for a sunset shoot, because you typically have a few hours of daylight in which to scout and set up your shot for the magic hour. On-sight scouting for a sunrise shoot is much more difficult, because even if you show up early, you have to wait until pre-dawn light before you can see the scene well enough.

It is very hard to create compositions in the pitch black of night!

The photo above was the result of one of those rare pre-sunrise on-sight scouts.

This shot was taken on my first trip to Death Valley National Park in the salt pan near Salt Creek. As I walked out onto the dried salt bed, I was surrounded by a thick salt crust. While this could make for an interesting foreground, it felt a little too overbearing to balance out the distant mountains; however, I had never been here before, and I didn’t quite know where to go.

As I saw the sunlight start creeping down the mountain face, a composition suddenly came to me. I wanted to contrast the bright red of the sunlit mountains with the blues of the still-shaded salt. Unfortunately, the thick crust of salt wasn’t working for me—I needed a much more delicate salt ridge pattern that gave more emphasis to the structure of the salt in between the ridges.

I quickly scanned the ground to the North and South, looking for a ground pattern that would help fulfill that vision. In the distance to the South, I saw something that might work but had only a few minutes to get there and set up before the light would flood the salt pan itself, ruining the color contrast effect.

I heaved my tripod (camera still attached) over one of my shoulders and ran as fast as I could across the pan. As I got close, I could see that this foreground would work out perfectly. Down went my tripod, already set up to the right height with the right, wide angle lens attached. Less than a minute later, the sun was just touching the lower slopes of the mountains, creating the beautiful color separation I was hoping for.

Now that we’ve gone over the various types of location scouting, how does one actually go about doing this? You’ve arrived to a spot with several hours to spare, but now what?

For landscapes, there are three major elements I’m thinking about combining to create my composition—background, mid-ground, and foreground. The goal of scouting is to essentially find each of these elements that you want to add together to create a potential composition.

If the lighting is great while you’re there, wonderful. You may luck out and get your ideal photo of that location. But more often than not, it helps to think about other times or seasons in which to capture the scene. Backgrounds are easy—these are the huge dominant aspects of a landscape that typically draws you to the area in the first place.

In my typical compositions, this is usually a mountain, ocean, or waterfall. In the photo above, I was backpacking at Thousand Island Lake in the Ansel Adams Wilderness of the Sierra Nevada. Banner Peak is a dominant feature of that area and hard to ignore. I knew well before my trip that I wanted to capture this massif at sunrise. One element down.

A middle ground typically ties your foreground and background together. Every landscape doesn’t need a middle ground, but I’m always assessing the area around me to find some element that will compliment, or draw the viewers’ eyes toward the background.

In this case, Thousand Island Lake itself was a no-brainer. It was a calm morning and Banner Peak cast a strong reflection, doubling the impact of the mountain. Now just to find a proper foreground to lead the viewers eye into the frame, and balance the strength of the mountain.

The perfect foreground usually takes some searching to find—if you see a photographer wandering around looking at their feet, this is likely what they are doing.

If the angle of the lens is very wide, these foreground elements can sometimes be very small. You can often find several good options for foregrounds using the same middle and background elements. If so, shoot them all!

In this case, walking along the shoreline of the lake led me to a line of rocks breaking the reflection of the deep blue sky. Perfect elements to draw the viewers eye toward the reflection and up to the peak itself. With my shot in the bag, I headed back to camp for my morning coffee.

Today’s information age brings us many advantages in learning about far away places. Although I think nothing beats learning about a location like visiting it yourself, I often utilize digital exploration techniques before I go somewhere to photograph it.

This helps me get my bearings and start to think about what kinds of photographs I’m going to attempt. While I won’t go into detail here, tools such as the Photographers Ephemeris, Google Maps 3D, and Google Maps photo overlay help in seeing what others have captured in the area, as well as planning your own trip.

I often shoot remote mountain locations while backpacking. Every time I pull into a new campsite, I drop my pack and start scouting the surrounding area, thinking about sunset that night, and also sunrise the next morning.

As I had never been to Davis Lakes in the Sierra Nevada before, I spent a good deal of time researching the area using the tools above. Based on the time of year and angle of the sunrise, I knew that sunrise light on the peak of Mt. Davis reflected in the lake would look fantastic.

When I arrived at my predetermined campsite, I set about finding a composition that would lead the viewer’s eye right up to that beacon of light in the frame. In order to do this, I had to pre-visualize what it might look like the following morning. The next morning, I emerged from my tent and set up in the exact spot I had scouted the previous evening. Now I just had to wait for the light until it was perfect.

Next time you think of a new area you’d like to photograph, spend time beforehand learning about that location. Give yourself plenty of time to explore the area on foot, setting up several potential shots that might work well in the right lighting conditions. Above all, if mother nature does not cooperate with your photo endeavor, don’t despair! Just chalk it up to a valuable scouting trip.

About the author: Hank Christensen is a freelance photographer specializing in bird, landscape, and adventure stock photography. His work has been published on the cover of Outdoor Photographer and Bay Nature, and you can see more of his photos on his website, blog, Instagram, and Facebook. This post was also published here.