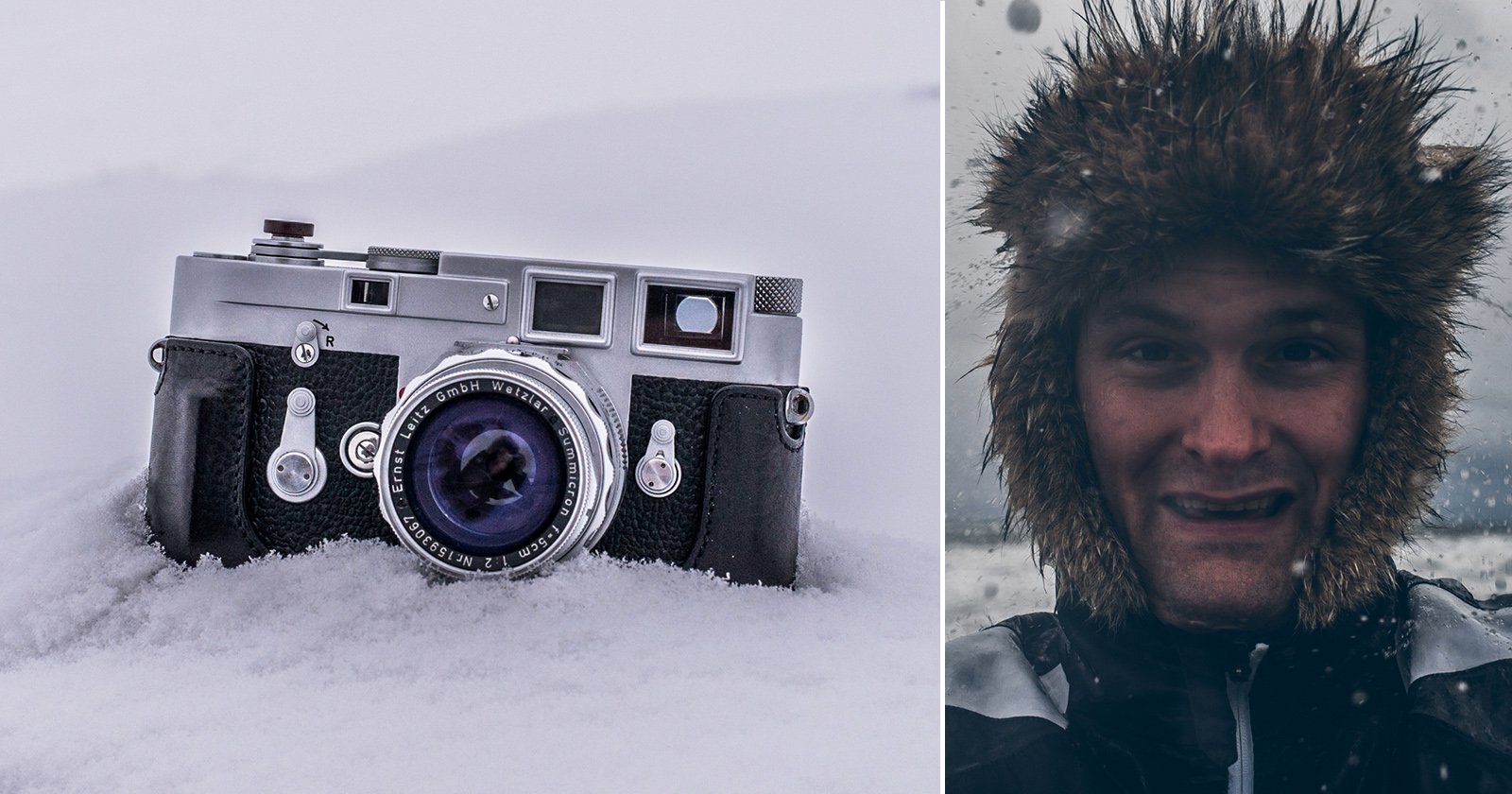 With the recent release of the Leica’s new M10, I noticed an interesting commonality amongst the reviews: almost all of them tested the camera in sunny, dry, or interior environments.

Now, I understand that Leica’s are expensive cameras and that reviewers and owners may not want to risk their equipment, but it strikes me that it might be worth knowing what kind of abuse these cameras can take given the high price they command.

Additionally, I’ve seen Leica cameras treated with a sort of reverence that often influences the types of shots photographers are willing to risk taking—and it strikes me this reverence may be preventing some from fully taking advantage of what the camera can offer.

If all you see coming out of Leica reviews are sunny shots in a neighborhood park, low light shots of a guitarist at a hip venue in Austin, or converted black and white street photography from an afternoon stroll around Florence, then you may come to think that’s what a Leica is for. For photography that is safe, secure, dry, or climate controlled.

So, I thought I’d write a slightly different review. A review of Leica that focuses on what can be accomplished in the extremes of hot, cold, wet, and wild.

Over the last year and a half, I have not hesitated to put my camera between me and any manner of weather in pursuit of the photos I want to capture. And I believe this is a key element missing in the narrative surrounding Leica M cameras.

Growing in your photography, and making great photographs requires risk. And if you’re worried your camera might get wet or frozen or over heated, you won’t risk, and won’t grow, and won’t come home with the images you could have if you’d pushed a litter further, or a little harder, or a little higher. So this is a short review about soaking, freezing, and overheating a Leica M.

First, this review isn’t in the least technical. Off the top of my head, I don’t know how many megapixels the camera has, or what its dynamic range is, or how many shots it can take a second. I would say to each of those the camera has proved sufficient. But really that’s not all that interesting. There’s a newer Leica out anyways that probably has more and takes more.

Second, in no way am I going to say that a Leica can do this better than some other brand or camera. This isn’t a comparison piece.

This write up has a simple aim, to show and tell that a Leica can do more than what you’ve seen in the reviews. That it can be your companion through thick and thin, and that when pushed, when challenged, when risked, it will make fantastic images.

The first weekend after receiving my Leica M-P I was hiking in Glencoe. Up at the top of Buachaille Etive Beag the clouds streaked over the trial, the wind whipped around us, and I tentatively withdrew my new camera from under my jacket where it was swiftly returned after a shot. But by the end of the day things had changed.

If I was going to use this camera, I had to use this camera. It couldn’t be cosseted away to be fearfully pulled out at only the most decisive moments. It had to be on my shoulder or wrapped around my wrist ready to go at a moment’s notice. And after that weekend it always was.

Anyone whose lived in Scotland can tell you that most dynamic thing about this ancient landscape is the weather—sun, rain, sleet, fog, wind, and sun again is all in a day’s work, and the Leica proved a game companion through it all.

From the heights of the Scottish Highlands to the heat of the California desert the Leica proved indomitable. Journeying out into the Mohave Desert, to route 66 and the Amboy Crater, the 40°C (104°F) heat was no obstacle for the camera. The same could not be said for its user.

Back in the rather more staid and incongruously lush surroundings of Palm Desert the M-P proved a worthy hiking companion as thunderstorms rolled over the western side of the valley.

In Scotland again, the Leica further proved its resilience, this time on a cold autumn evening when an unexpected display of the Northern Lights found me without a tripod. Desperate not to miss the display the camera was unceremoniously and firmly set on the wet West Sands of St Andrews, which stood in for a tripod admirably.

45 minutes later, wet and sandy, the camera had rendered some fantastic long exposures of what remains the best performance I’ve seen of the Aurora Borealis.

That Christmas saw a return to my original home in Canada, which provided ample opportunity for more winter wanderings. On the mountains of the West Coast, snowshoeing up above Squamish and the Sea to Sky the camera was tireless—its stunning battery again proving how robust it is.

As a brief technical aside, the battery on the Type 240 is spectacular. In all my time with the camera, and its one battery, I have never been caught out without a charge. I don’t know how many shots the battery can take, but I’ve never been left wanting. Typically, it gets charged once a week, twice when I’m shooting every day, and once I saw the charge level reach 15%.

Even in the striking and biting cold of a Calgary winter night the battery and camera were unfazed. After a night walk in the woods, trudging through snow up to our waists as bouncing circles of light from our head lamps lit the way with our hoods and jackets pulled tight to keep out the -20°C (-4°F) air, the camera had no qualms snapping away portraits of our shivering troop lit by a solitary light above the garage.

Without a recharge the next day saw us headed out to Banff, where again the temperature was around -20°C. Standing out in the cold waiting for the lights to change and for the right mix of pedestrians to cross my path it was me, not the camera that gave up first.

This past autumn the new Leica M-10 was released. It’s a beautiful camera and by all accounts it would appear an improvement on my M-P 240. But as the review began to mount, and praise was rendered, and platitudes were sung, I was struck by how un-challenged the camera had been by the reviewers. A part of me was grieved that many who would be purchasing this striking new tool would be too nervous to push its limits, or simply, based on what they had read and seen, assume that it was camera for sunny photography on colorful Cuban streets or the like.

My frustration with these conservative reviews peaked on a weekend when St. Andrews was beset by the confluence of a fantastic storm and unseasonably high tides. Donning all the waterproofs I could find, a study pair of wellies, and my Leica, I leaned into the howling wind and pushed my way out along the town pier. Water gushed over the concrete rampart that protects the town’s small fleet of tired lobster and crab boats.

Alone on the pier with no one in sight, it was me, the elements, and my Leica. It was horrid. It was fantastic. And I loved every minute of it.

My wellies were full and my waterproof jacket and trousers were rendered obsolete in minutes. There was water in my nose and eyes, down my back and between my toes, and my Leica was faring little better. Advertised as somewhat weather resistant with some sealing on key points of the body I had hope the camera would retain functionality. Between shots I guarded the camera against the waves that poured over the pier. Not always successfully.

Through it all, I was ecstatic. Cold, shivering, wet, and nearly deafened by the wind I was the only one out there. My Leica and I were the only one getting these shots.

And in the end, whatever anxiety I’d harbored for the camera was unfounded. Once home and stripped of my soggy apparel, the camera was gently washed with a wet cloth, dried with a towel, and left to air out.

There was no water inside. No water in the base plate. There were no problems at all. And whether the pictures merited the risk or not, it had done everything I had asked of it. And all of this in addition to the thousands of everyday shots it takes of safe, dry, warm things. I’m honestly not sure what else I could subject it too, but whatever it is, if it’s a breach I’m willing to jump into to, I know it’s coming with me.

It’s a camera. It does all the things a camera should do. Maybe it does some of those things better, maybe not. I’m not trying to sell anyone on it. I’d just like the perspective of what it’s capable of to shift.

There are lots of great reviews of all the M-P’s strengths and weaknesses and suggestions of who it’s for or not for. All I want to contribute to the conversation is a degree of demystification around what and who a Leica is for. I want Leica reviewers and users to be less worried about babying their camera’s and more concerned with the capturing the adventure of life.

Risk more, and take your camera with you. Get wet. Get cold. Get hot. Get blown around. Take pictures, and show us the world through your lens.

Honestly, I think the M-P 240 is a great camera. I love the images it produces, I love the lenses that go with it. I love the way it feels in my hand, and the way it gets out of the way when I’m making photos. I love its sturdiness. Mostly though, I love its simplicity. It’s the most wonderful feeling to be taking photos and to forget entirely that you are using a camera.

To see the world through the range finder of a Leica is simply to see the world. To press that shutter release and have the quiet affirmation that the world as you’ve seen it is stored and recorded for others for posterity, is why I love photography.

Canon Will Release an 85mm f/1.4L Lens this Summer: Report