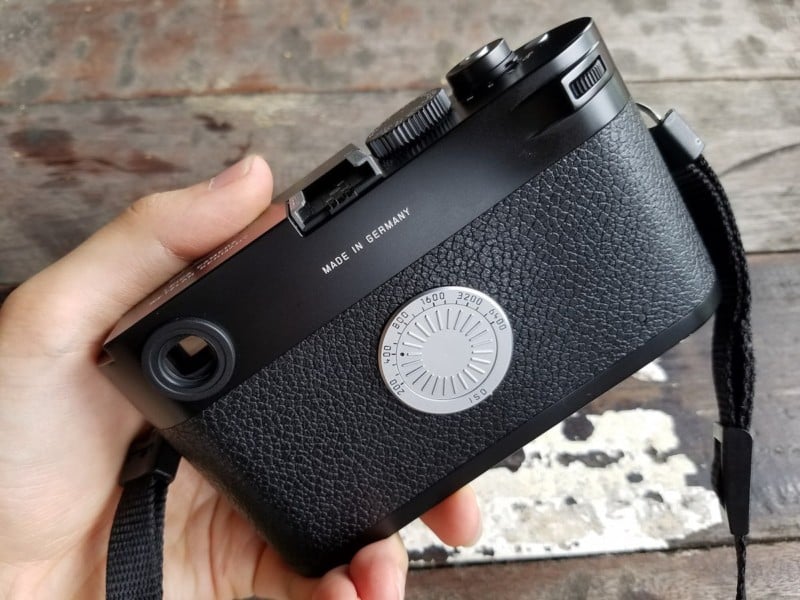 The Leica M-D (the digital rangefinder with no LCD screen)—all hype, or the real deal?

My dream for the perfect digital camera was this: a digital camera that emulated a film camera. Where you didn’t have complicated menus, settings, or an LCD screen to distract you.

A while back, Leica introduced their limited-edition Leica M60 (a very expensive digital Leica with no LCD screen). It was a collector’s item, and very cool. But not for the mass-market, and certainly a camera I couldn’t afford.

In the end, I tested one out, thought the concept was fantastic, and gave a golf-clap to Leica for having the balls to make such an avant-garde camera. 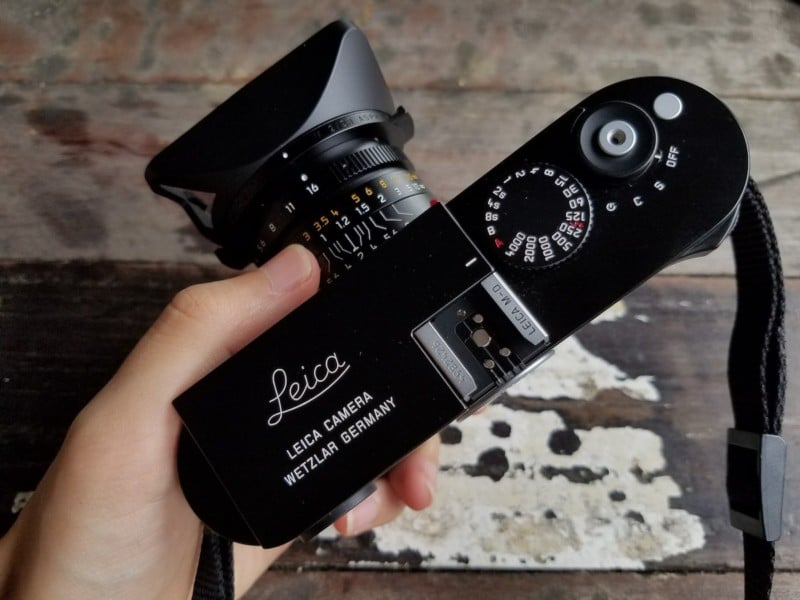 When the Leica M-D got announced, I was amazed. I thought it was one of the coolest cameras that Leica has ever made.

It was essentially my dream camera: it has the sensor of the Leica M240, but no LCD screen. Only an ISO dial in the back, like a film Leica MP camera.

The design was sublime. Very much like Apple and the philosophy of Steve Jobs, the camera is the ultimate essence of what is necessary in photography. You have the lens, manual focus, and the aperture-ring. You can change the shutter-speed on top, and change the ISO in the back. You have the viewfinder. And you have the shutter. 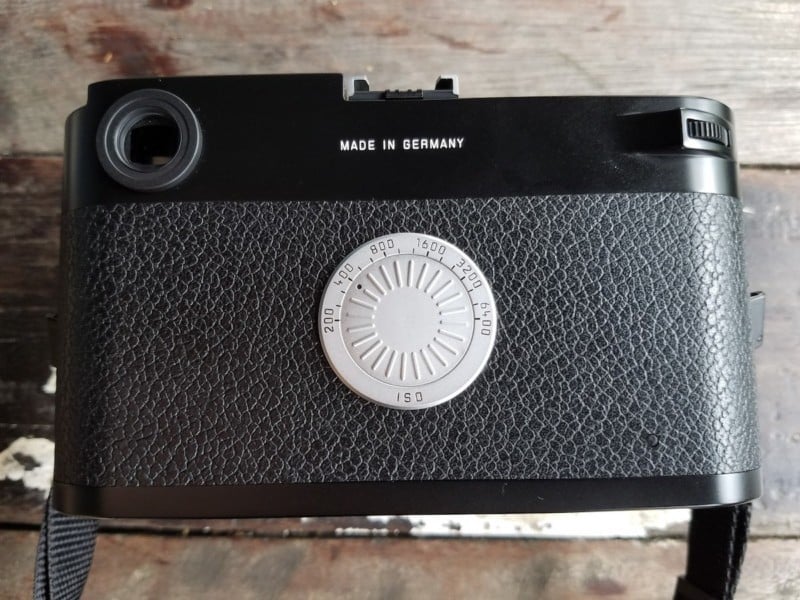 By having the ISO dial in the back where the LCD screen would normally be, the camera just flows. The lines on the back of the camera sit mostly flush. Now, whenever I look at a digital Leica with an LCD screen on the back, it looks quite ugly and out-of-place.

The new Leica M-D does have some (more) features than it really “needs” to have. In the bottom-right back of the camera there is a tiny little red LED that blinks when you’ve taken a photo, and the files are writing to your SD card. What used to be the video dial for the M240 (a little silver button on top of the camera) is used to check your battery and how many photos you have left (which can be viewed through the viewfinder, in little red LED numbers).

Also where your thumb rests in the back, there is a little dial that turns left and right, which can be used to change exposure-compensation (as the Leica M-D has aperture-priority). 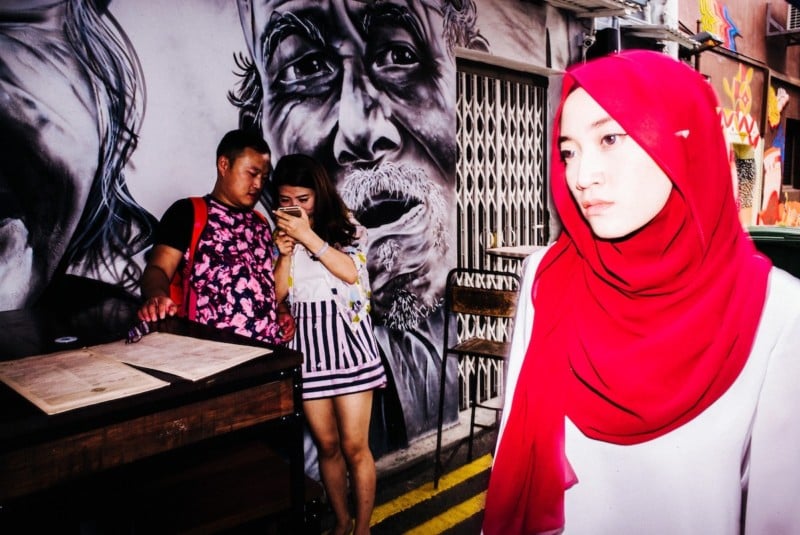 I was recently in Singapore for a workshop, which was generously sponsored by Leica. I asked to borrow the M-D for the weekend and wondered to myself, “How will the experience of shooting with the Leica M-D compare to shooting with a film camera?”

After all, I feel that street photography is most enjoyable when you are in the zone and not distracted by the LCD screen. With most digital cameras, I get distracted by “chimping” (checking your LCD screen after taking a photograph). When I’m out shooting, I want to focus on shooting—not looking at the photos that I’ve already shot. I should be thinking about the next photo.

Why did I use these settings? Because it essentially turns the camera into a glorified point-and-shoot camera. I don’t like to think when I’m shooting street photography. I like to “set it and forget it” in terms of technical settings. I prefer to react to what I see interesting, and just click. 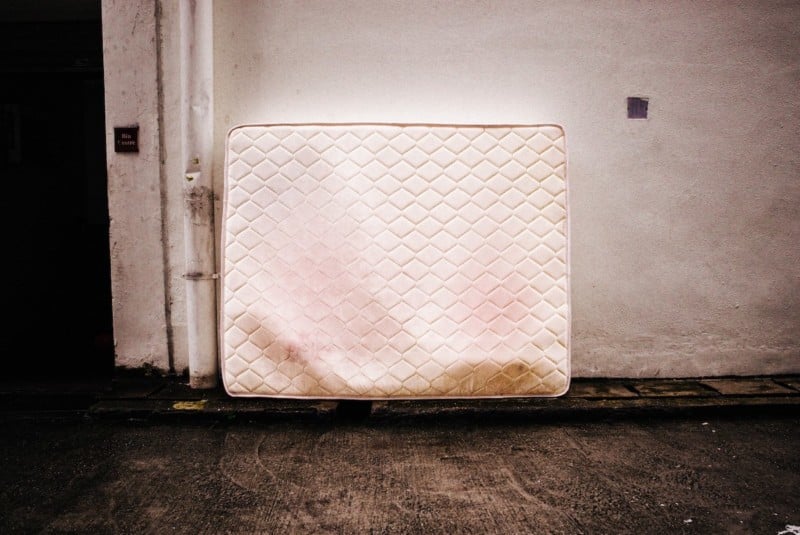 I felt the same zen I did when shooting with my film Leica MP. The zen of not worrying about the photo you just shot; rather, thinking about the next photo you’re going to shoot.

I also felt it pretty liberating to shoot in aperture-priority mode with everything in fully-auto. I shot some urban landscapes (with the flash off) and didn’t think whether the photo would be ‘good’ or not—I just photographed what I felt was interesting.

Which made me realize—not having an LCD screen helped me enjoy the process of shooting more. Worrying less about the final-outcome. It helped me enjoy my walk on the streets more, and have less pressure whether I would have a good photo at the end of the day. 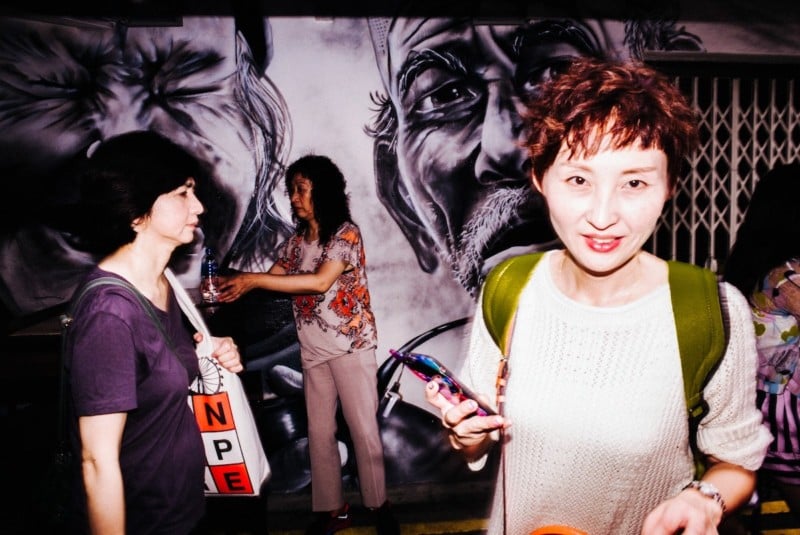 In terms of performance, the M-D was fantastic. Because there is no LCD screen, the battery lasted all day with no problems. The camera is quick, and didn’t have any issues with buffer. I could keep clicking photos, without having the camera freeze or lock up. 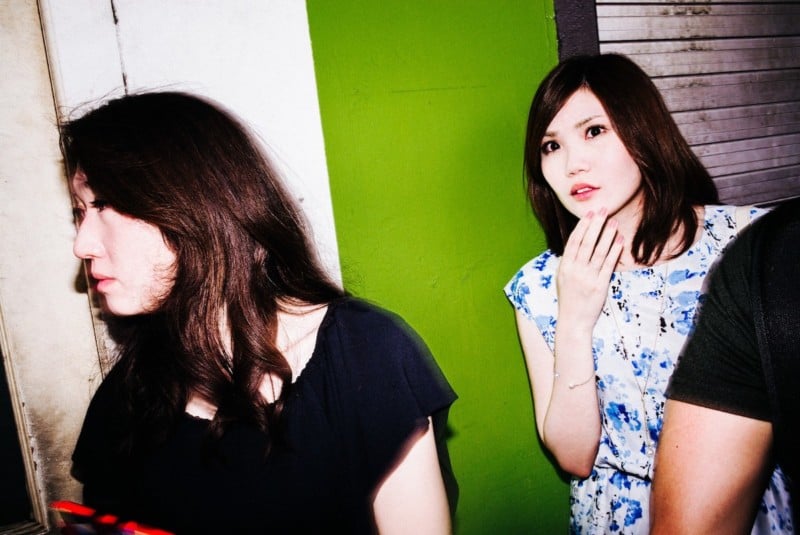 The thing I was most impressed with is the look of the photos. I have heard a lot of photographers say they don’t like the colors of the new M240 files (CMOS sensor instead of a CCD sensor, which was in the older Leica M8/M9). I think they just don’t use the right presets.

I used one of my color film-simulation presets, and I loved the gritty, colorful look of the images: nicely saturated, and actually really looked like film. The photos were nice and sharp, and the flash added an edgy look to my images.

Honestly, after seeing the photos on the M-D (once again the sensor is the same as the modern Leica M240 and Typ 262) I don’t feel the need to shoot color film anymore. With the sensor, and the color preset, I achieved a ‘look’ that I was satisfied with.

Carrying it around all day 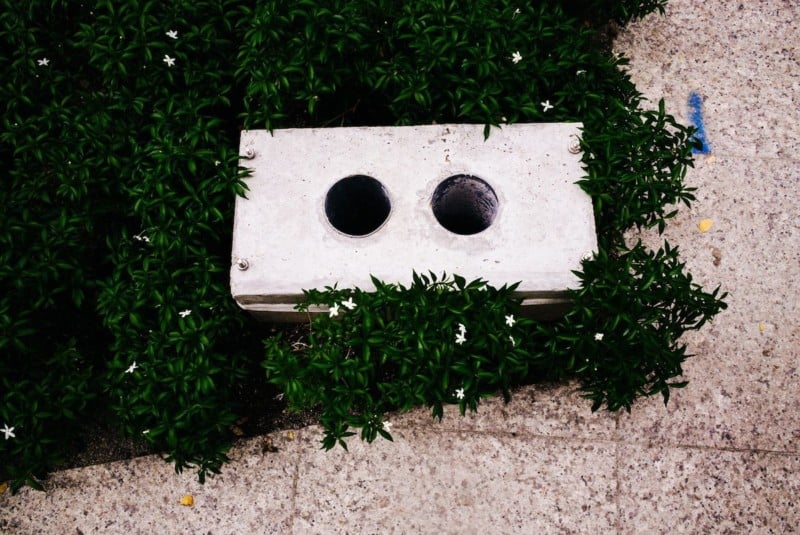 After shooting with my compact Ricoh GR for a while, the weight and bulk of the Leica M surprised me. I had the default neck strap on the Leica M-D, but didn’t let it sit on my neck. When it did, it hurt my neck like crazy (with the lens, and the flash, it was really heavy). Rather, I carried it around in my hand. A wrist-strap would have been better with the Leica M-D setup.

In my personal life, I’m trying to optimize for weight. I’m trying to make everything “ultralight”. This is why I prefer the compact Ricoh GR—super light, compact, and less weight and fatigue.

Walking around with the M-D for the entire day was tiring compared to the Ricoh GR. But the benefit of having the M-D was that it was a lot faster to shoot with, as the Ricoh GR has some lag when shooting. There is nothing faster than shooting with a rangefinder, especially when shooting at f/16, with a wide-angle lens, and a flash. You just point and shoot.

Will I buy the Leica M-D? 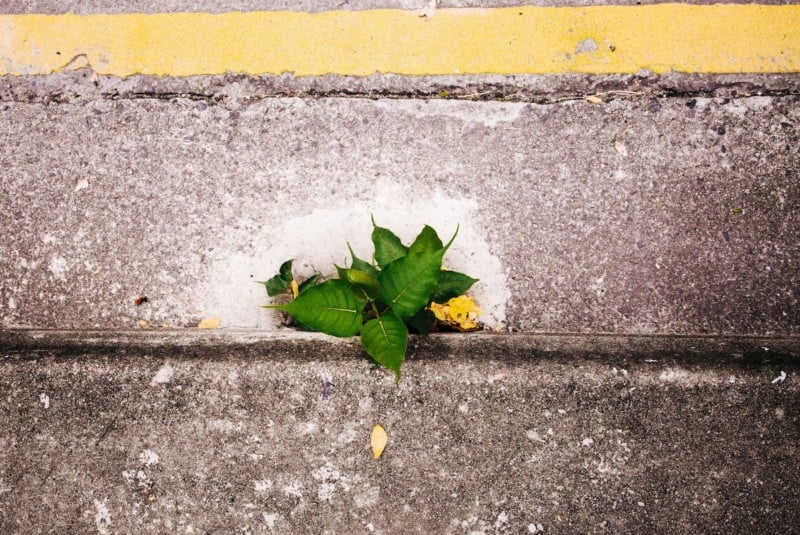 I don’t think so. I already have a film Leica MP at home, which I will probably keep shooting with. Or who knows, I might sell the Leica MP, and maybe one day get the M-D. I have no idea.

I guess I am happy at this point in my life—now that I no longer have the lusting G.A.S. (gear acquisition syndrome) that I had in the past. I like the feeling of using a camera, appreciating it, but not feeling like I “need” or “want” it.

Honestly, I’m very satisfied with the images I’m getting from my Ricoh GR II, and I prefer the lighter weight (and of course, much lower price). I don’t know if I want to re-introduce the heaviness and the size of another Leica in my life.

Even now, my backpack is pretty heavy. I usually lug around my 13″ MacBook Pro, and carry Cindy’s laptop (13″ MacBook air). I already have shoulder pains. If I had any camera heavier than the Ricoh, my life would be worse-off. 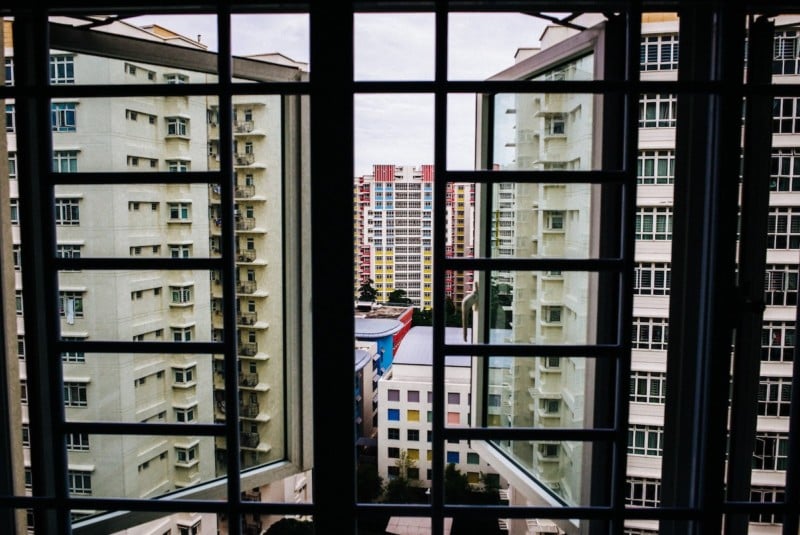 I have to say, the Leica M-D is the real deal. It is an amazing camera made by Leica, and once again, I congratulate the design team and product team at Leica for making such a badass camera.

It takes a lot of guts to make a LCD-screen less camera in today’s digital world. But this is where true innovation comes from—taking away superfluous or distracting functions in a device and focusing on the pure essence of the experience. Kind of how Steve Jobs tried to figure out how to remove superfluous buttons, functions, and features on the iPhone to make it the revolutionary device it has become.

The Leica M-D is very expensive, and most of us (normal human beings) cannot afford one. So if it is outside of your budget, pretend like it doesn’t exist. Just buy a film camera. And if you want a Leica, buy a second-hand Leica M4 or Leica M6 (if you want to have a meter). The shooting process of a film camera is identical to the M-D.

But if you have the money (to buy this camera in cash, not on your credit card) I would highly recommend it. It is the coolest digital M out there at the moment, and the only one I would consider selling my left-kidney for.

Video Review of the Leica M-D

About the author: Eric Kim is an international street photographer who’s currently based out of Berkeley, California. The opinions expressed in this article are solely those of the author. You can find more of his photography and writing on his website and blog. This post was also published here.

Yangon Myanmar is the New Cuba for Street Photography