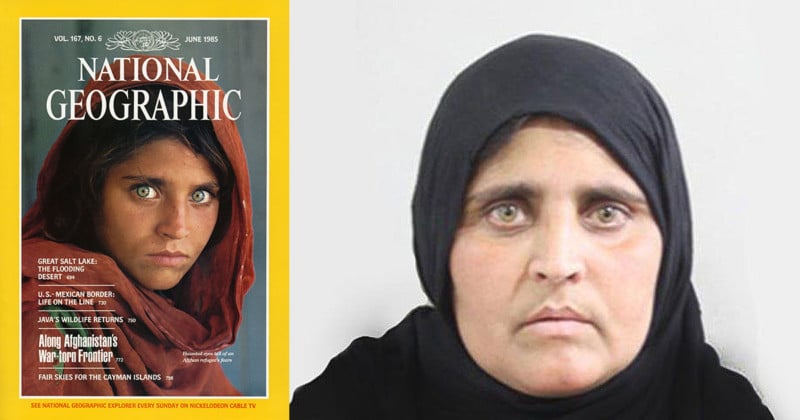 The woman known as “Afghan Girl” has been arrested in Pakistan for using a fake identity card and living in the country illegally.

46-year-old Sharbat Gulla (also known as Sharbat Bibi) became internationally famous as a young girl after being discovered by photographer Steve McCurry at a refugee camp back in 1984. His portrait of her graced the yellow-bordered cover of the magazine in June 1985 and became one of the most recognizable covers in the history of the magazine.

Dawn reports that Gulla, a citizen of Afghanistan, was arrested by Pakistan’s Federal Investigation Agency (FIA) today for using fake documents to obtain a Pakistani identification card under the name “Sharbat Bibi.” After arresting Gulla, FIA authorities shot a portrait of her as an official mugshot.

Investigators are also looking at government officials and their role in issuing identity cards to foreigners without proper papers.

Update on 10/27/16: Photographer Steve McCurry says that he will do everything possible to help Gulla, saying that “her arrest is an egregious violation of her human rights.”

Two hours ago, I got word from a friend in Peshawar, Pakistan, that Sharbat Gula has been arrested. We are doing everything we can to get the facts by contacting our colleagues and friends in the area. I am committed to doing anything and everything possible to provide legal and financial support for her and her family. I object to this action by the authorities in the strongest possible terms. She has suffered throughout her entire life, and her arrest is an egregious violation of her human rights. – Steve McCurry

Update on 11/9/16: Gulla has been deported from Pakistan and welcomed back into Afghanistan with open arms. President Ashraf Ghani welcomed her back “into the bosom of her motherland” and promised to provide her with a furnished apartment so she can live “with dignity and security in her homeland.” Read the full story here.

8 Tips for Leaving a Light Footprint as a Travel Photographer