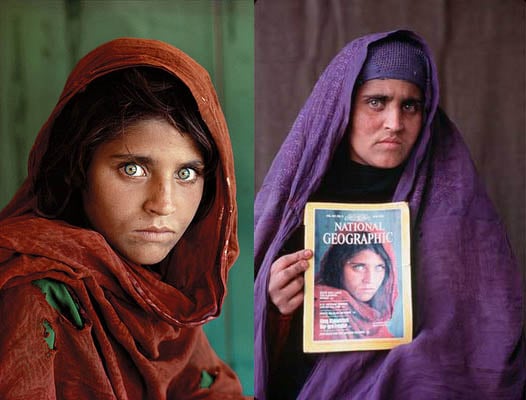 In 1984, photographer Steve McCurry shot a portrait titled “Afghan Girl” that would become the defining image of his career and one of the most famous National Geographic covers ever published. In 2002, McCurry was able to locate the subject, Sharbat Gula, and learn her story.


National Geographic published a fascinating piece telling the story of the photo, the search, and the subject:

The reunion between the woman with green eyes and the photographer was quiet. On the subject of married women, cultural tradition is strict. She must not look—and certainly must not smile—at a man who is not her husband. She did not smile at McCurry. Her expression, he said, was flat. She cannot understand how her picture has touched so many. She does not know the power of those eyes.

Some interesting facts: McCurry shot the photo on Kodachrome using a Nikon FM2 and Nikkor 105mm f/2.5. Gula’s identity was confirmed by comparing her iris to the Afghan Girl’s. Although she had never seen her famous portrait, Gula distinctly remembers sitting for the photo — it was one of the only times in her life that she had a photo taken of her.