Places like Paris are prime candidates for capturing incredible aerial footage, but where most people would go about this task with a drone (or maybe a replica of the Up! house…) the people at the non-profit FREEDOM took a different approach.

They strapped a Sony Action Cam Mini to the back of a white-tailed eagle named Victor, and let him fly from the observation deck of the Eiffel Tower.

The resulting video shows the eagle taking flight, and then gliding down towards the ground whilst taking in the view. At the end, it makes a quick turn and, just as you see the Eiffel Tower come back into the frame, it breaks into a 111mph dive to reach its handler. 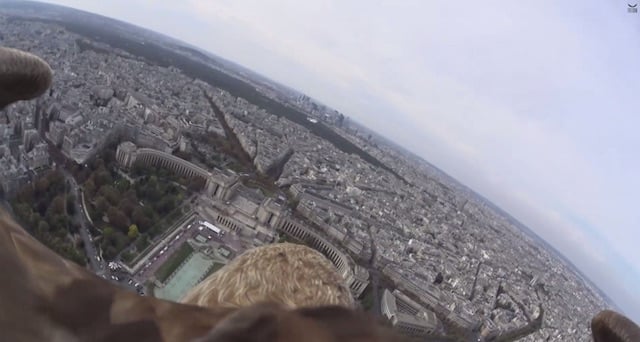 It’s worth noting that this wasn’t just a cool stunt for the sake of coolness, FREEDOM’s mission is to re-introduce the white-tailed Eagle to the French and Swiss Alps. According to the Daily Mail, the species has been extinct from France for over 50 years, and this flight was set up to draw attention to FREEDOM’s plan.

To that end, if you’d like to learn more about FREEDOM or help support their cause, you can do so by clicking this link.