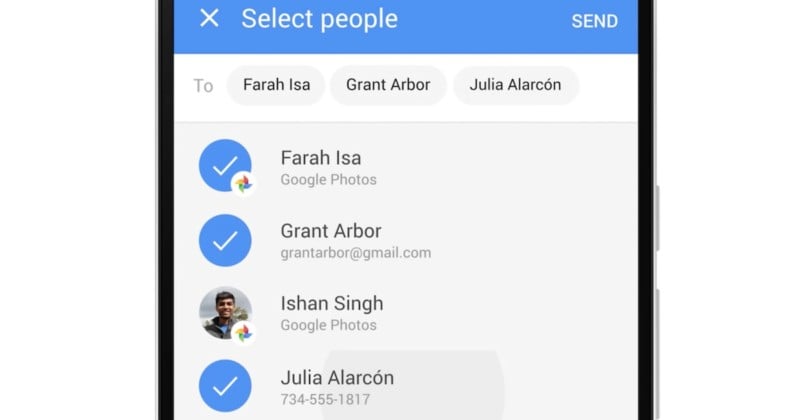 The Google Photos app just keeps getting better. First, the app made made backing up your iPhone’s photos a breeze. Then it started turning Live Photos into stabilized GIFs. And now, now it can create themed slideshows a la Facebook, and make sharing your photos easier than ever.

Both features—officially dubbed ‘movie concepts’ and ‘faster sharing’—were introduced at once. The first takes a page out of Facebook’s playbook, turning photos of life events into themed “movies” complete with music.

It’ll dig through recent and not-so-recent photos and, for example, turn those photos of your kid growing up into this movie:

Movie “concepts” are just that, they’re built around specific types of photos and Google will be releasing them over time. In addition to this “growing up” concept, Google will soon release a summer concept for reliving some of your favorite sunny memories, and another for formal events like weddings. Of course, you don’t need to know any of that, because the app does all of this automatically. You just keep on living your life.

The second major feature release is a faster, simpler sharing workflow that replaces the “how” with “who.” So instead of choosing to share a photo (or photos) to Facebook or Instagram, you’re shown a list of contacts instead. Pick the photos, pick the people you want to share them with, and go.

If your recipients have a Google Photos account, they get a notification. If they don’t, you can have them receive either an email or SMS message with a link to view the shots. Here’s a quick look at how that will work:

Both updates are already live for Google Photos users on iOS, Android, and Web. Just update your app or download it from the appropriate store, and “let Google take care of the rest,” as they say.

This Homebrew High Speed Camera is Headed to Kickstarter Soon