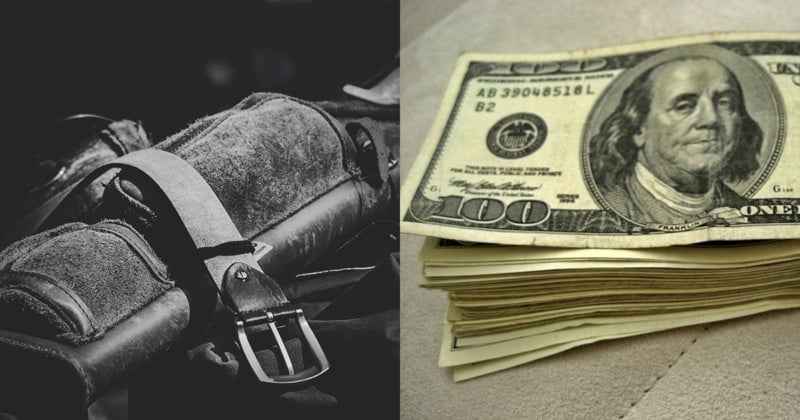 What’s the best deal you’ve ever gotten in a photo gear trade? Whatever it is, it’s probably not better than British photographer John Swannell‘s best trade. He managed to turn a cheap thrift store camera bag into about $42,000.

Swannell shares the story in a recent interview he did with Canon Professional Services. He originally purchased a camera bag from a London thrift store “for a couple of quid” — about a few dollars — after seeing it and loving how many pockets it had.

Some time later, Swannell spent four days with legendary German-Australian photographer Helmut Newton in the south of France. During their time together, Newton took notice of Swannell’s camera bag and decided that he wanted it.

“Helmut wanted it and wouldn’t take no for an answer,” Swannell says. “He kept on offering me money for it during the shoot and went up to $500 and still I wouldn’t sell it to him.”

Turning $3 into $500 would have already been an impressive return on investment, but Swannell liked his camera bag enough to turn down the crazy offer.

Helmut, grumpy from his failing negotiations, decided to make a final attempt at acquiring the bag on the photographers’ last day together as they walked across an airport tarmac to board their airplane.

“He turned round to me and said ‘there must be something of mine you want, I have to have that bag!” Swannell recounts. It was at that time that an idea popped into Swannell’s head, and he finally made Helmut a counteroffer.

“OK, sign me a print from the cover of your book White Women and you can have it,” Swannell told the desperate photographer.

Swannell stood his ground. All of a sudden, Helmut grabbed Swannell’s bag from him, emptied the contents onto the tarmac, and marched away with it.

A few days later, the signed print arrived in the mail for Swannell. 10 years later, he sold that single signed print for £32,000 (the equivalent of about $42,000 at today’s exchange rate).

“So that old bag wasn’t a bad investment,” Swannell says.

(via Canon Professional Network via The-Digital-Picture)

The Fame-Seeking Models Who Pose for IKEA Photo Shoots