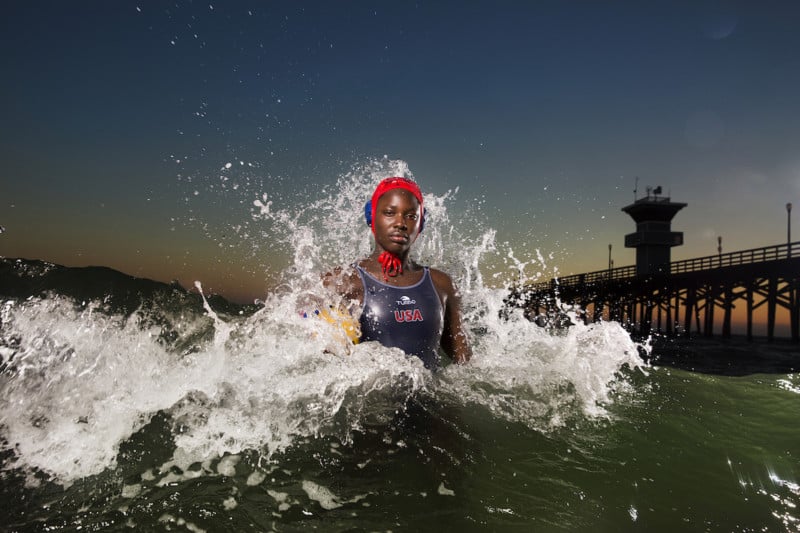 ESPN W recently hired editorial and commercial photographer Gina LeVay (@ginalevay) to capture environmental portraits of first-time Olympians. The assignment took Levay to six countries around the world over a two month period, and resulted in a stunning set of images.

LeVay has shot for a wide range of clients including Vanity Fair, TIME, People and for commercial clients like Sennheiser, Vespa, Superga Italia, and more. Her 9-year project on the New York Sandhogs—the workers building subway tunnels under New York City—resulted in a stunning book published by Powerhouse. Her work on the New York waterfront will appear in Smithsonian magazine in a few months.

I was shocked to see a single photographer assigned to a multi-country shoot in this day and age. I know you’ve worked with ESPN before, but how did this project come about?

I’ve worked with ESPN in the past on projects involving strong female athletes. We were talking about what collaborations we might work on next and came up with this idea of photographing first-time female Olympians. The idea was to create powerful portraits of these athletes in an iconic, signature location in their home country, where the landscape itself would appear as their training ground.

You’ve done natural light and lit portraits in the past. How did you settle upon the approach?

For this shoot, I wanted to use both natural and strobe light. The ambient light was definitely important because we wanted to make an environmental portrait. But the strobe was important to separate the women from their environment. So the combination was crucial in getting that dynamic impact in the photos. I also wanted to figure out a lighting concept that we could easily recreate in multiple locations to have a consistent aesthetic as much as possible. 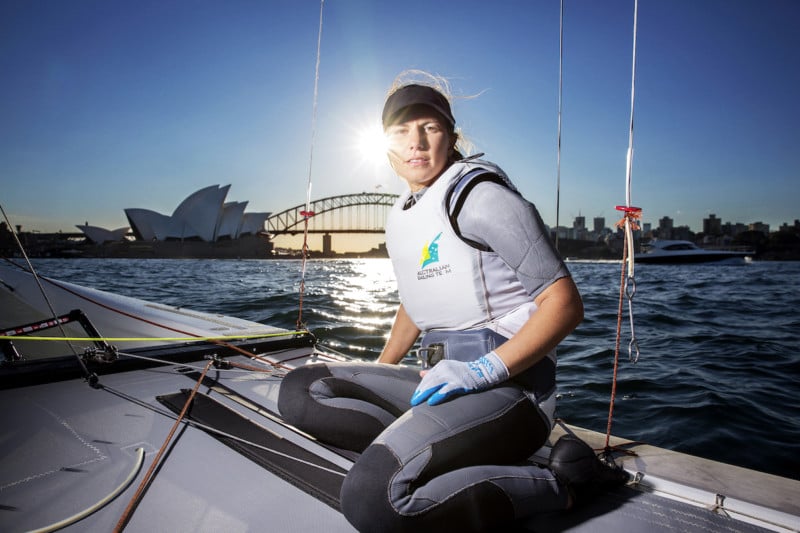 What was most challenging about working in so many locations?

Each location had its own challenges—the time of day, the amount of time we had at a certain location, and the athlete’s schedule. It was difficult working with restrictions at a given location and dealing with the natural elements we had no control over. And then we had to try to implement our lighting set-up in these conditions, so the images would have a cohesive feel as a body of work.

The shot of [water polo player] Ashleigh Johnson in the Pacific Ocean was tough because we wanted to light her in the ocean. Strobes and salt water don’t go well together. In the end, we had to sacrifice one of the lights to the ocean, not without heroic effort.

For other shoots, it was trying to create a dramatic scene in the streets of Bangalore—which is of course hectic and crowded—or figuring out how to rig and strobe the Nacra-17 catamaran used by the Australian sailor and also realizing the limitations of what you can control while directing a sailboat in the seas, ha!

Did you have assistants in each location?

I collaborated with Jeff Kavanaugh or Greg Hearling, accomplished photographers in their own right, for each shoot. I would then hire local 2nd assistants or fixers if we needed it.

Do you diagram your shots, or do you just mentally set up the shot in your head?

I do things mentally. I don’t do diagrams. I’ll mentally conceive of an image and then have a discussion with my assistant. If we can do a location scout day, we set up and test then.

Were you responsible for video? If so, what has been the most challenging part of developing those skills?

I started doing more video when I was working with my Other War project and commercially with CBGB and their music festivals. Then gradually when I would get an assignment, if I could work in a video element, I’d pitch it, and in many cases clients might want both from the start.

I think the challenge of working with both video and photo on a same project is to switch hats from video to photo, as they are different. You have to stop thinking about stills and think about how to tell a story with moving images and to think about different components that go into it: audio, multiple camera shots, etc. 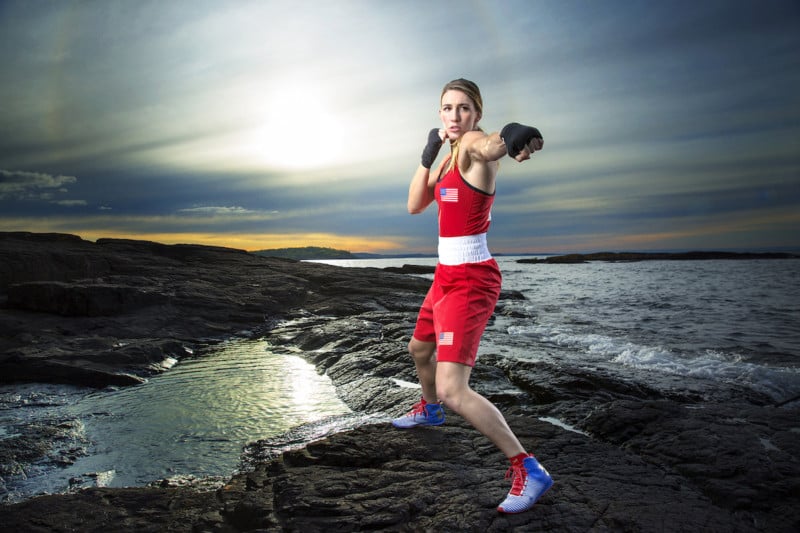 There has been controversy in the past about male photographers shooting editorial pieces on women. What are your thoughts on this issue?

I think anyone can photograph anyone, and I think the diversity of points of view and aesthetics is what makes photography interesting and creates a lively dialogue about the essence of our medium.

There’s something to be said—if I’m photographing women and I’m a woman, I think there’s a point of access that might be more immediately available than it would be to a man, but whether or not that makes a stronger portrait or not, who’s to say?

I shot sandhogs for nine years, and they were manly men. Maybe I saw sides of them they might not show to another man? Or maybe not. But either way that’s an opportunity that shouldn’t be denied to me just because I’m a woman. 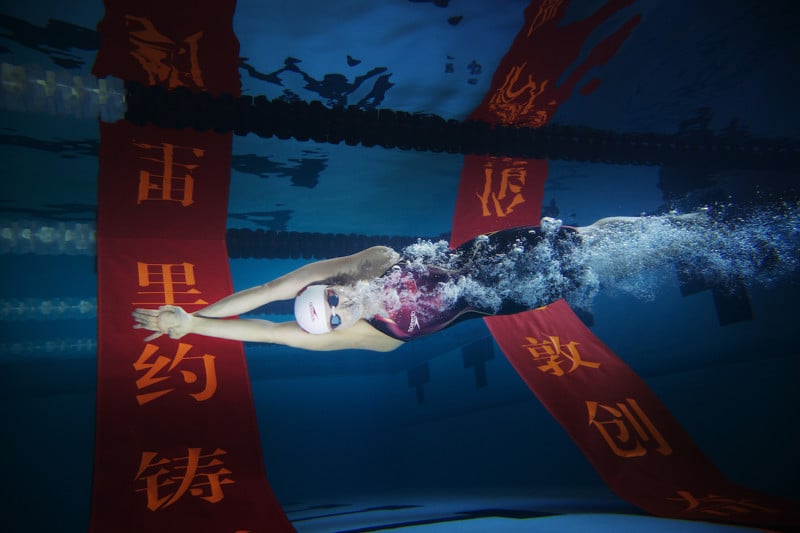 I’m a sucker for underwater shots, so I really love the image of Shi Jinglin. Do you have a favorite image from the series?

There are elements in each photo that were so new to me and there were challenges. So there are aspects of each image that I have an emotional attachment to.

The water polo shot was probably the most intense with regard to shooting conditions b/c the surf was really high. We felt very extreme.

At the same time, I loved being back in India. I lived in India, i worked in India, so being back in the Bangalore streets was amazing too. And shooting and lighting at Stonehenge was just wonderfully surreal. 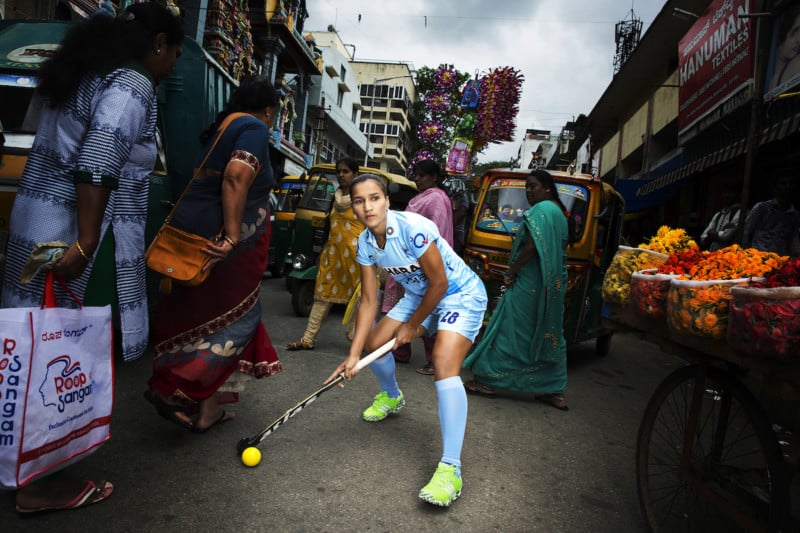 Tell me more about that arduous water polo image.

We didn’t have control over when we could shoot because it was a matter of when Ashleigh was free after practice. We got a permit for Seal Beach that day, and obviously didn’t have control over the weather. We scouted the night before, and it didn’t seem that crazy. But the day we shot, it was rough. We had two lights on light poles. I had a waterhousing on my camera. My two assistants were holding the lights really high and we had a lifeguard telling us when to clear out because a big set was about to come in.

There were a couple times when I just fell—there were powerful waves. Ashleigh was great because she would just stay in the water and dive under the waves. But we wanted to get the shot when the wave was in frame. So we’d have to brace ourselves, and sometimes we’d find ourselves on the ocean floor.

Jeff was actually behind Ashleigh for the backlight, so he was the farthest out. And there was one huge wave that took us all out, but when Jeff went under he managed to hold the light above the water almost until it got to shore, while he was still under. You just saw the light, it was amazing. The lifeguard came over to try to help me, but I was like “Don’t worry about me, I have a camera housing. Save the light!”

What type of gear did you use?

The B1s were amazing to travel with. The light accessories were so collapsable. I’m used to heavier portable strobe options with so much more weight and equipment to deal with. This solution was great and we had no hassles with customs or anything.

Author’s note: This interview has been edited and condensed.

A Classic Photo Book Transformed Into an Adult Coloring Book