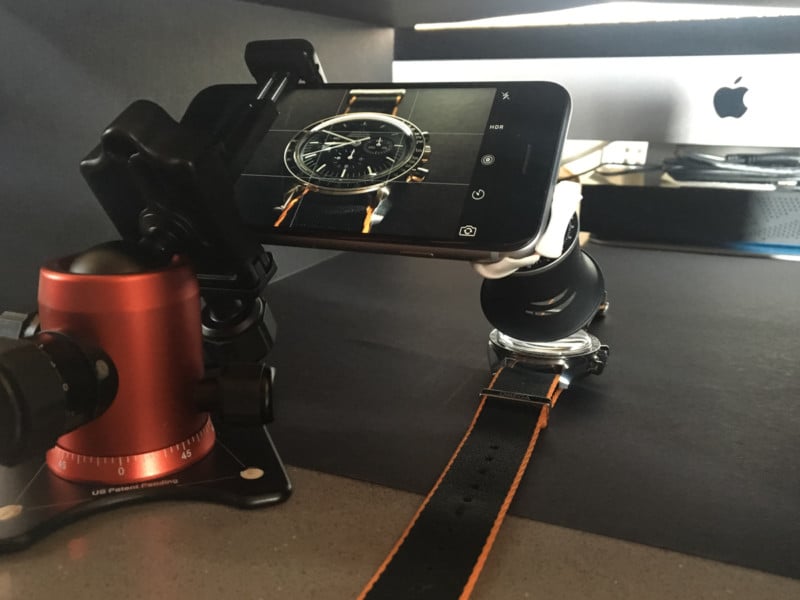 “It’s not the camera, it’s the photographer.” We (and probably you) hear this particular phrase ad nauseam, but once in a while we run across a set of photos that say the same thing without having to utter a word. These gorgeous watch photos definitely qualify.

The photo shoot came about after Ulivieri ponied up for an Omega Speedmaster, the watch of his dreams.

“Quite a while back I was visiting the Adler Planetarium and noticed a watch on display. It was the Omega Speedmaster worn by Jim Lovell on his Gemini XII mission,” he tells PetaPixel. “I thought it was such a cool artifact. The Moonwatch—as it’s affectionately called—was the only chronograph that survived NASA’s stringent testing procedures and the only timepiece NASA certified for manned space flight.” 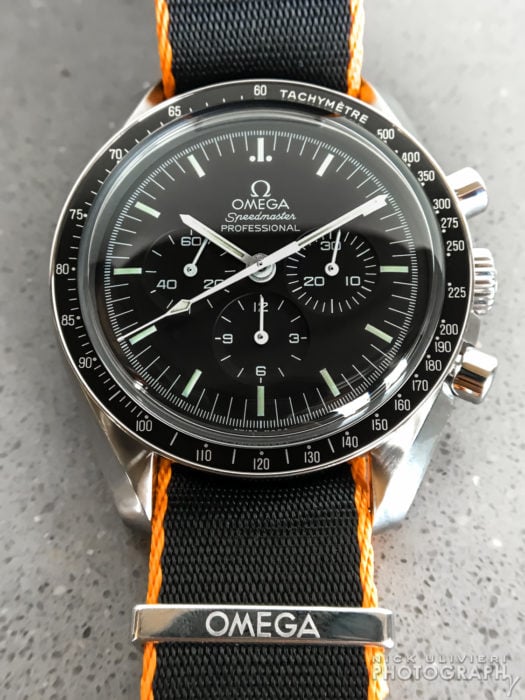 It was a watch Ulivieri thought about for many years until, finally, he got one. So what’s a professional photographer to do when he finally gets something he’s been wanting for years? He set about photographing it of course!

Ulivieri grabbed his iPhone 6s, sticky-puttied the jeweler’s loupe from the Speedmaster box onto the phone, and set up an impromptu product shoot.

“The shoot started out as a test, really,” he explains. “The Speedmaster comes in this really elaborate case and one of the included tools is a jeweler’s loupe. While examining the watch through the loupe, I thought to put it in front of my iPhone camera.”

The setup was simple: the loupe was poster puttied onto the iPhone, and the iPhone mounted atop a recently purchased Platypod. 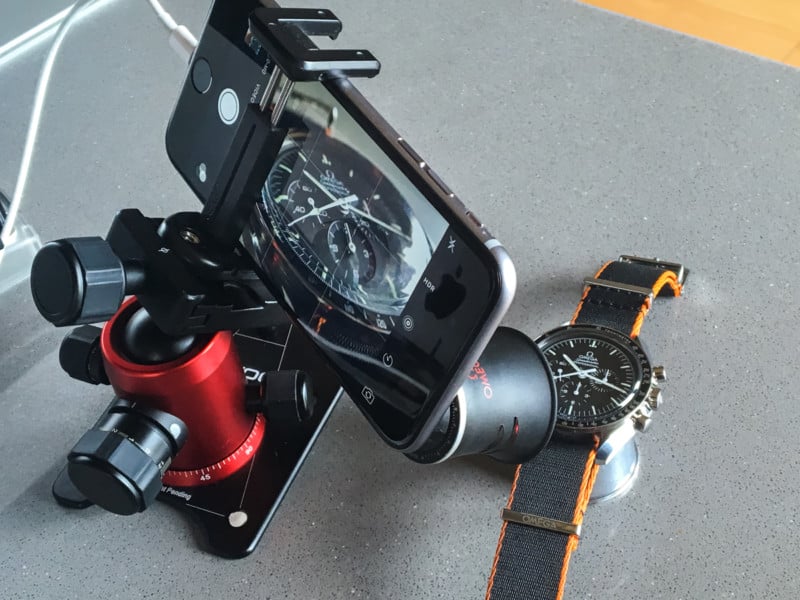 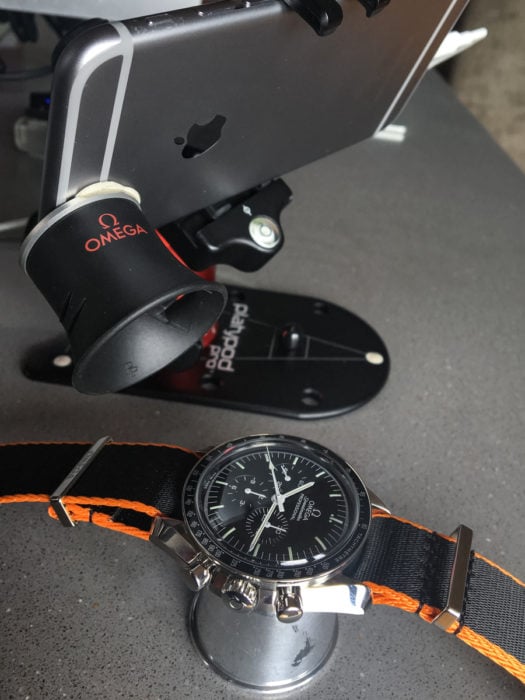 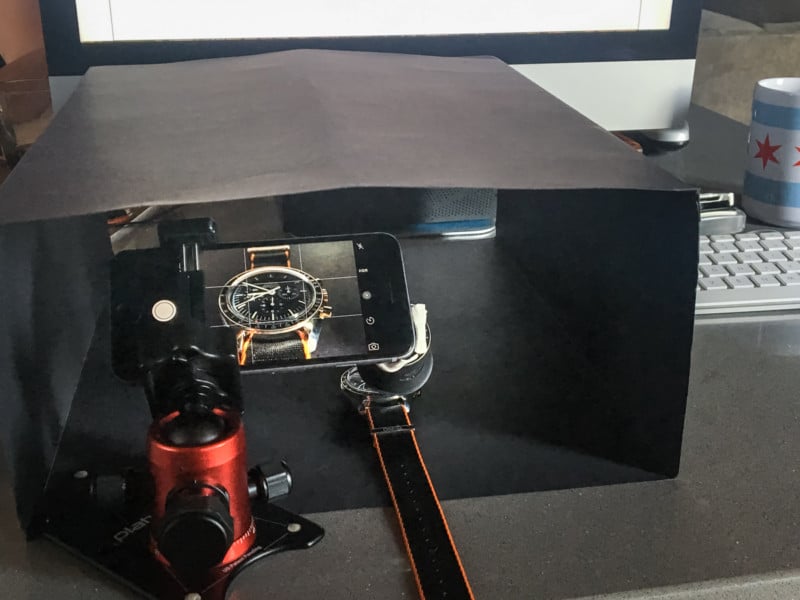 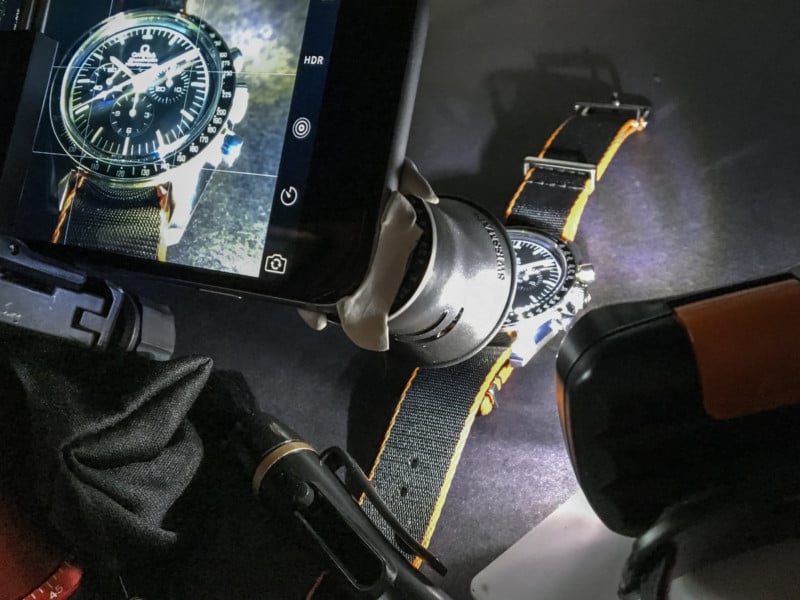 Using his computer and the windows for light, he set about capturing some macro photos. Then, for some variety, he took the black cardboard sleeve that housed the watch’s case and used it as a “dark cubby.”

“The open front allowed me to shoot into it,” says Nick. “While the open back allowed just enough of my computer screen’s light to leak in and add nice highlight to the domed crystal.” Here are the final shots. Pretty impressive for a homebrew setup using an iPhone, a jewler’s loupe that came with the watch, and some card stock: 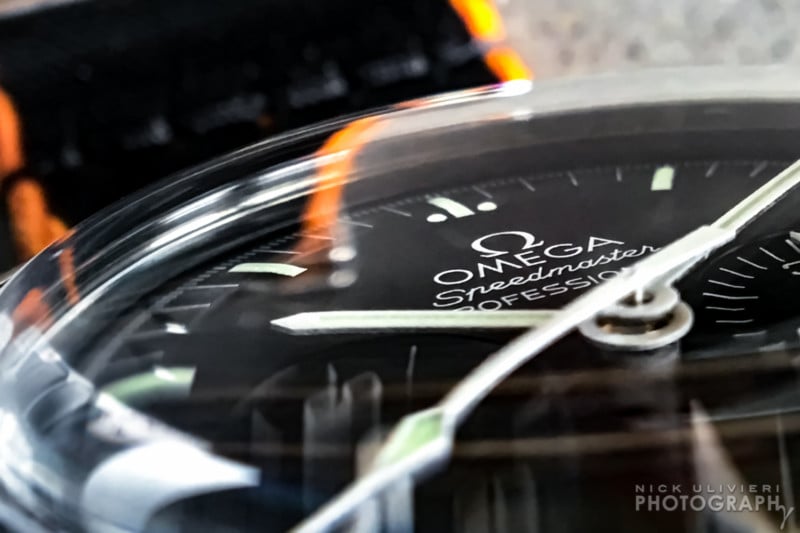 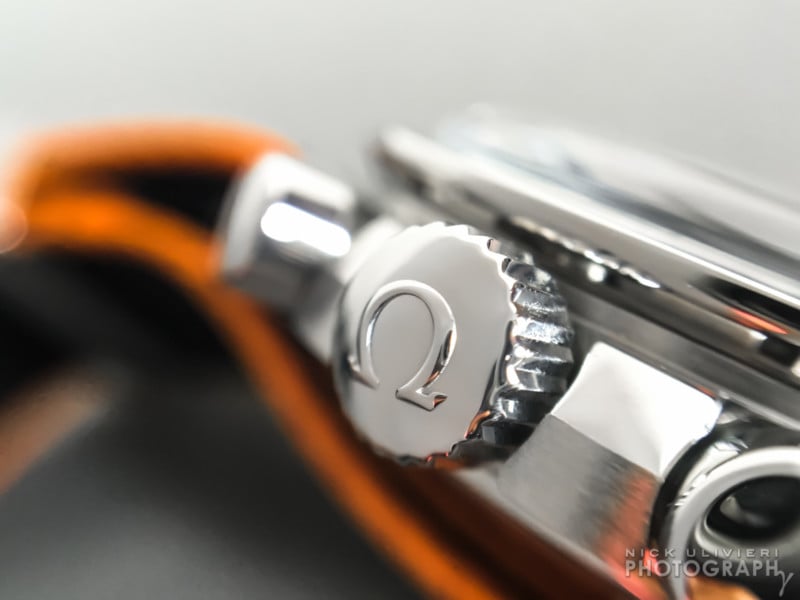 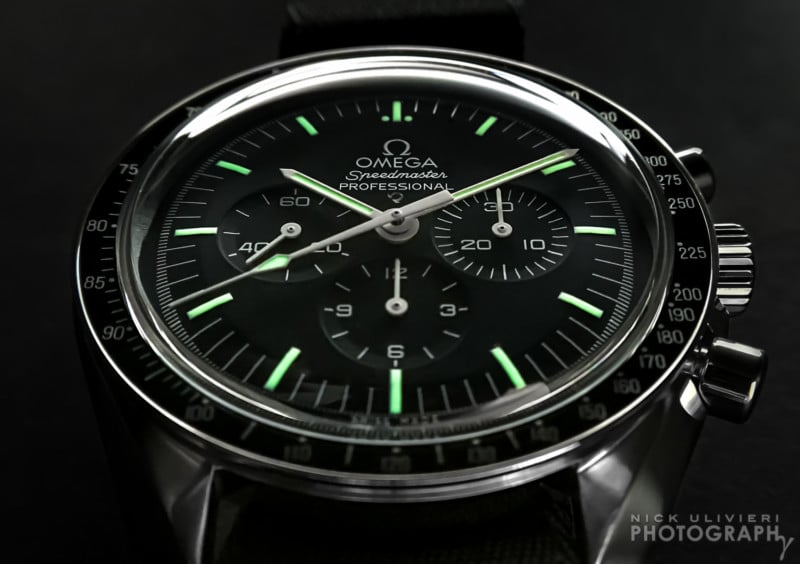 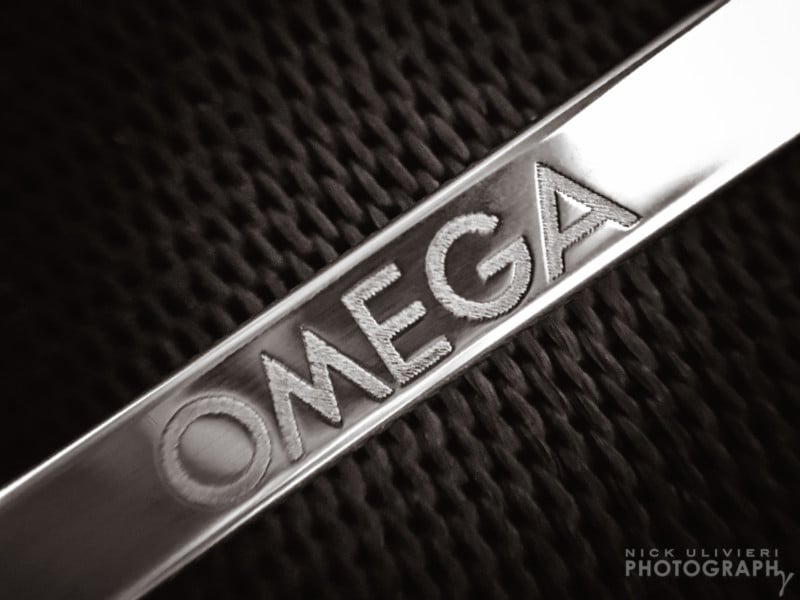 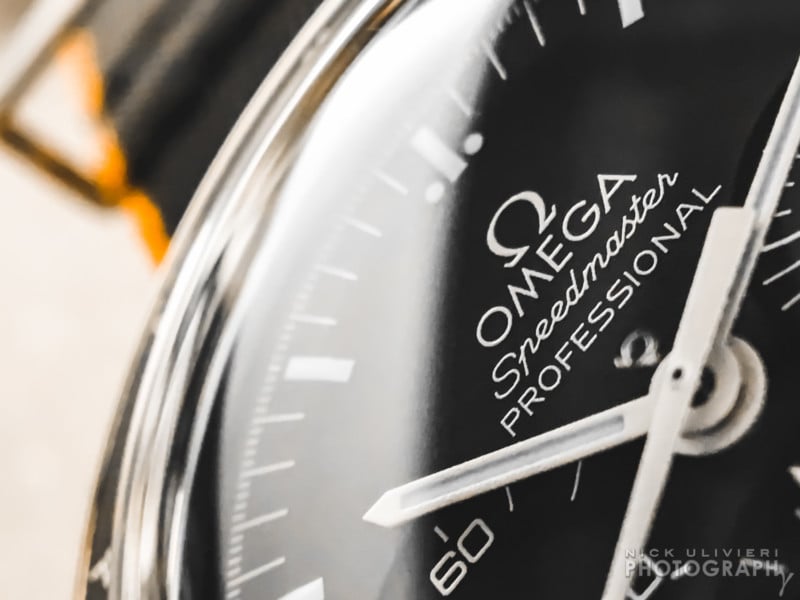 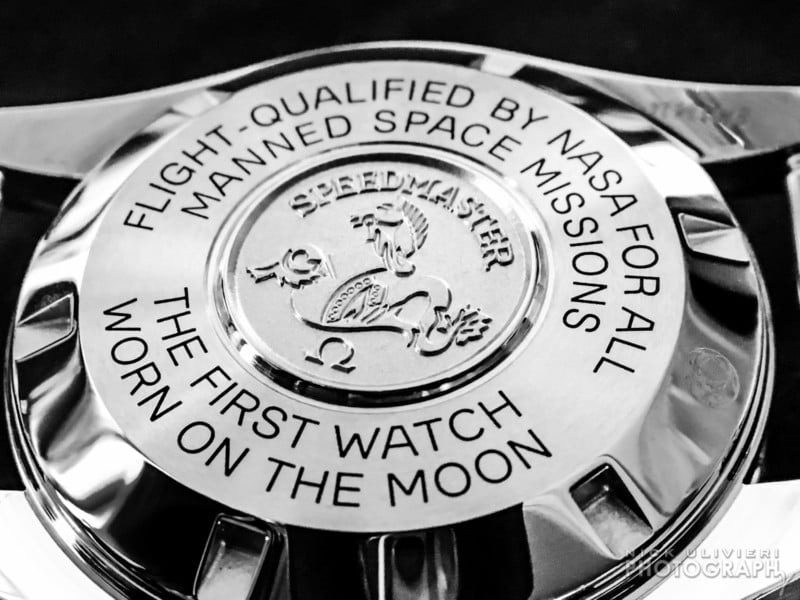 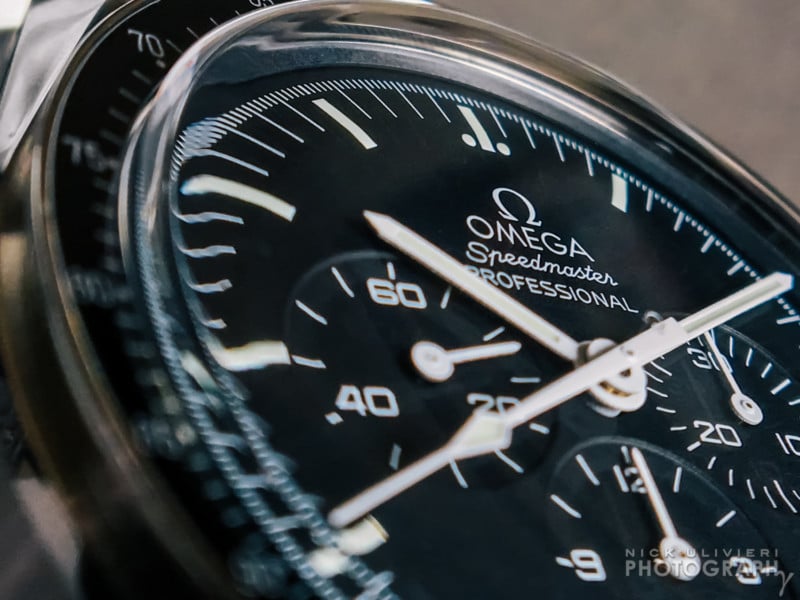 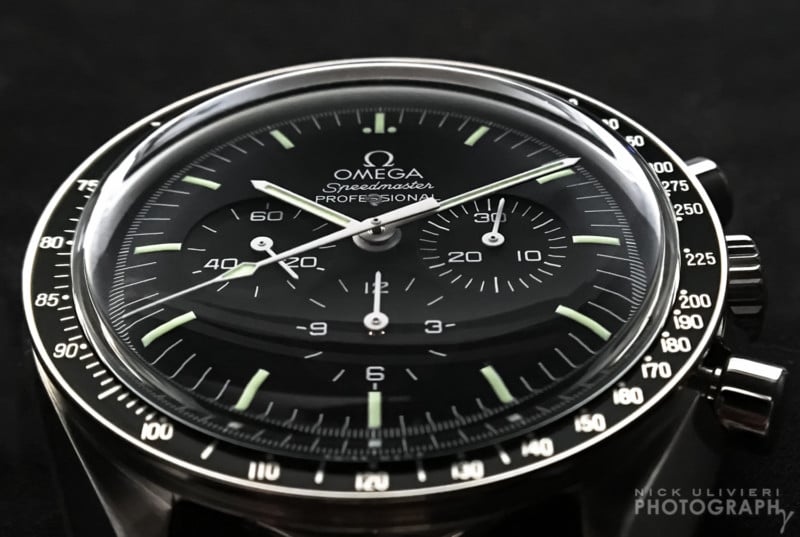 Before he packed up, Nick had one more idea he wanted to try. “I was really happy with all the photos I created, but started kicking myself for not trying to focus stack at least one angle,” he told us. “I have’t done much close-up macro product work like this, let alone focus-stack, but I knew focus-stacking was the only way to get full-depth focus so I felt like I still had something to prove.”

Unsure how to go about creating the focus stack, he looked up a tutorial on none other than PetaPixel itself!

“I pulled out the black sleeve, set-up the platypod, and wiped down and dusted the watch. Once my lighting was set (mainly using index card sized black flags to block the ambient light behind me) I simply started tapping my phone to focus on various parts of the watch to ensure I had enough frames for the full-depth shot,” he says. “In the end I took about 6 batches worth of images. The best batch, which went into the final stack (below) is comprised of thirteen individual iPhone frames.” 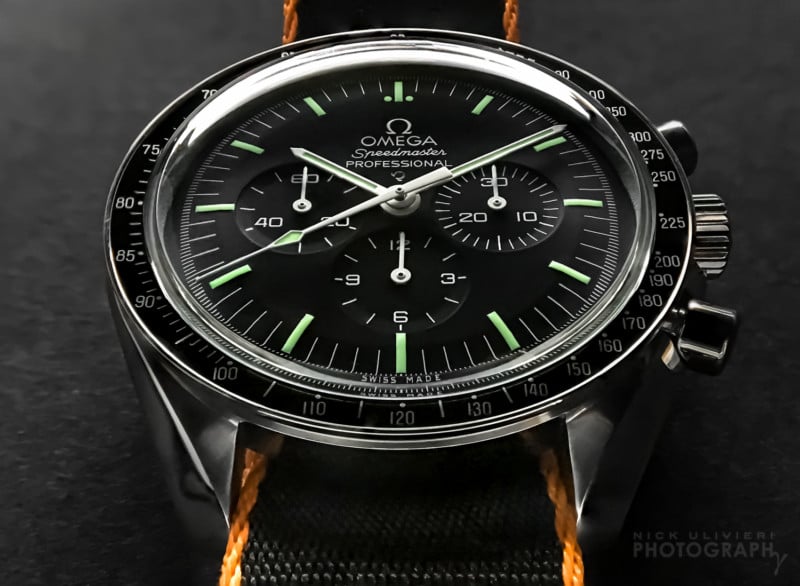 It’s not the camera, it’s the photographer. Make a face or roll your eyes if you must, but we love it when the photos make this point for us. To see more of Nick’s work—most of it isn’t shot on an iPhone—head over to his website or give him a follow on Facebook, Twitter, and Instagram.

Image credits: All photos by Nick Ulivieri and used with permission.

Full Frame vs Crop Sensor: Which is Better for Portraits?

This is How a Camera Adds 10 Pounds