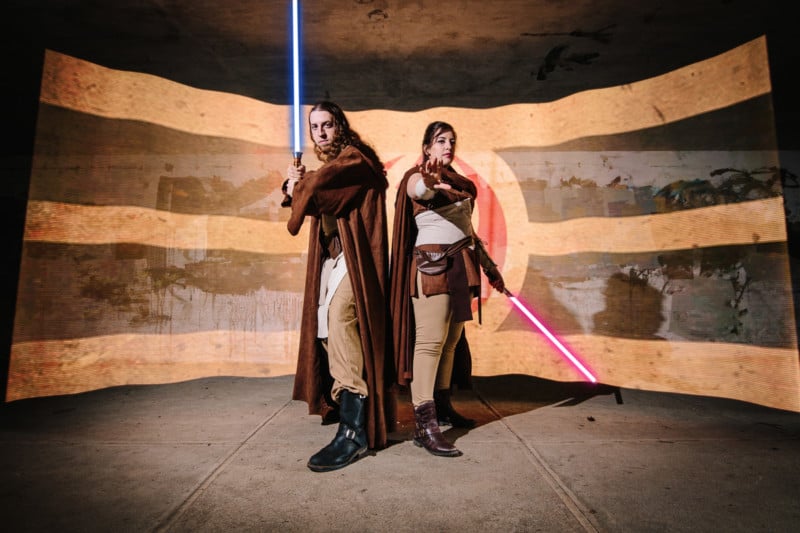 I’m a photographer out in Washington state, and I recently had a couple request some Star Wars styled engagement photos. That having been a dream of mine for some time, we kind of went nuts. We hired a skilled seamstress to trick out our couple in custom Jedi Robes, brought along a hair & makeup artist, went and found some very nice lightsabers, and drove over half the state to find our ideal location.

The weeks beforehand, I spent time researching. Star Wars movies, games, art. Drawings, paintings, sculpture, photos. And one of the many things I noticed was that… well, the average photo with a lightsaber on the Internet doesn’t look very good. That sucker’s overexposed, or the photo’s too blurry, or the highlights of the saber are blown, and so forth. 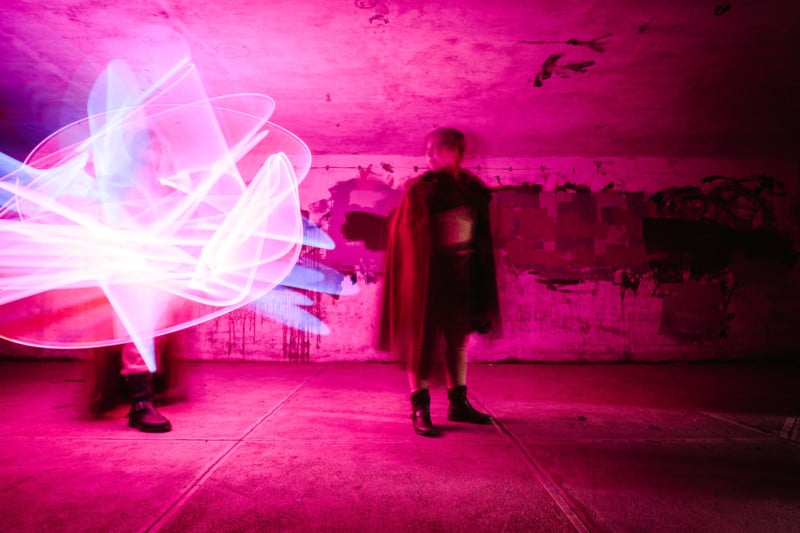 Being mister big-bad professional photographer for some time now, and being pretty slick at mixing different light sources, I thought I wouldn’t have that sort of problem.

Holy CRAP was I wrong. That nonsense is difficult.

So let’s cut to the point: I learned a lot about why it’s hard, I came up with some solutions, and I’d like to share them with you. Those of you smarter than me can add your own solutions in the comments as well.

The problem is that the Lightsaber is a non-variable light source. I know this one seems obvious, but it needs to be thought about. Normally, when shooting portraits, you’re dealing with two light sources:

This is REALLY important.

When mixing light, you’re usually working around the ambient light you’ve planned for or been given. Your strobes have variable output, and so you can adjust them to suit your needs. The ambient light, on the other hand, can’t be changed. You can only change how your camera perceives it. Too bright? Drop the ISO. Maybe stop down the aperture. Faster shutter speed.

The flash, on the other hand, is something you can change in response to that. A good flash will give you enough power to work with even on a bright sunny day (gotta fill in those eyes!), and will help make up for your camera dancing around whatever ambient light you’re using.

But now let’s throw in that lightsaber. Like the ambient light you’re working in, the lightsaber is a non-variable light source. T

here are no lightsabers on the market that can change how bright or how dim they are. I’ve seen a few that can change color, but nothing with changing luminosity. If you have someone holding it up next to their face, it’s now throwing its color all over their skin. Too little and it looks fake, like it’s not even there. Too much and it looks awful. So you need just the right amount.

And how do you do that? How do you make sure the lightsaber is properly exposed and showing just the right amount of color in the photo?

By changing the ISO, shutter speed, or aperture of your camera. The same thing that’s controlling your ambient light. Lighting too bright? Better lower the ISO CRAP NOW THE LIGHTSABER IS NOT GLOWING. Okay, let’s open up the aperture to bring that glow back DANGIT IT’S TOO BRIGHT OUTSIDE NOW.

Making it even MORE difficult is this unfortunate reality: Not all lightsabers have the same luminosity. Some brands, some colors are brighter than others. 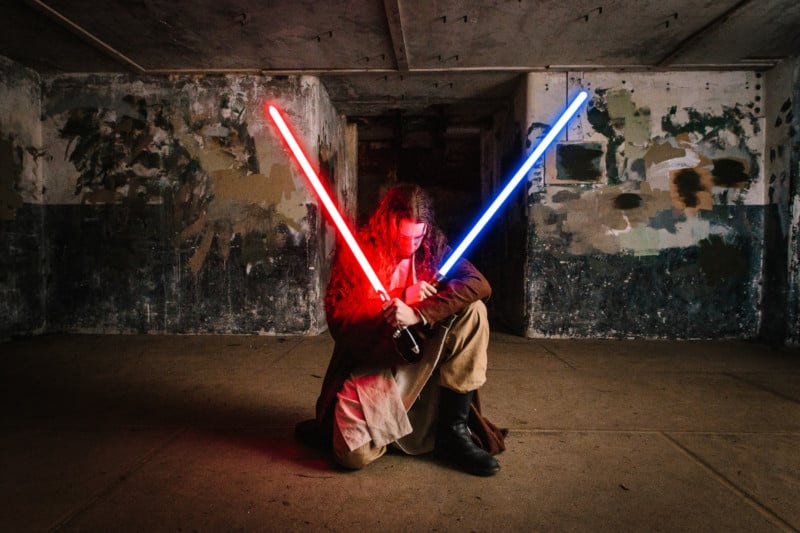 So what do we do?

The problem is essentially that we have three sources of light (Ambient, Lightsaber, Strobe) and two of these are complete jerks who won’t change their luminosity like our good friend the strobe.

The solution is to eliminate (if not completely, then almost completely) one of those unyielding light sources—the ambient light.

This is why some of the better lightsaber photos out there are in the dark, indoors, or in studios. I’m serious, if you go and look at some of the best star wars imagery (painting, photography, whatever) you’ll find that the best ones usually all but eliminate ambient light and make their own using strobes.

This image is digitally rendered, but it’s a wonderful example of what I’m talking about.

So is this one.

Notice that, in each of those photos, the Lightsaber is emitting a certain amount of colored light that’s influencing the image, but really only on things that are within maybe 2 feet of them. They’re casting red on Kylo Ren’s arms, they’re casting red on Darth Vader’s billowing cape and fore-arm. And the rest of the details? The rest is being lit up by some other external lighting source. Kylo Ren’s got something blue-ish going on mostly to his back, and something green below. Darth Vader’s being lit by studio strobes, or something definitely meant to look like it.

And, honestly, that’s what we found worked best. Our coolest shots were the ones where we could most effectively blend strobe and lightsaber. This shot here is probably my favorite example. 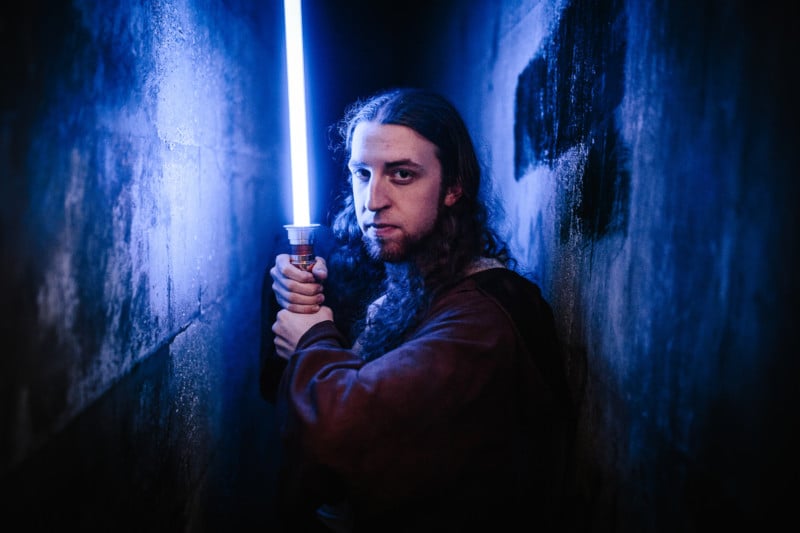 Here’s another one with the pink light saber: 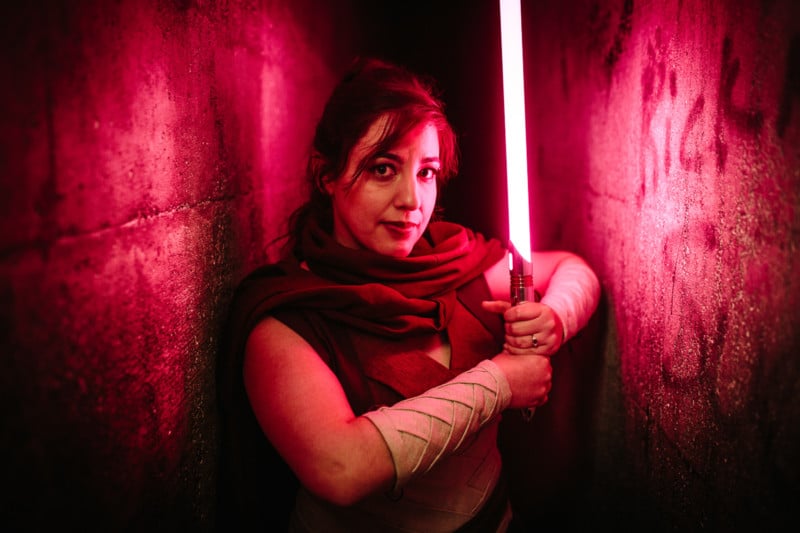 We’re shooting in a totally pitch-black environment, but notice that not everything is just oversaturated blue or pink. It sure as shoot LOOKS like that lightsaber is our only light source, but it’s clearly not. You can see pink skin tone, brown robe. I’m standing there with a speedlite on my camera, bouncing it off the wall to my immediate right. Not hard, right?

So my conclusion after all of this is that, next time I do this, I’m going to be choosing a location where I can either completely control the ambient light, or where there’s near zero ambient. When in a dark location, I can pick and choose exactly how much that lightsaber is going to glow by changing my camera settings, and then I can use strobes to light other details of my subject, or even possibly the environment. Bada-bing, sweet portraits with a Lightsaber! 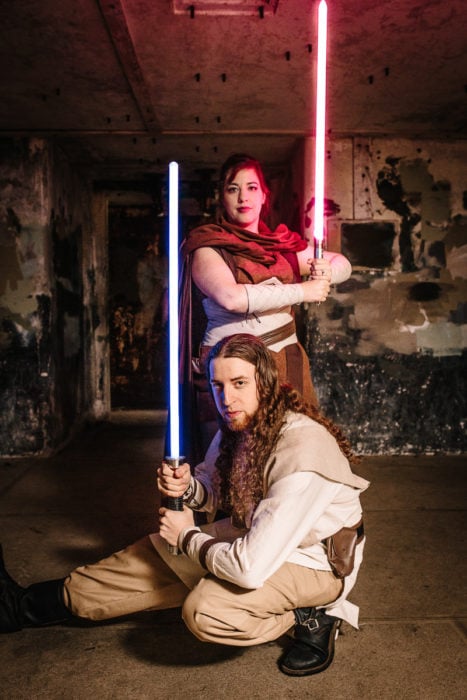 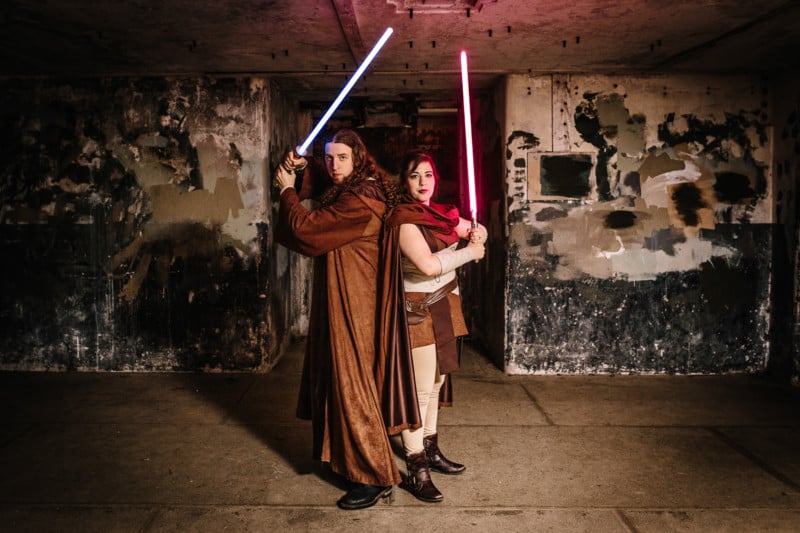 So what do you folks think? Have you ever had trouble shooting something like that? Did you find any different solutions? Share your thoughts in the comments.

About the author: Jason Comerford is a Washington-based photographer who specializes in weddings, families, and all manners of portraiture alongside his wife Hannah. You can see more of their work by visiting their website or giving them a follow on Twitter, Facebook, and Instagram.