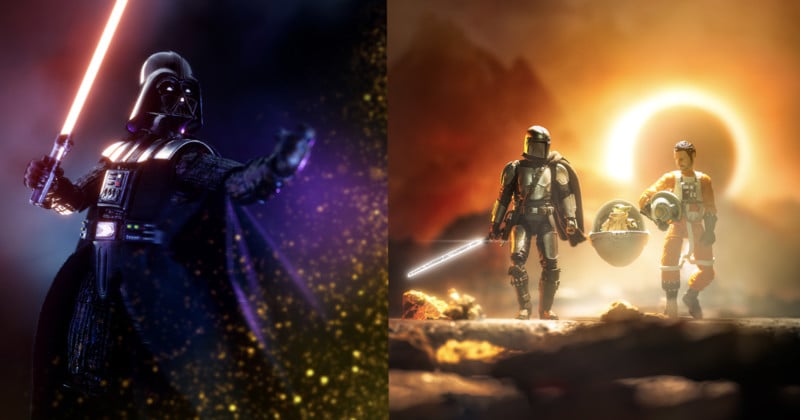 As a young fan of Star Wars, Alfonso Dominguez Lavín has grown into an experienced action figure photographer who creates unique scenes from the universe of Star Wars and other sci-fi worlds.

Photography has been an important part of Lavín’s life for the best part of 20 years. His life has been influenced by the pop-culture phenomenon of Star Wars even longer — ever since he was six years old.

“My mom told me that when I first watched ‘Episode IV: A New Hope,’ I became a little Jedi and made buzzing sounds everywhere we went,” Lavín tells PetaPixel.

“More recently, The Mandalorian TV Show came to Disney+ and later, in 2020, during the pandemic, I started to collect Hasbro Star Wars Black Series figures from a local store called Frikipolis and for a year we’ve been making some collaborations. Before that, I had almost 200 Star Wars Lego mini-figures and some relevant ships — X-Wing, Tie Fighter.”

Looking back on his first toy photographs, Lavín is humble and says they were “a disaster.” But, with the help of an online community and YouTube videos he was able to learn different tips and tricks that have grown his expertise. 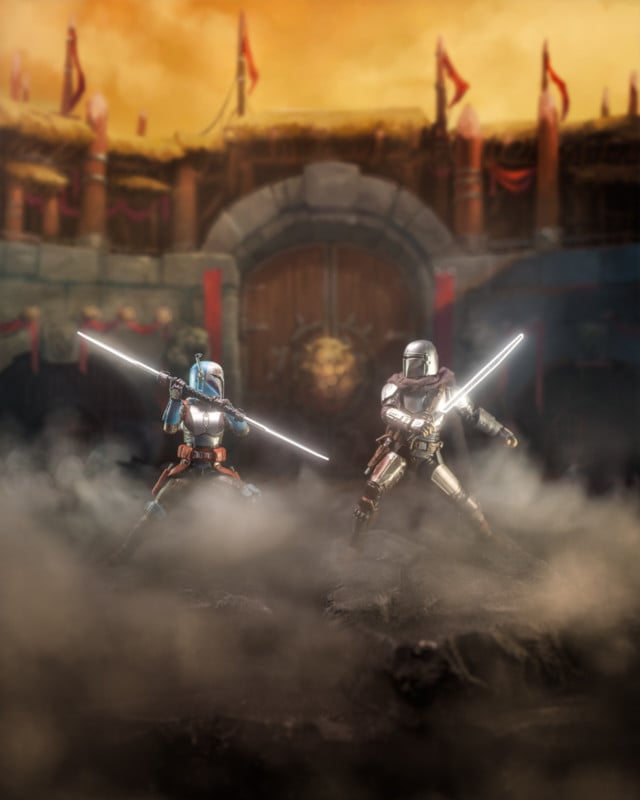 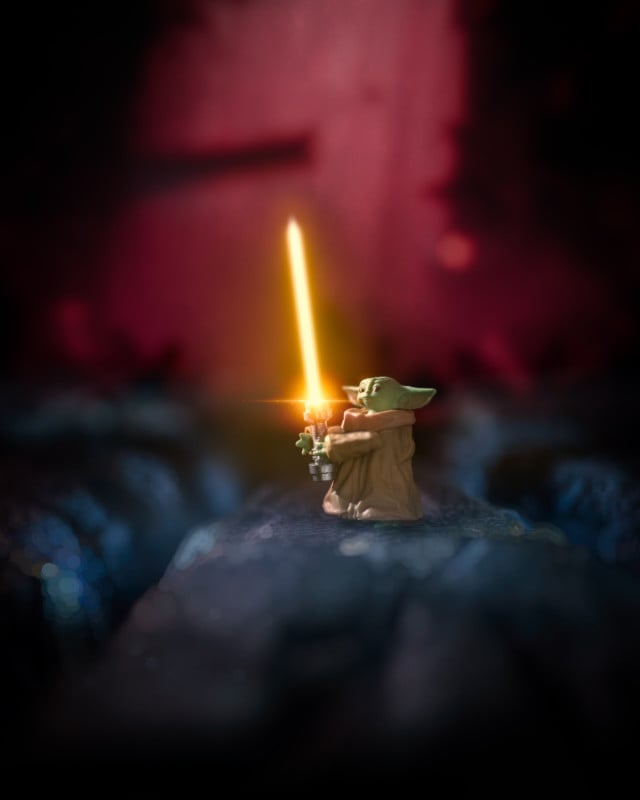 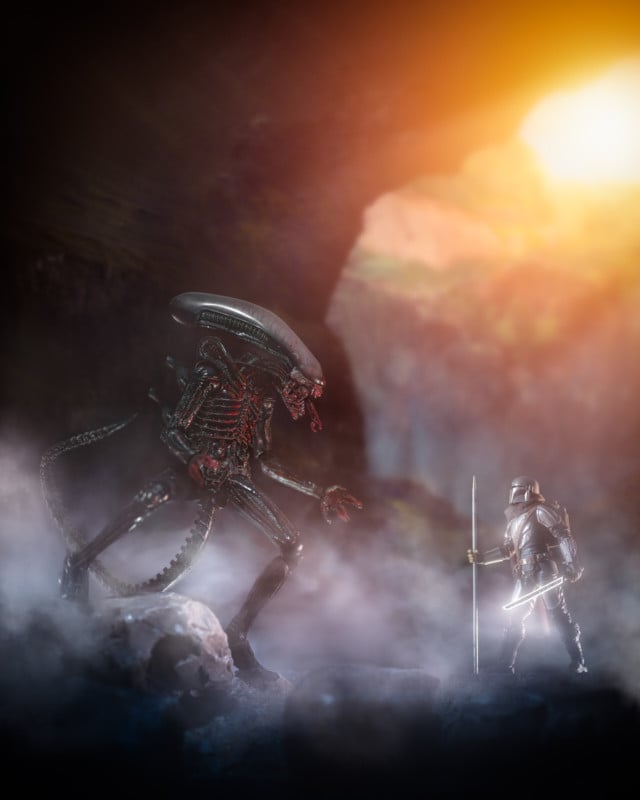 “What fascinates me the most is the freedom to create all kinds of scenes around all the Star Wars lore,” Lavín explains. “You can go for Legends, you can go for Star Wars Canon, or even you can go for mash-ups with other worlds. Alien, Predator, Jurassic Park, or eventually Marvel Cinematic Universe (MCU) stuff matches perfectly with Star Wars.”

Creative Sci-fi Scenes on a Table at Home

When it comes to drawing ideas, Lavín finds them in abundance from a few different sources — his own creativity and vision, other people’s work in the community he engages with, and the Star Wars lore which has seen a growing interest from the public in the recent years. 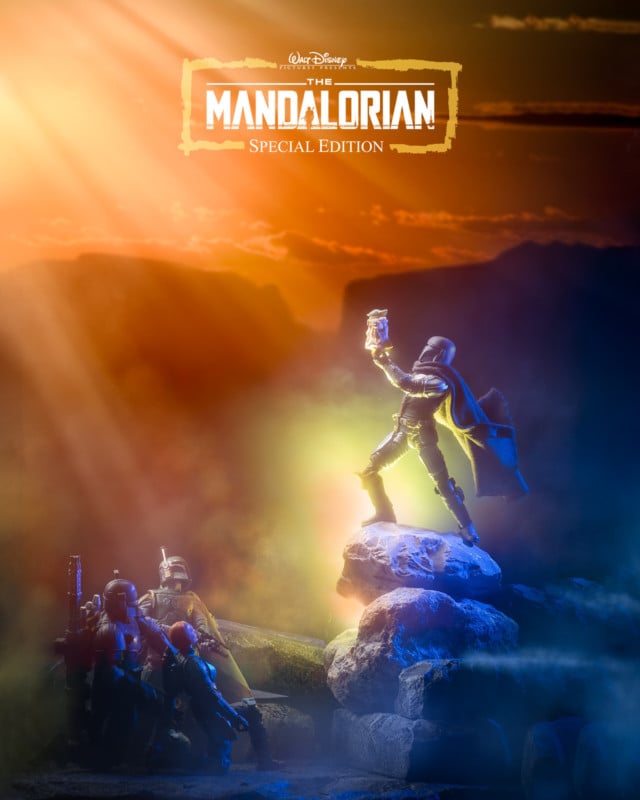 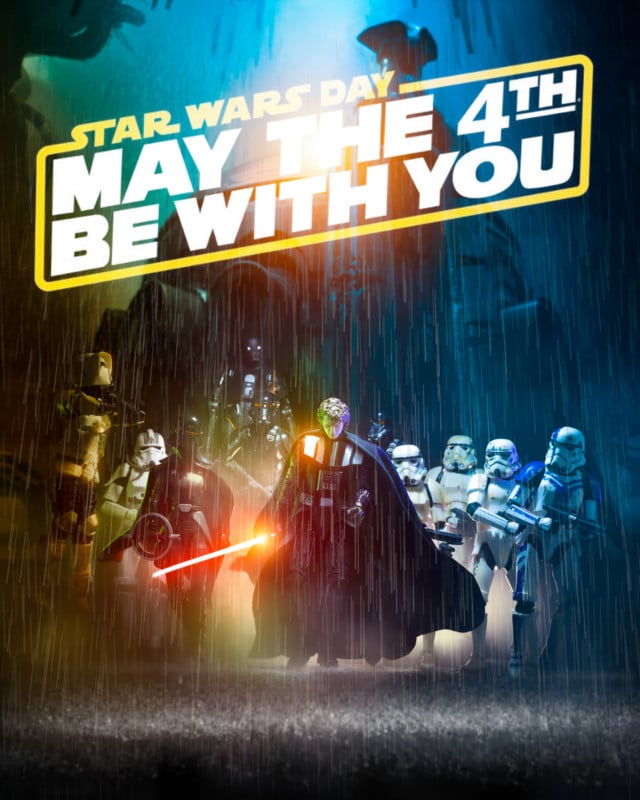 “There is so much hype, a lot, we are witnessing a Star Wars Renessaince since The Mandalorian was aired,” he explains. “Comics, TV Shows, figures, etc. Star Wars is everywhere.”

Once Lavín develops an idea, he usually shoots in his office at home, using an improvised table with all of his props on it. Since starting toy photography, he has amassed a collection of items that can be used, like dioramas, wood, rocks, sand, and others he adds when improvising on the spot. 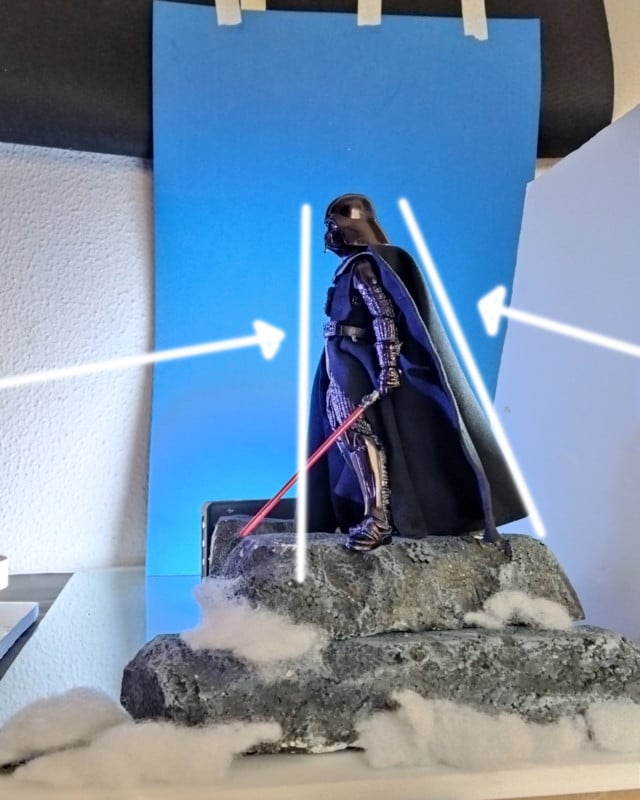 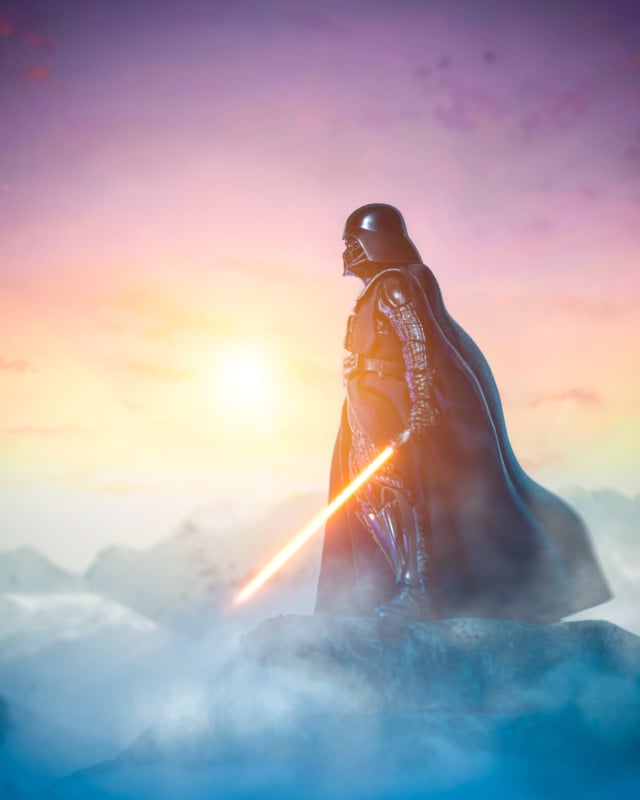 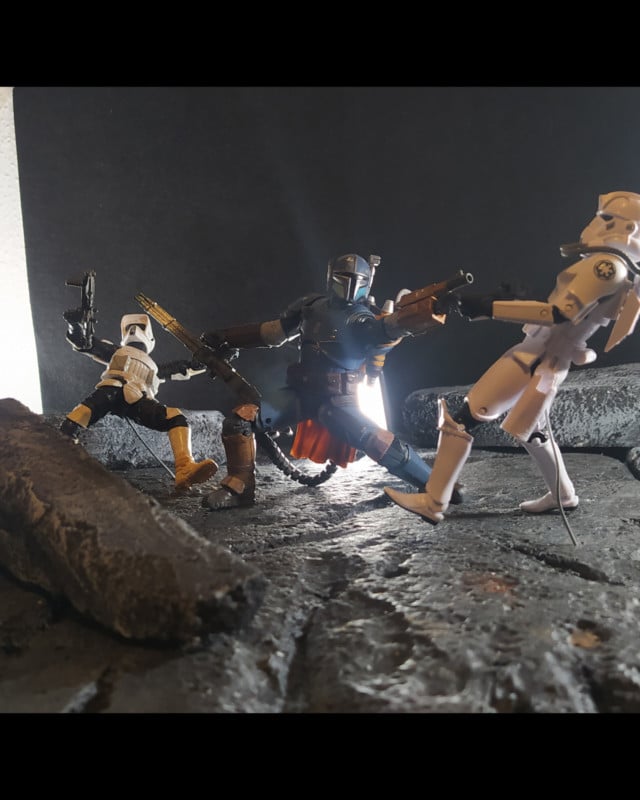 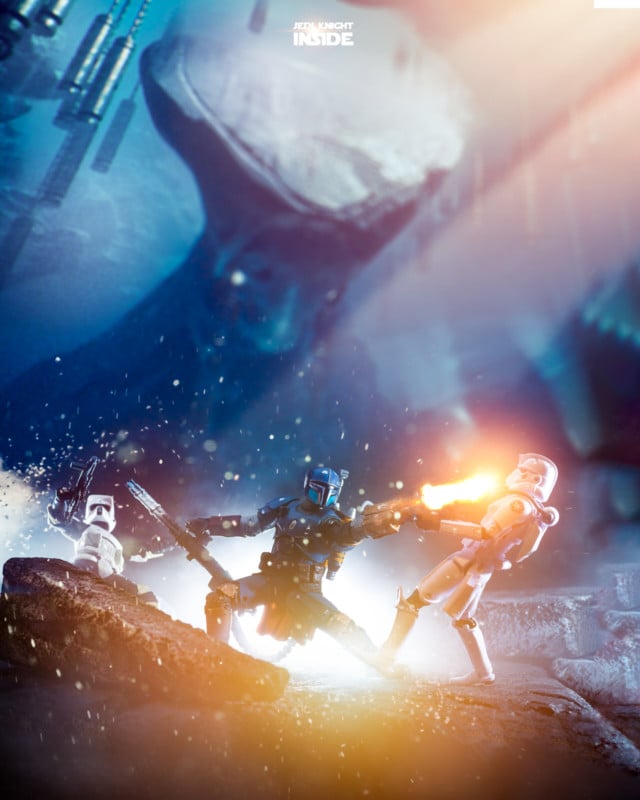 He first visualizes what he wants to achieve and starts with a mix of different elements on his table. After a few shots, he adjusts the scene or corrects the pose and repeats until everything comes together as intended. 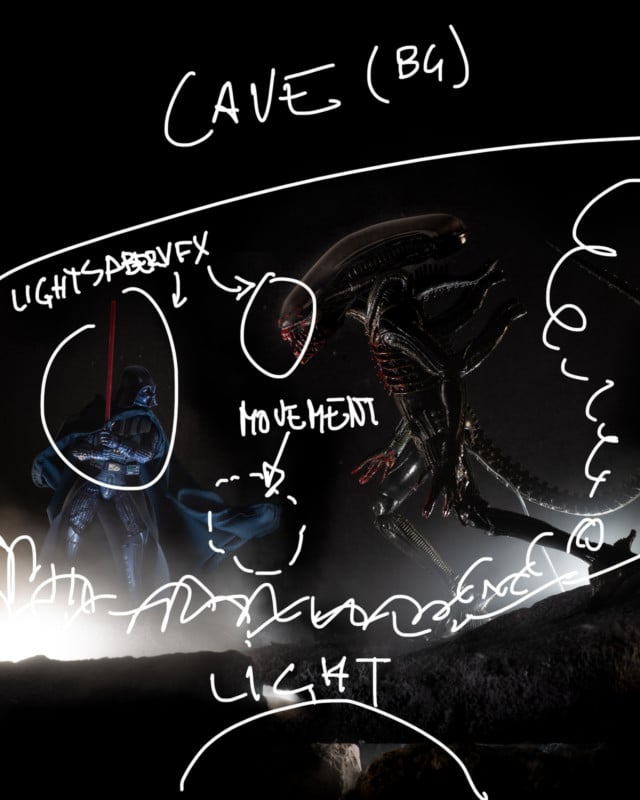 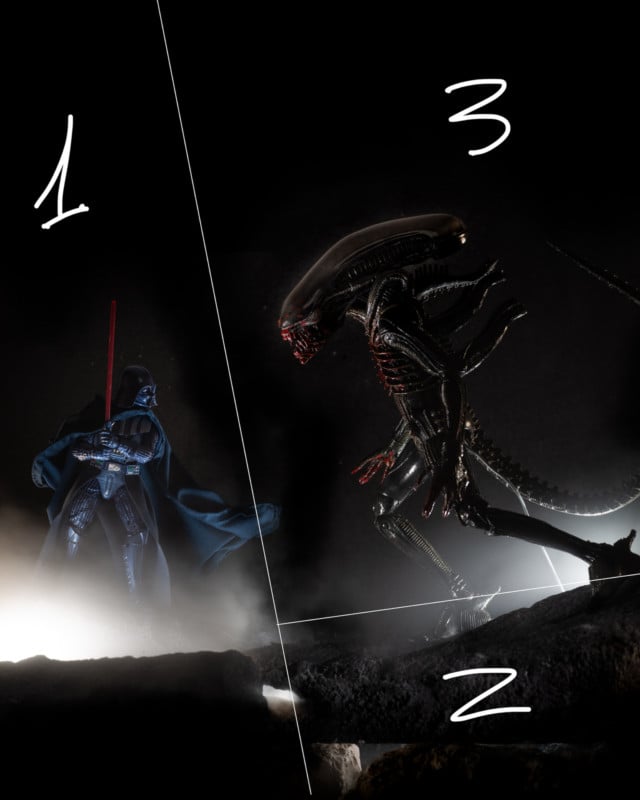 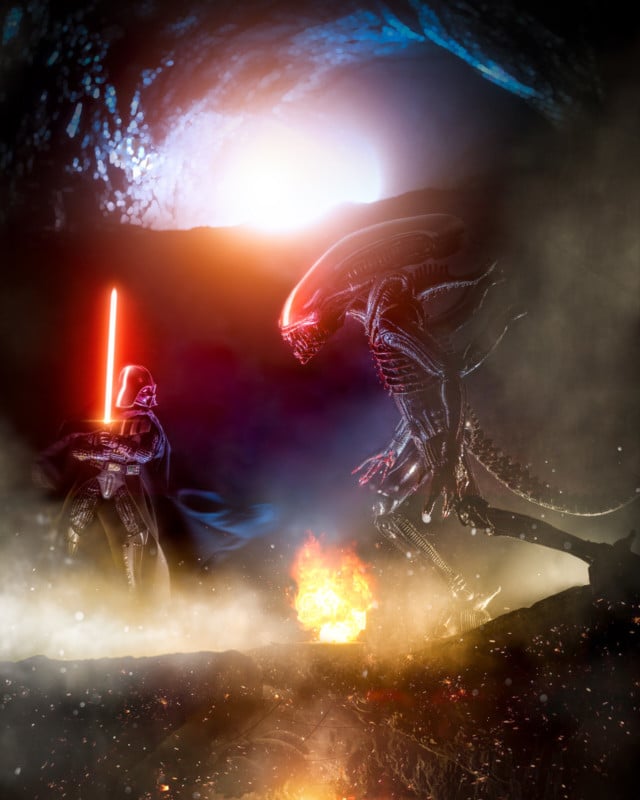 “Of course, I own my mistakes, and sometimes what I think is right it doesn’t work for others,” he notes. “It doesn’t bother me. As a friend of mine says — push yourself, you’re competing against yourself. You have to be better for yourself not for anyone else. 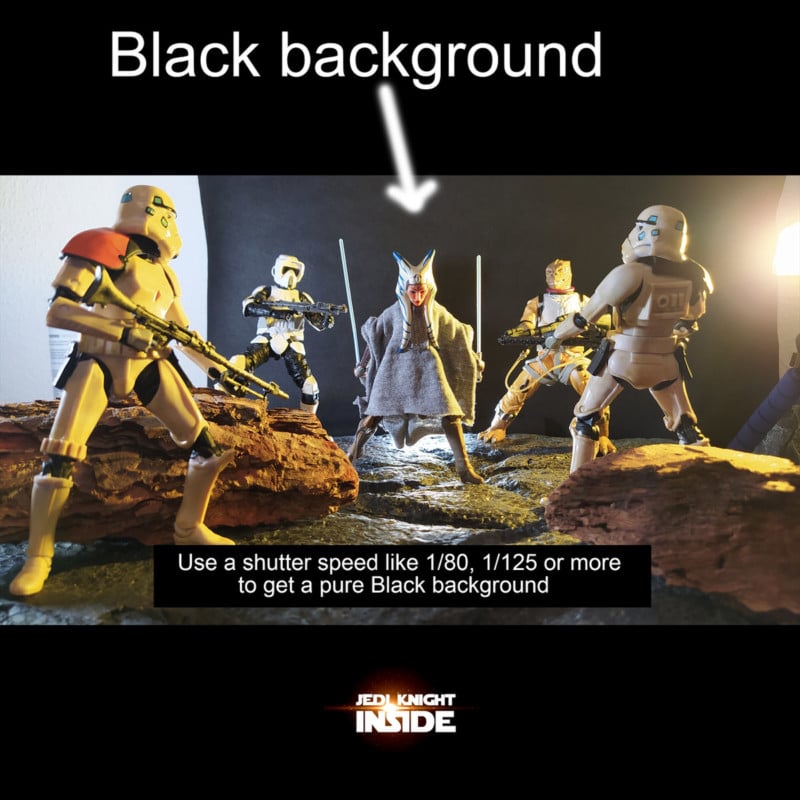 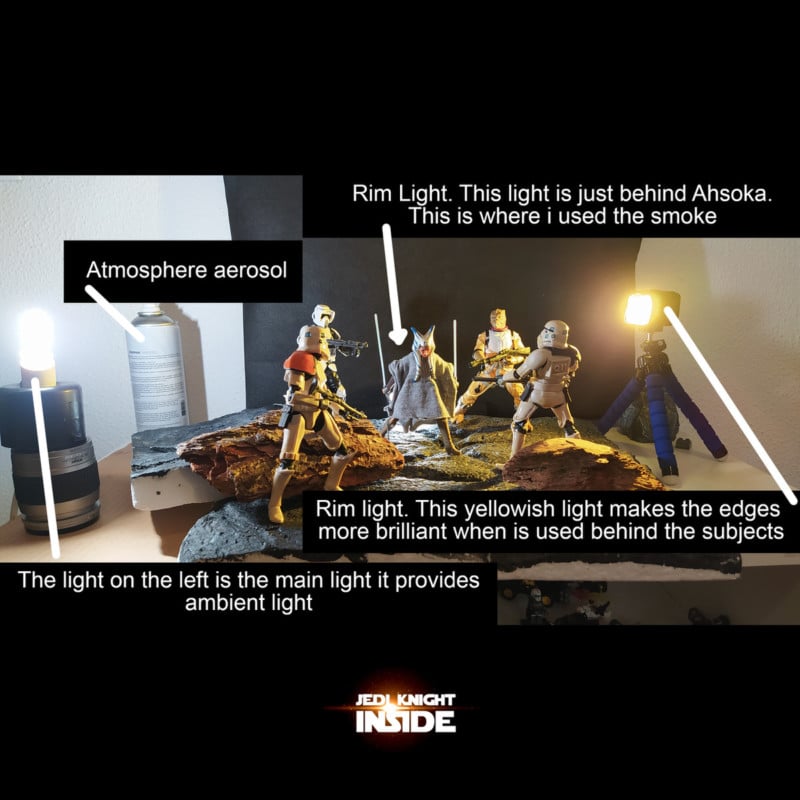 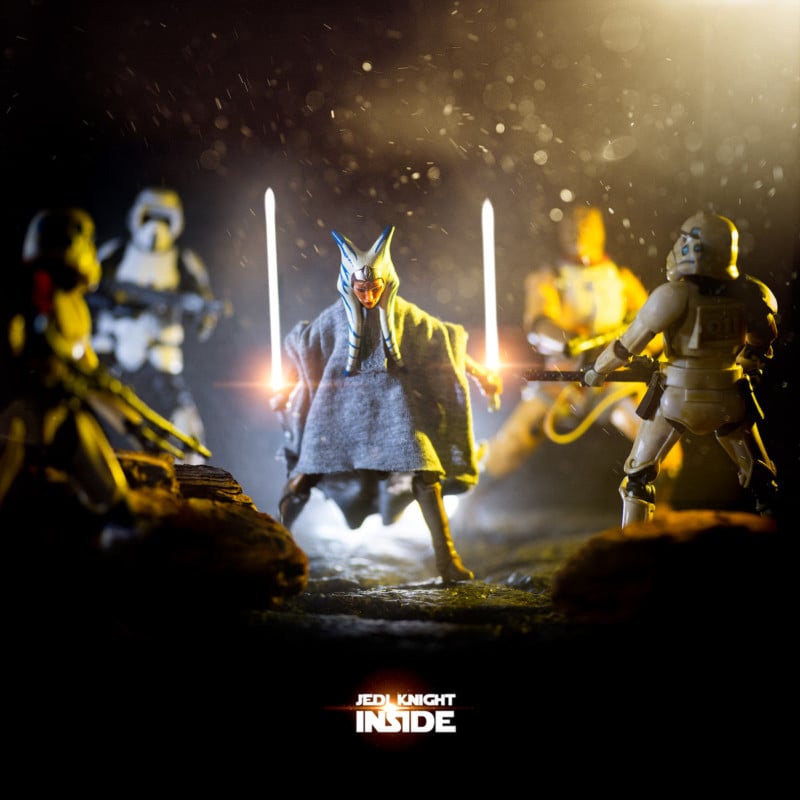 When the scene is done, he puts his photos into Lightroom and edits all picks at the same time. Doing so helps him choose the best edit out of the series. 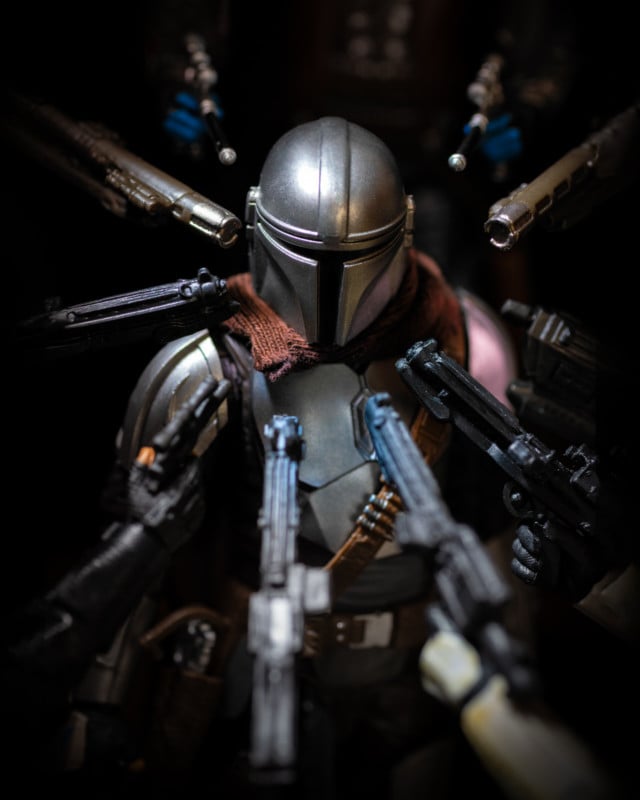 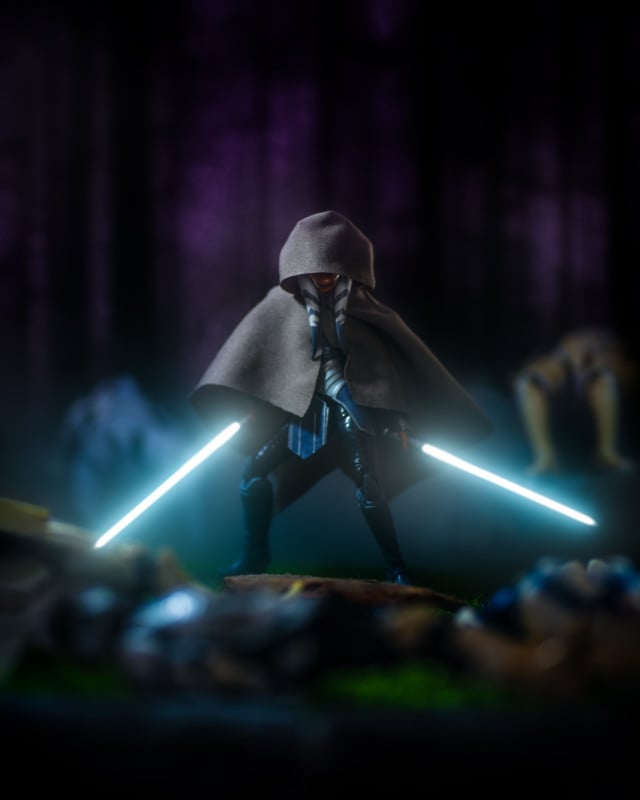 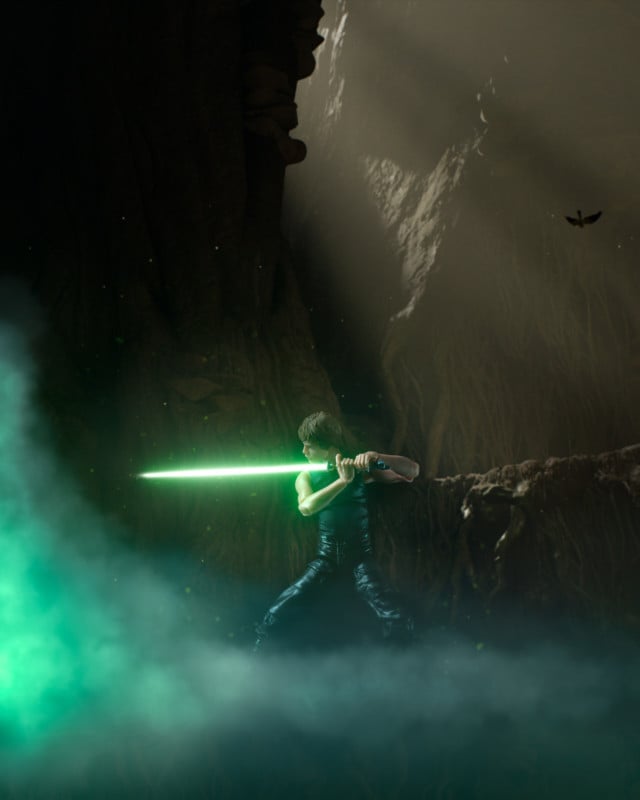 “I open three to five pictures in Photoshop and merged them using masks and choosing the right parts,” Lavín explains. “I blend all together, then it’s time for some VFX effect like the lightsabers or blaster shots. I use the Oniric plugin from Composite Nation. It’s the real deal. It makes me be in control of the light as I wish.” 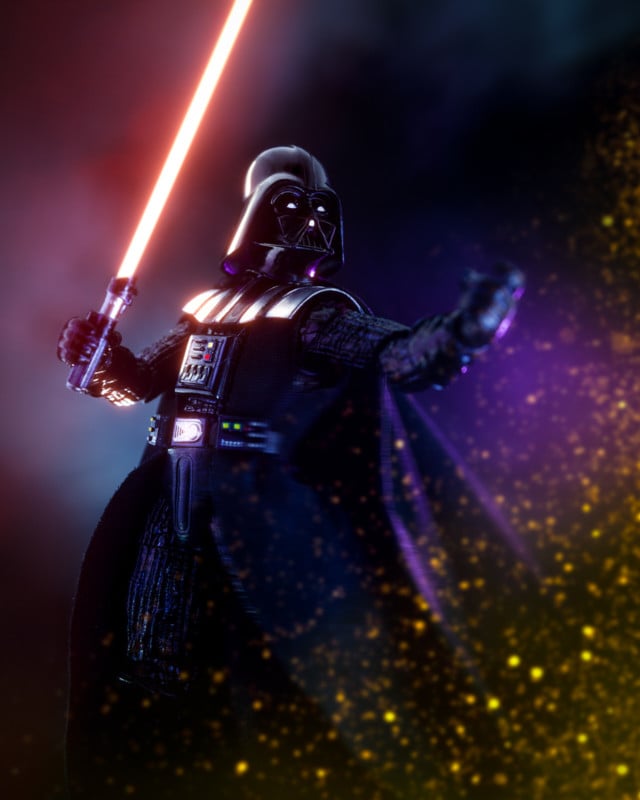 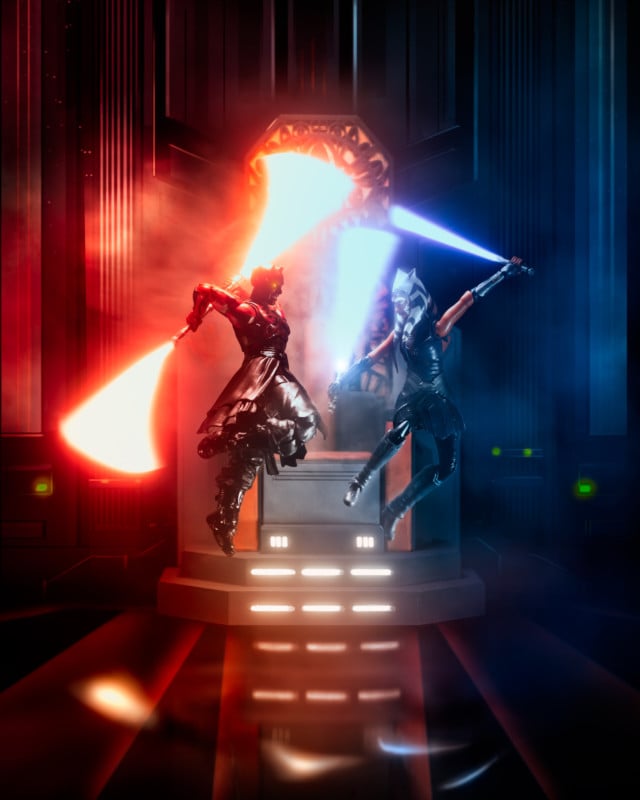 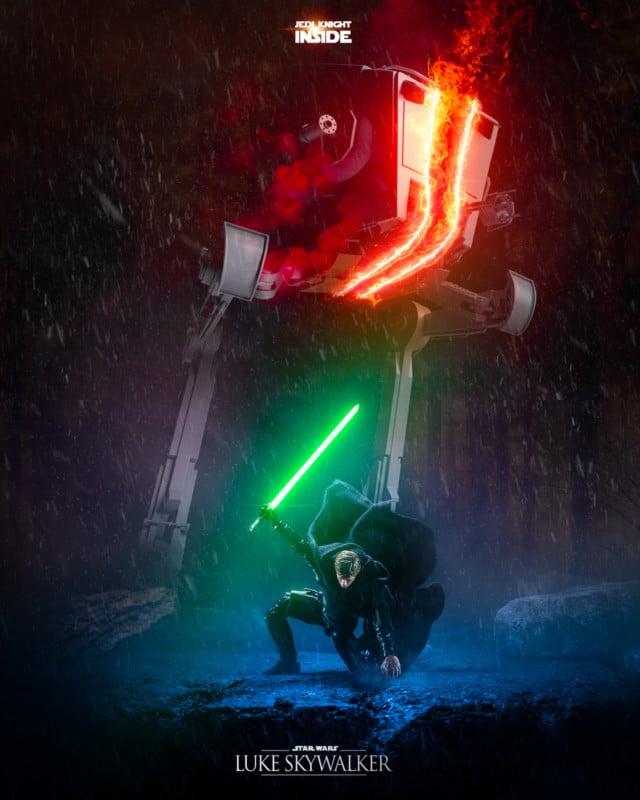 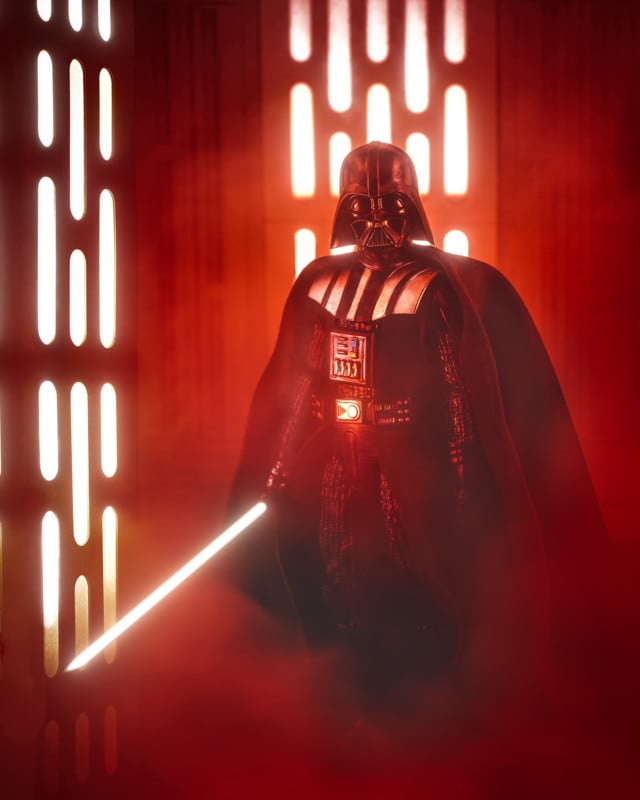 One aspect that makes Lavín’s workflow slightly different to most photographers is that he is colorblind and has issues with reds, greens, magentas, and blues. To help with editing, he invested in a screen calibration device and a good monitor which have helped tremendously. But, if he gets stuck, he also asks his wife or kids to have a second opinion on the edit. 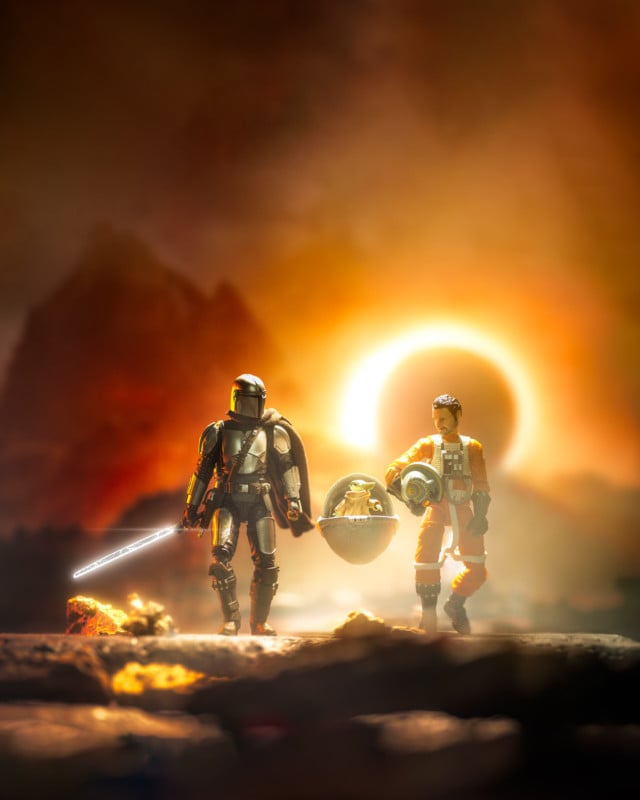 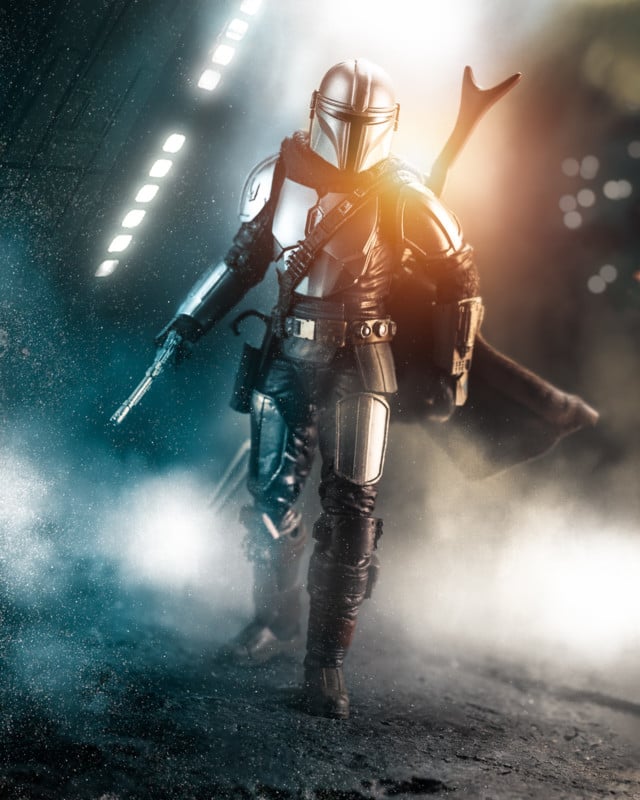 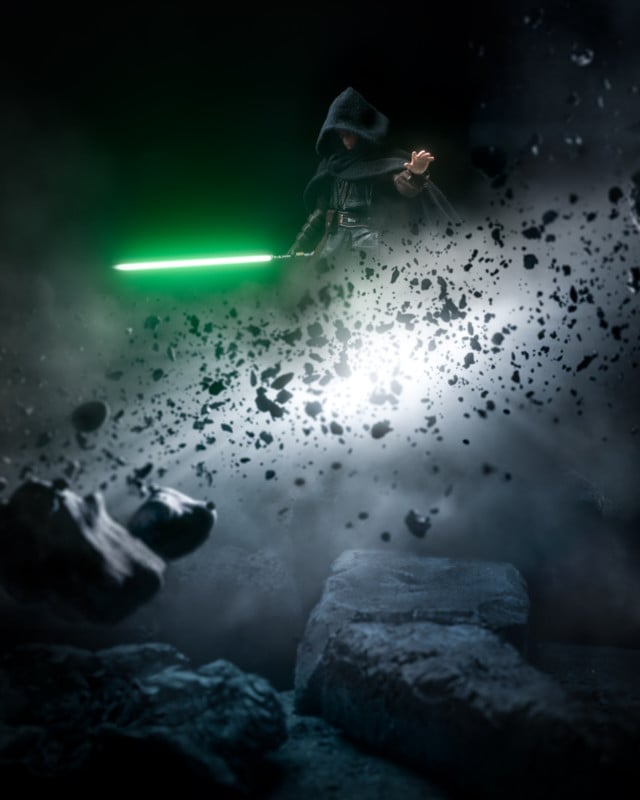 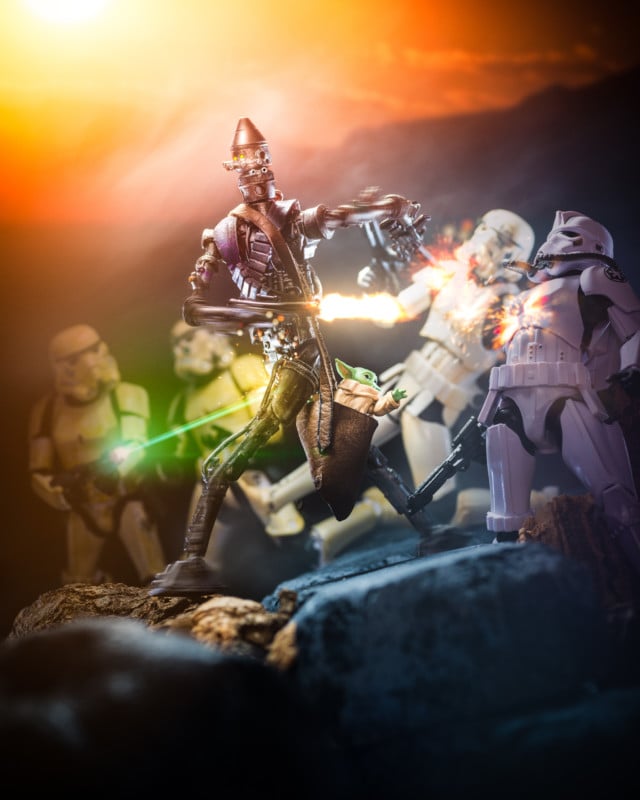 For Lavín, action figure photography is everything. Looking ahead, he foresees his future filled with plenty more photography and a growing collection of figures from Star Wars and other worlds, not least because his son has also become a big fan of the MCU.

While his budget dedicated to his hobby is limited, he doesn’t intend to stop nor does he want to return to other types of photography.

“This is my way,” he says. “Everything before led me to this moment.”

More of Lavín’s work can be found on his Instagram.