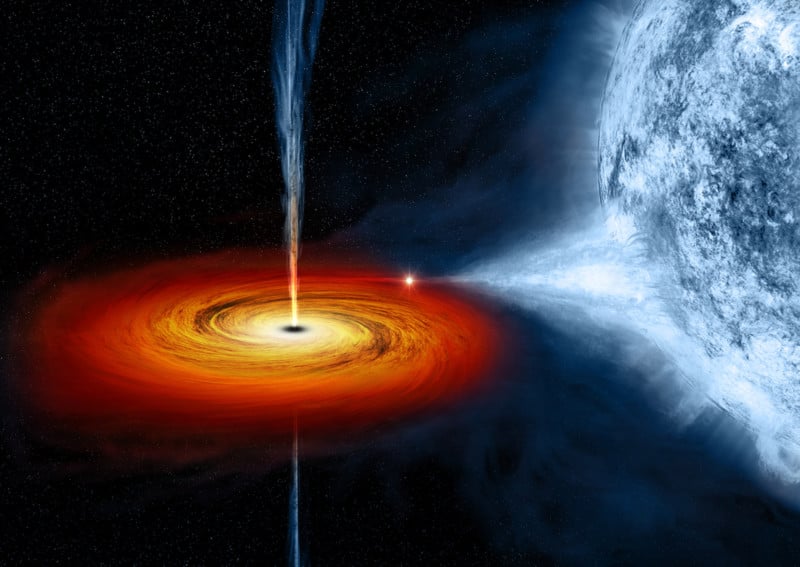 There are no real images of a black hole, only artist renderings like the one above and that really cool CGI version in the movie Interstellar. But that may change in the coming years thanks to an algorithm recently developed at MIT.

Created by a team lead by MIT grad student Katie Bouman, the algorithm is basically an intelligent stitching software that compiles images captured by the international collaboration known as the Event Horizon Telescope array.

“[Taking a picture of the black hole in the center of the Milky Way galaxy is] equivalent to taking an image of a grapefruit on the moon,” says Bouman on MIT News. “To image something this small means that we would need a [radio] telescope with a 10,000-kilometer diameter … the diameter of the Earth is not even 13,000 kilometers.”

A single radio telescope that size is obviously an impossibility, but the EHT is trying to be just that… sort of. By gathering data from radio telescopes from around the globe, the EHT acts like an Earth-sized radio telescope. All you need is a fancy algorithm that will stitch together all the separate images captured by separate radio telescopes (at different times) and fill in any gaps to form a coherent whole. That’s what Bouman and her team have developed.

They’re calling the algorithm CHIRP—short for Continuous High-resolution Image Reconstruction using Patch priors—and while it has some hurdles to overcome, it may be the solution that gets us our first real image of a black hole. What’s more, Bouman tells PopSci that photos might not be the end of it. “Ultimately,” she says, “we might be able to make movies of materials being eaten by a black hole.”

To learn more about this algorithm, how it works, and the challenges it faces, head over to MIT News.