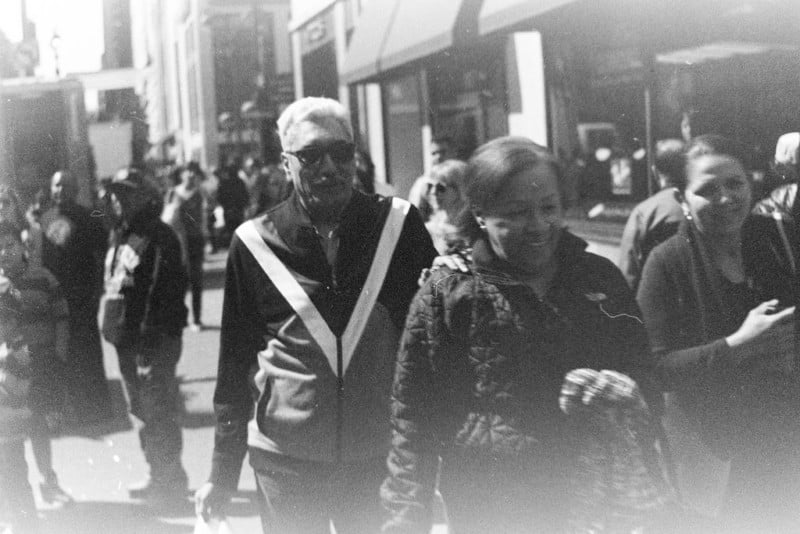 I found them on the bottom of a box in a New Jersey antique shop filled with photographic junk from years gone by. They were just sitting there, four faded yellow boxes mixed in with haze covered filters, dirty lens caps, ancient darkroom thermometers and broken cable releases.

The box said Kodak Plus-X, one of my favorite black and white films discontinued not too long ago, and they didn’t even warrant a place in the locked cabinet above were all the “valuable” stuff was displayed.

My film fridge at home actually has a few similar boxes with expiry dates in the last decade. I didn’t realize this relatively modern medium speed film was made so long ago, because these antique shop film boxes said they were packed in “tropical packing” and should be developed no later than December 1945. I read it twice not sure I was seeing that date correctly, but sure enough, 1945. For $2 for all four boxes, I thought, “what do I have to lose.” 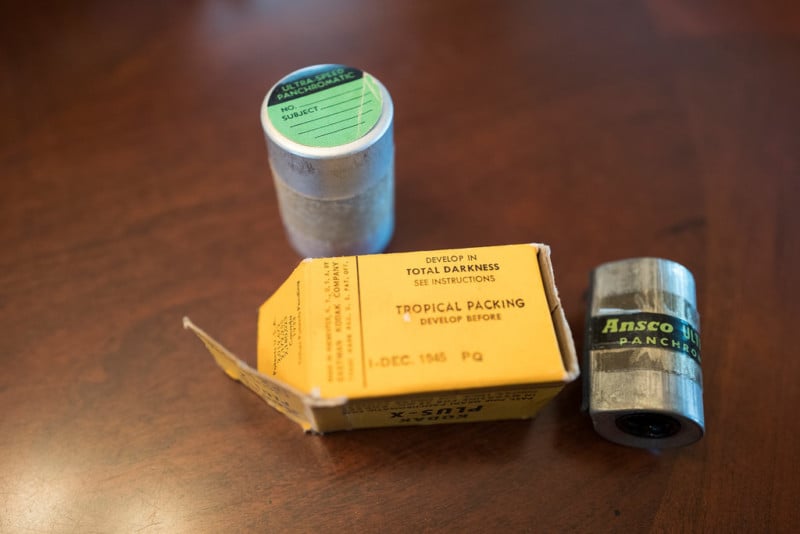 I took the boxes home and immediately started to research how I might go about shooting film this old. My research revealed this film was introduced around 1939 and first started appearing in various Kodak ads around 1940.

I thought that maybe this film was made for the war effort. Maybe a U.S. Army Signal Corps photographer carried this film ashore at Guadalcanal or Tarawa. Maybe a sailor far away from home carried this film and never got to use it. Or maybe it just sat in a warehouse in New Jersey somewhere before being sold as surplus. In any case, I was holding it in my hands now and I couldn’t wait to see how it would work.

The film itself was packaged much differently than what we see today. A detailed data sheet was enclosed including information on the raw materials required to make developer and how those materials should be mixed. I decided this film was best exposed using a lens from the same era, so I went with a 1951 collapsible F2 Summitar mounted on a Leica M6. After some difficulty getting the camera loaded—which involved the leader tearing and several trips to the darkroom in my basement—I finally had it loaded and ready to go. 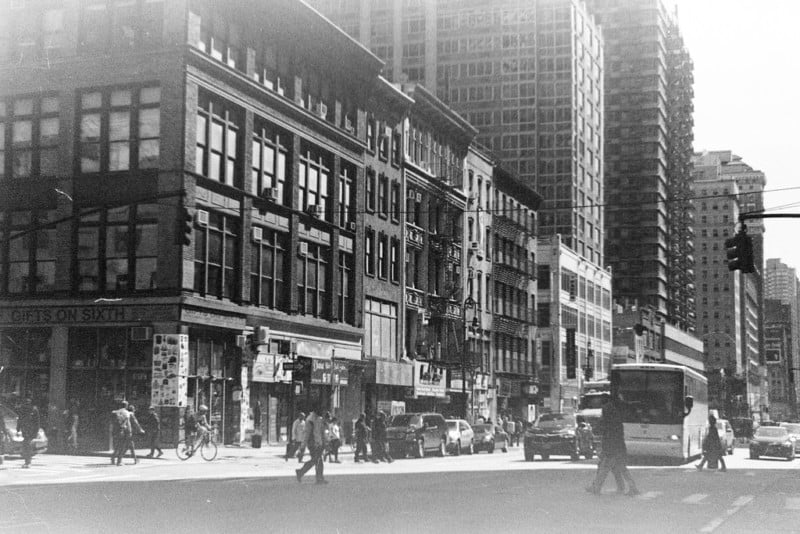 Exposing the film was a bit of a gamble. The rule is to overexpose by 1 stop for each expired decade, but 7 stops below ISO 100 or 125, the nominal rating for this film, would be ISO 0.8.

Overexposure is required because old film absorbs radiation over the years and fogs. The film is essentially partially exposed, so overexposing allows the image to burn through the fog. The problem was that seven stops of overexposure would mean a 1.25 second exposure at F16 in bright sunlight.

I wanted to hand-hold and shoot this film the way it was meant to be used, so I decided to just go over by a few stops choosing ISO 25, which would be two stops of overexposure. This allowed shutter speeds ranging from 1/60 to 1/125 at anywhere from F2 to F5.6 in the daylight. 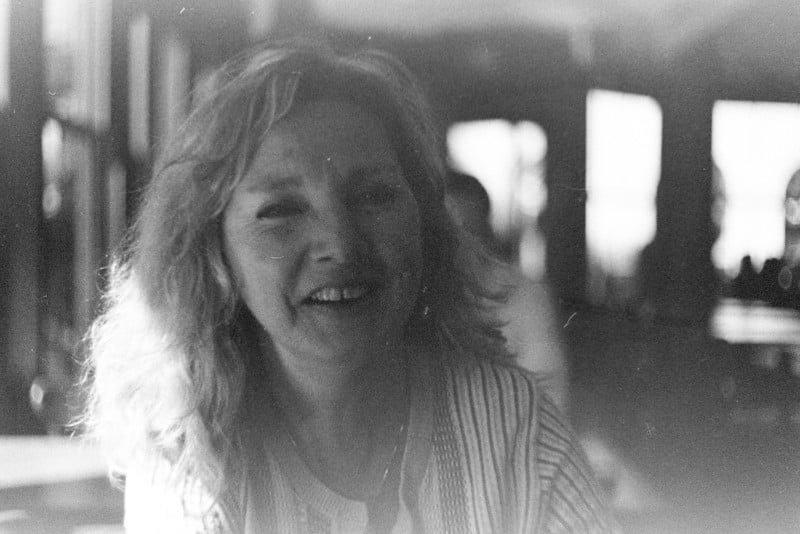 The other challenge was how to develop this film. Of course there are lots of experts on the Internet with lots of conflicting advice, but by turning to some knowledgeable people in a group I belong to, the Film Shooters Collective, I was able to learn a few things on how to do this properly.

The first element was to adjust the development time to account for the fact that I have pulled the film, i.e. overexposed, by two stops. This implied a 20% reduction in developing time, 10% for each stop. Hopefully, this would properly develop the highlights without blowing them out.

The other problem was how to develop the shadows, which normally is better done over longer development times and directly contradicts the reduced time required by the highlights. The answer here was to lower the development temps (which would extend the time) and also to use a developer that has some anti-fogging capability with some slight dilution—in this case, HC-110 (B).

Ultimately, I went with HC-110 (dilution B) for 5:45 seconds at 60 degrees Fahrenheit. I went with slightly more vigorous agitation to bring out some contrast, but other than that it was pretty standard. After an afternoon shooting in New York, I was ready to develop my film. 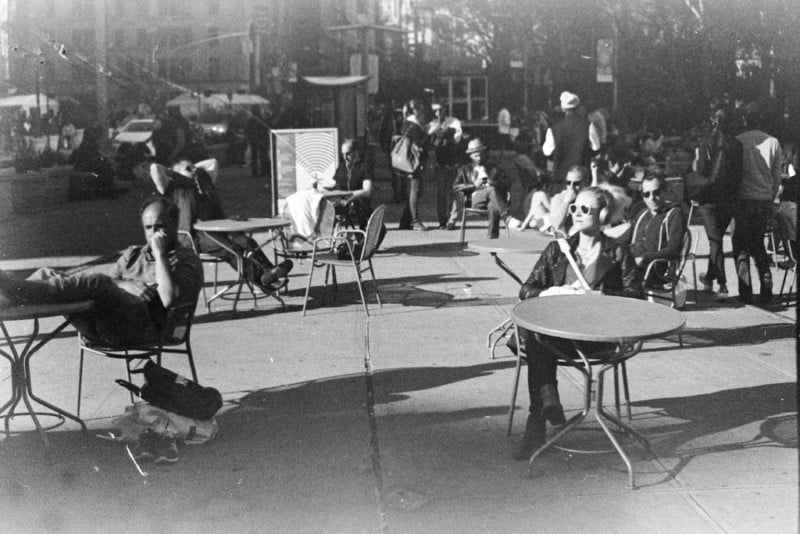 I had some trouble getting the film out of the camera and the curl was incredibly pronounced. I struggled to load the reel because the film seems just a bit narrower, but eventually, I was able to get it done and about 20 minutes later, I pulled out some fairly dark negatives that clearly had images on them.

I lost about 6 frames worth of film with my problems loading the camera, but the rest seemed to work and after digitizing the negatives using a wolverine scanner, I applied a slight contrast boost, but basically left them as is straight out of the camera. 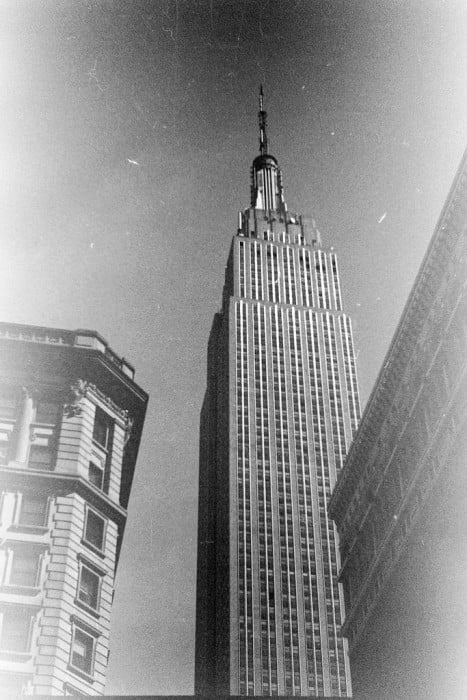 The vintage glass and the vintage film give a real old-school look and, in a few cases, people who have viewed these images in the last week mistook them for being taken 70 years ago and just developed.

These were actually taken in April of 2016 and I guess if anything, they prove that even unexposed film can be somewhat timeless. I have three more rolls and I will probably keep one in the box and display the other out of the box, but that means one more roll to shoot because, while expired film can be interesting to look at and observe, the best kind of film is exposed film. I’m glad I got a chance to finally use this film as it was meant to be used.

About the author: Tony Klimas is a New Jersey-based street photographer who loves capturing the simple beauty of people living their lives. You can find more of his images on his website and Flickr.

Mesmerizing 4K Cinemagraphs Made from Photos Captured from the ISS

Leaked Photos: New M-D Will be the First Production Leica Without an LCD