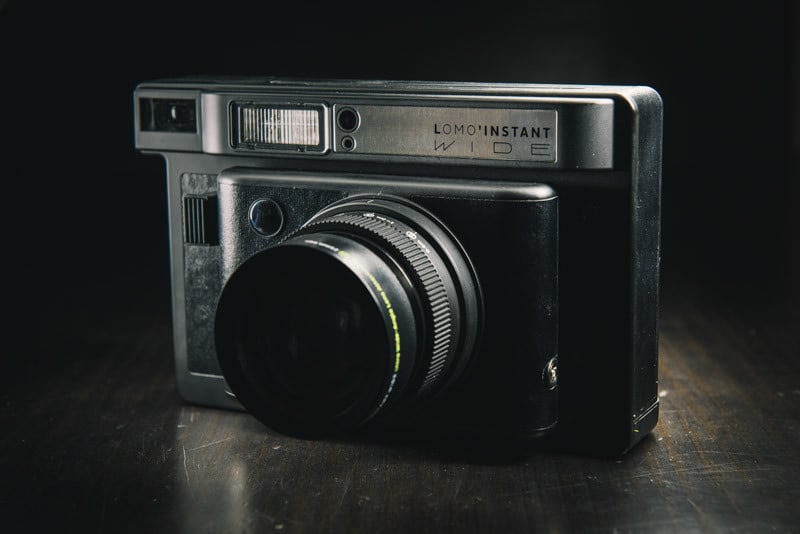 The Lomo’Instant Wide is an Instax wide format camera that opens the flood gates to an unprecedented level of creative Instax photography. Packed with more features than I can count, I immediately got to work snapping imaginative, fun, and downright hilarious photographs.

Photographs that, once the Lomo’Instant had spit them out, I could hold on to with my hands or even hand out to friends, family or strangers on the spot.

In fact, the photos were so hilarious and even risqué that there’s no way any of them will appear here. 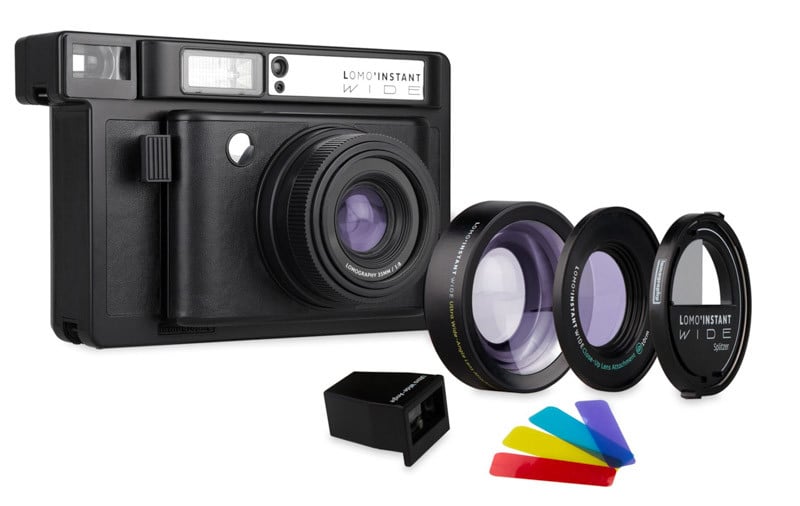 With so many potential combinations of the various modifiers offered by the Lomo’Instant Wide, I almost didn’t know where to begin when I first opened the box and held this whopping wide format camera.

“Whopping you say”, yeah it ain’t small. So let’s start there.

Body and Exterior: Form and Styling

The first thing that came to mind was how nice it felt in my hand, despite the fact that it’s left eyed and kind of big. The flat back and hard edges fit my average sized hands nicely, the bottom left corner of the body notching into the palm of my left hand as my fingers just reached the focus selector. 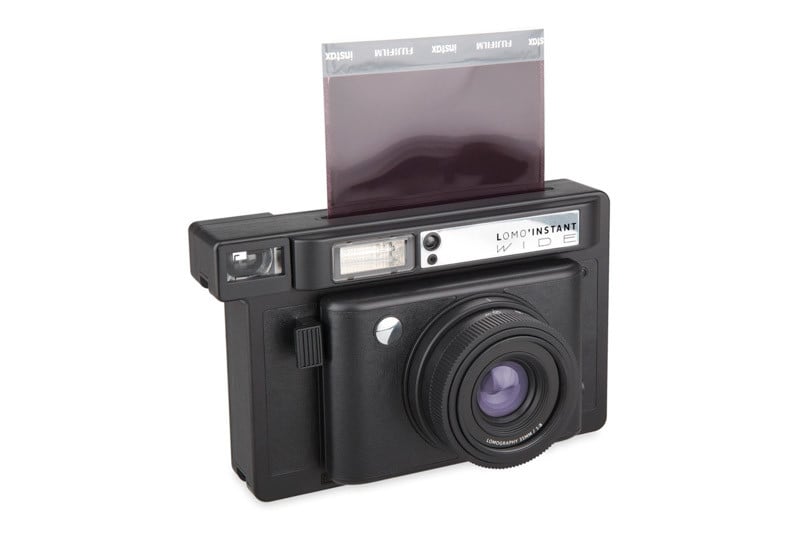 Harsh, yes, but I’m not being overly outlandish here.

Carrying it in a shoulder bag meant reserving the same amount of space as I would a Nikon D5 or similarly full grip DSLR.

And like those high-end professional workhorses, the Lomo’Instant Wide is not flimsy by any means. It’s probably capable of surviving a Fallout 4 style apocalypse, still making analog pictures of Dogmeat all the while. 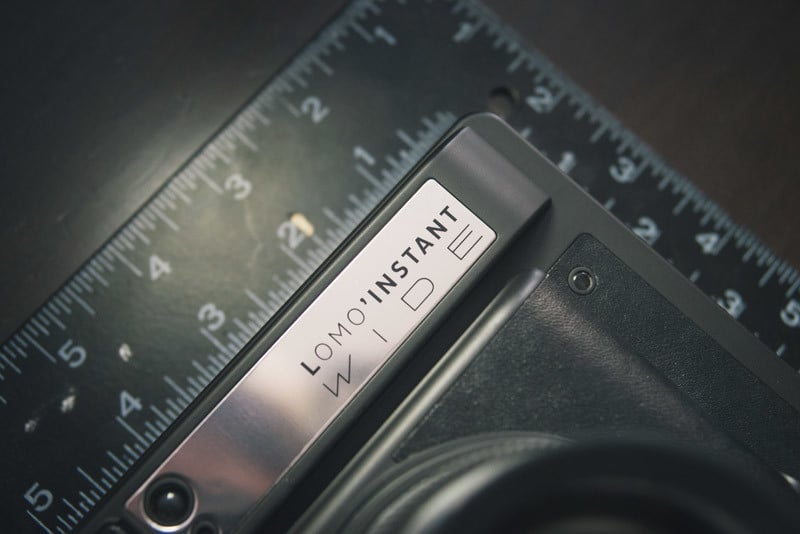 In the pictures the edges look smooth and rounded but in reality they’re darn near right-angles. So much so that I could literally use the camera as a L-Square to accurately measure and cut shelves.

I’m not meaning to contradict my earlier statement about its in-hand comfort, it was better than the quite shapely Fujifilm Instax 210. Because even though the 210 has a flowing, form fitting grip and voluptuous corners, it never quite settles into my hands like the Lomo’Instant Wide does. 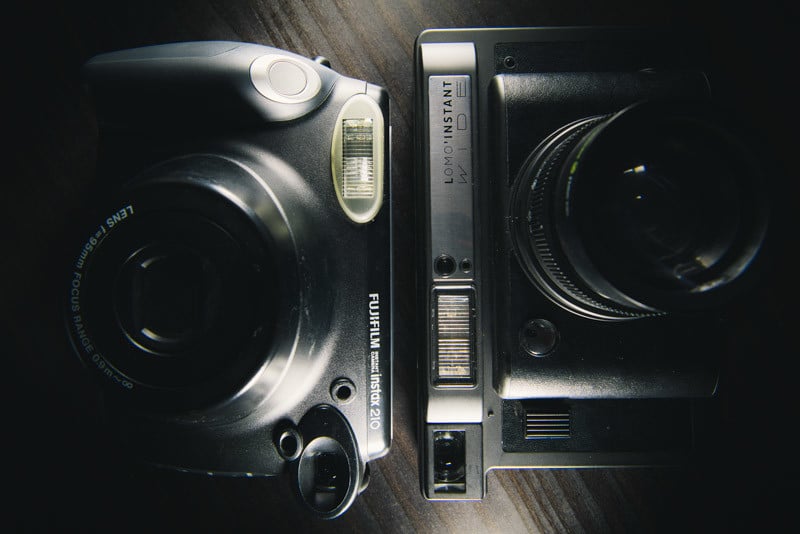 On the Fujifilm 210 my left bracing hand never knew where to grab on, always drifting along the side of the body, no clear place to put it. Whereas on the Lomo’Instant the 90° angles firmly notched into the palm of my left hand.

And it’s because of these tightly rounded corners that when comparing the two side by side I find the Lomo to be a much better looking, vintage styled Instax camera. Driving home these antique vibes is a shutter that appears to be lifted straight from a 1970s Kodak Instamatic X-45. 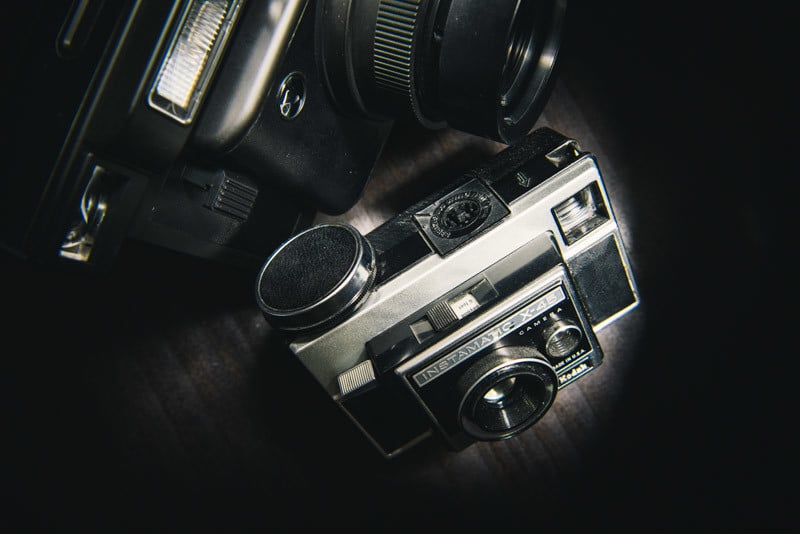 The rectangular looks of the Lomo’Instant Wide are brazen but they work for it. Some may say it’s more vintage than it ought to be but I really like it. 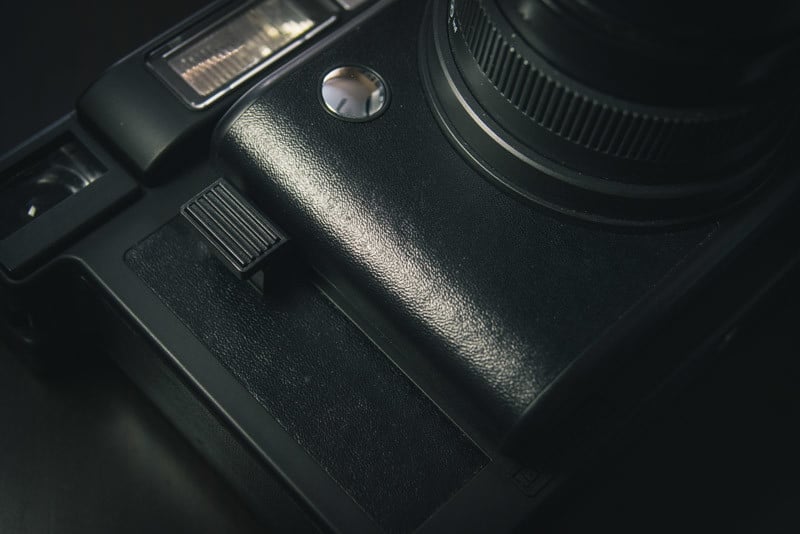 Depending on which one of the four models you buy — brown, green/blue, white or black — the camera, all plastic, will be wrapped in a faux leather textured tape that has a blasé feel about it.

Reminiscent of the aforementioned 1970s X-45, the textured leather isn’t horrible, but it isn’t exactly class A premium cowhide either.

For the price some may expect a little higher quality leather wrap but I think it’s satisfactory. Moreover it’s certainly better than hard plastic. 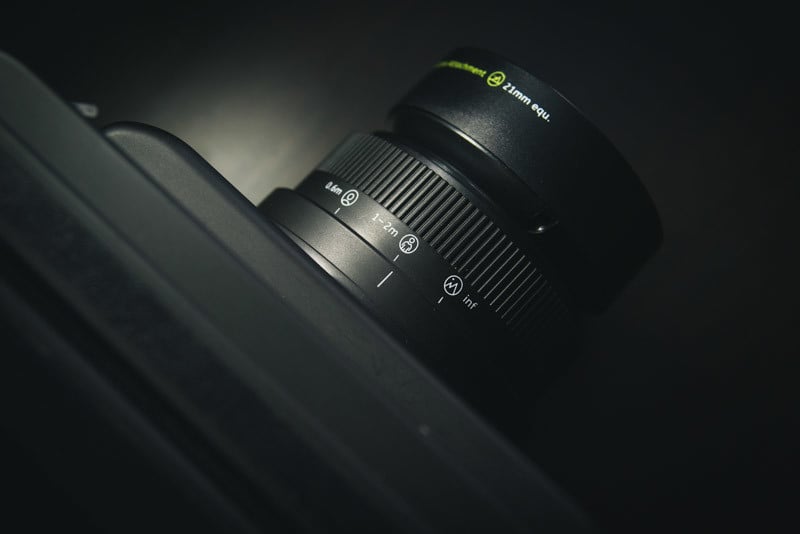 Back to the front, the focus selector is all that’s there and it’s the three basics: mountain, body and face. No aperture selection — just f/8, f/22 automatically — is kind of boring and on a camera that caters to the creative types is very disappointing.

Lomo’s own words are “the creative features of the Lomo’Instant Wide set it apart from any other instant camera on the market, past or present”. And I can confirm, leaving off one of the basics of photography definitely sets it apart. 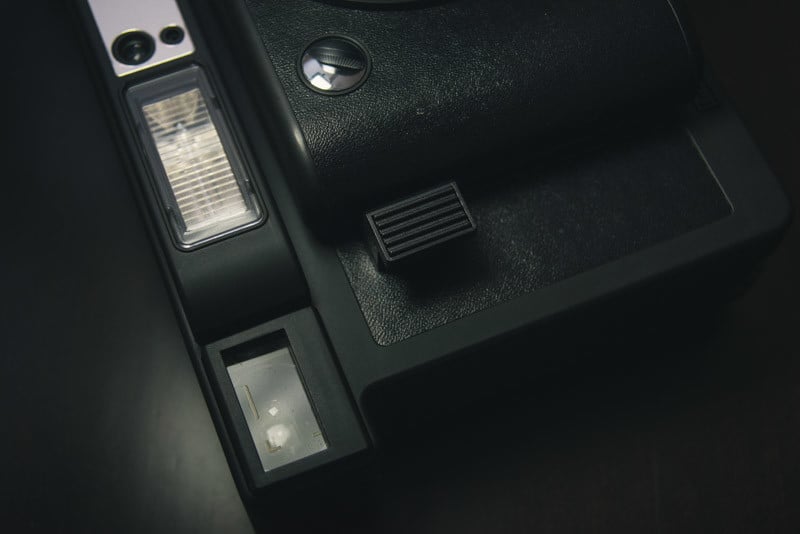 On a more positive note, I will say that I love the shutter release. It’s a large, rubber, hard to miss button that is perfectly placed. But be careful if you’re right-handed, as the shutter is very sensitive and picking this up as I would any other camera produced at least one out of focus picture of the floor for every cartridge of film.

What You Get and Why You Want It

While the body may be a non-starter for some, it isn’t really why you’re going to consider buying the Lomo’Instant Wide anyway. The key selling features of this kit are the adapter lenses and camera modes. 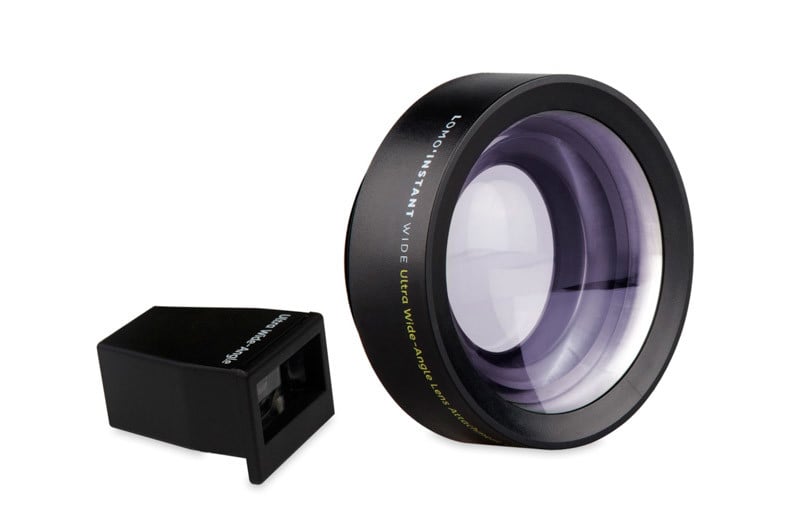 Unlike most Instax cameras the Lomo’Instant Wide gives you the ability to screw on a wide-angle lens, close up lens, and a splitzer — a feature that Lomo themselves are so happy about that they don’t even mention what it’s for on their product webpage. There’s flash gels and a lens cap that doubles as a wireless shutter release too. 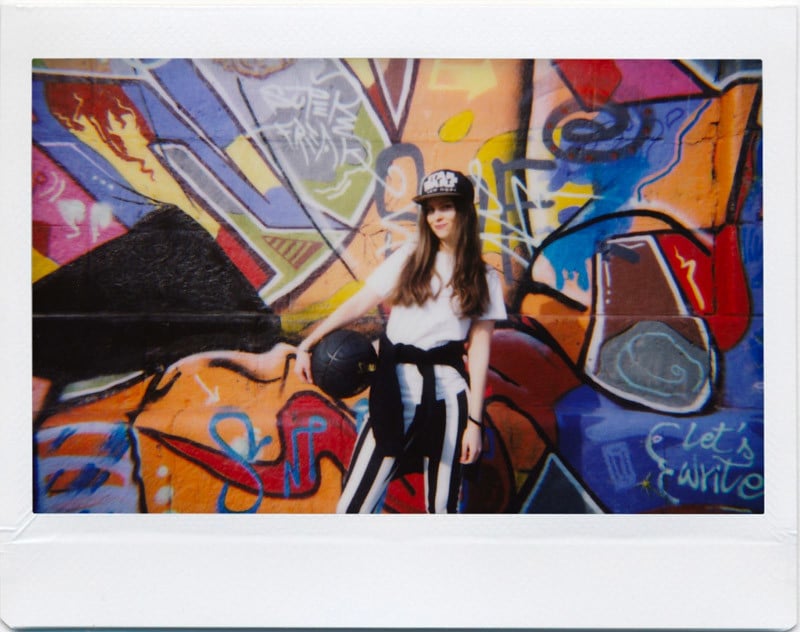 The built-in lens on the Lomo’Instant Wide is a 35mm lens that you can step-down to a much wider 21mm with the attachment lens. Personally, I left the 21mm adapter on full time. It’s light and small, adding next to nothing in overall camera size. There’s also a close up adapter you can use for macro photos.

I love wide-angle and if there’s one thing that has forever annoyed me with the other Instax cameras that I’ve used its been the field of view. This 21mm adapter is fun addition to an already fun type of photography. 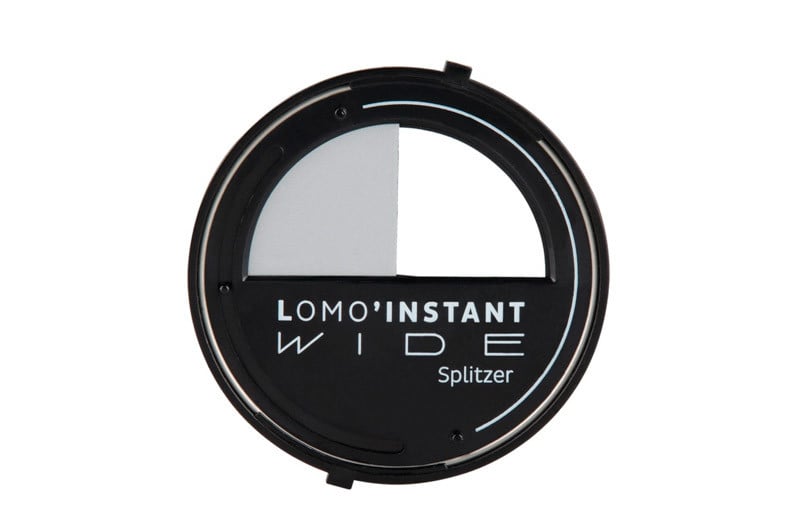 The Lomo’Instant Wide has bulb mode and a PC sync port too, excellent tools. Combining that with the ability to do multiple exposures and you’ll really be flexing those creative muscles. But while the plastic wide-angle lens is nice, it’s one more thing to keep track of in a long list of accessories, all just waiting to be lost in the bottom of your shoulder bag and eventually gone for good when one rolls out during a picnic in the park, forever lost. 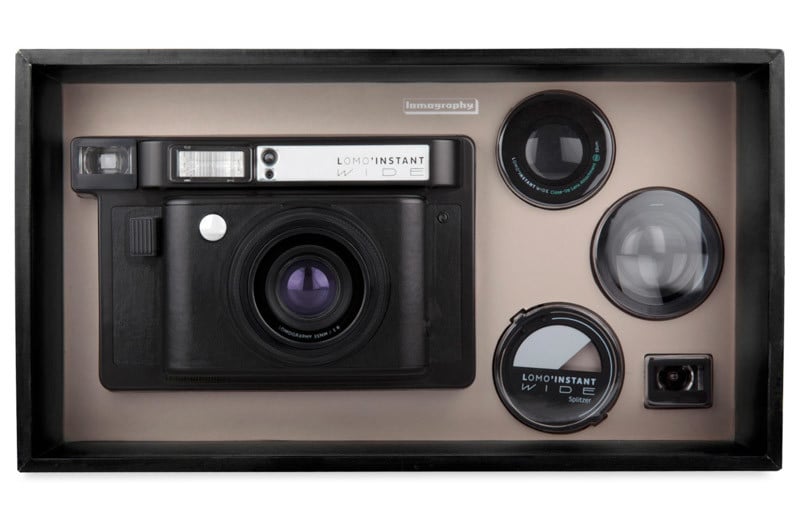 Now that I think about it, there’s so many loose parts to the Lomo’Instant Wide + Lenses that Lomography themselves forgot to send the wide-angle viewfinder to me for this review.

Given the generally lowish quality of Instax pictures, I’m certain this wide-angle couldn’t have been built into the camera and activated via a slide-in over the default lens, without any degradation to the picture quality.

With that said it’s important to note that IQ with any of the adapter lenses attached was consistent with using the default attached lens, with no degradation of quality at all.

The whole kit is going to be a lot of fun for a lot of people, myself included. When I look at a great Lomo’Instant Wide picture one thing comes to mind, “Sure wish I’d shot this on good film or digital, I’d love to put this on my wall.”

I know, I know, that isn’t the point, that isn’t what this camera is about. It’s about challenging yourself to do something different. Leave the even clunkier DSLR at home, learn a new craft, new skills, and form a new mindset that may help you in other ways when you do pick up that digital camera.

Does the Lomo’Instant Wide succeed? Well, it definitely challenges the wallet at $259 for the kit in Central Park (brown) and $239 in black. Price aside, it definitely succeeds in making me do something different, something that isn’t boring old digital “shoot it now, fix it later” photography.

There’s a lot to be said for film and especially Instax. Nothing in the digital world can compared to the feeling of taking a picture and immediately holding a physical copy of it in your own hands. And while you can get sleeker Wide Format Instax cameras, you can’t get them with the accessories the Lomo’Instant Wide has.

If you’re in the market for an Instax Wide format camera I think the Lomo’Instant Wide — primarily because of its accessories — has to be given strong consideration. That is unless you’re the type of person who frequently misplaces things. If that’s the case you may want to go another direction, assuming you’re going to lose all the extra fun parts.