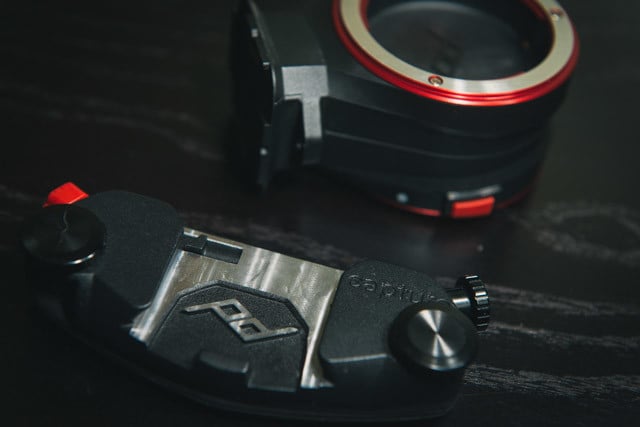 If there’s one area of photography that continuously plagues just about every photographer, it’s what to do with your lenses. Where and how to store them at home, how to pack them for airplane travel, how to keep them on your person when you’re actually shooting. The many questions and solutions grow tiresome after a while.

And if you’re anything like me, you slip on your well-thought out plans for workflow efficiency. I start out every photo gig with every lens cap attached. But because I don’t have time for lens caps while a bride and groom are standing under an umbrella on a chilly fall afternoon, I end every job with each of those lenses caps buried somewhere at the bottom of my bag.

It’s a fine line between functionality, versatility and speed. Too much of one and it can get in the way of the other. For just $89, the newly CaptureLENS from Peak Design attempts to walk that fine line between convenience, agility and utility. 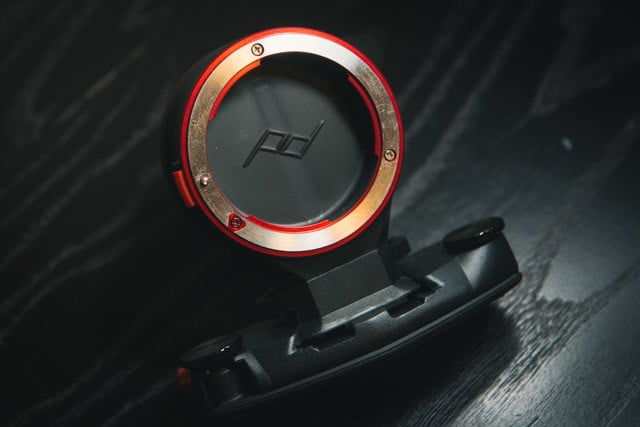 The dream of just about every photographer is having multiple assistants, all ready to take your unneeded lenses and bodies out of your hands. The CaptureLENS aims to become that little assistant hanging off your camera bag or belt, able to quickly and safely swap between lenses with just one hand.

This video from Peak Design may best show how the CaptureLENS works:

Available for Nikon’s F Mount,  Canon’s EF Mount and Sony’s E and FE Mounts the CaptureLENS can connect to any strap up to 3″ wide, which includes just about every strap or bag loop that I’ve ever seen. Or you can buy the Peak Design strap to attach the CaptureLENS to and tote your lens around that way. 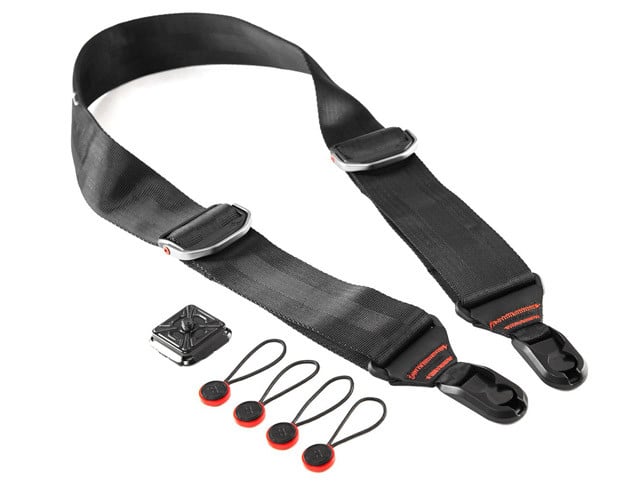 The CaptureLENS clip is very well built and never once wiggled lose while attached to my belt during multiple hockey games or on my f-stop gear Loka UL shoulder strap during an afternoon winter hike. 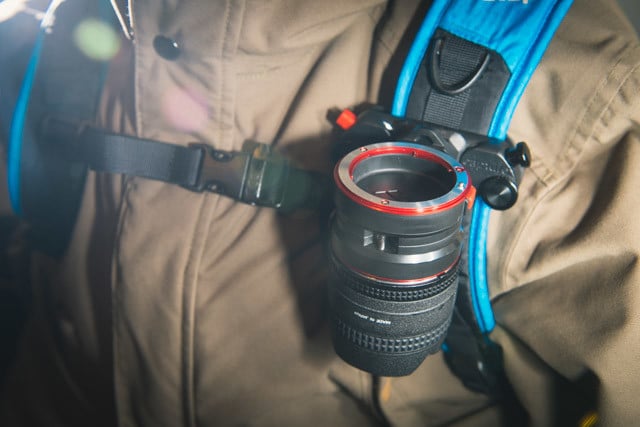 The weight of the CaptureLENS is good. The part that your lens will attach to is very light, almost feeling too light at first glance, but it’s solid, including both metal and plastic components. The plastic components feel cheap, no other way to put it, but I’m happy this portion isn’t too heavy, it doesn’t need to be. The mount is only grabbing the lens and holding it, and those parts are metal, the same as your camera’s mount. There is a release button for both the lenses and your lens mount to the clip itself (the two red buttons you see below).

On the topic of the mount, when hiking with one lens attached as above, the top mount, left open, became a literal cup for all the dirt and water I would pass through during a hike in the woods. Obviously I could stick a lens cap on this but, that kind of defeats the purpose. 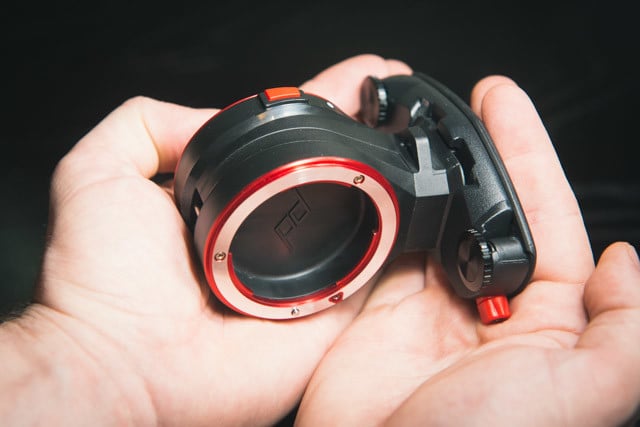 In contrast to the mount, the clip itself, which would attach to your bag, is kind of weighty. All metal, with a few dials to control tension on both the attachment point to your belt and also the lens mount into the clip.

The build quality is very pleasing and somewhat unexpected given the price point of just $89. My lenses attached firmly and felt very secure in the clip, which itself felt 100% secure on my belt or bag loop. 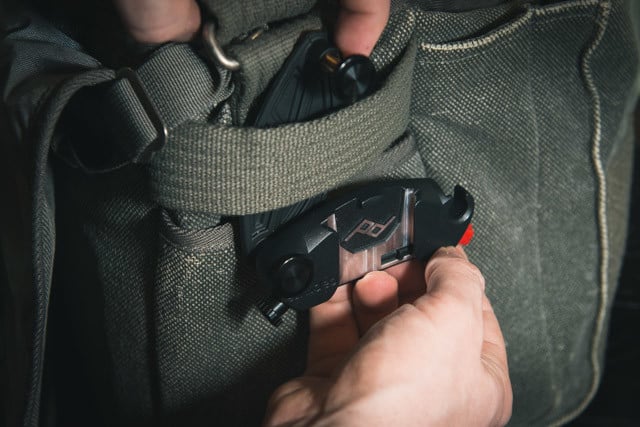 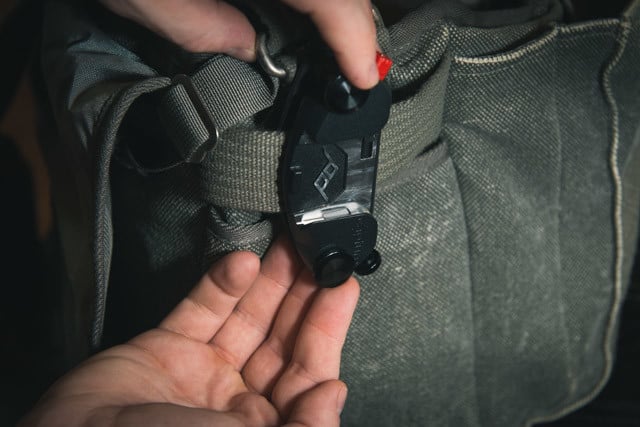 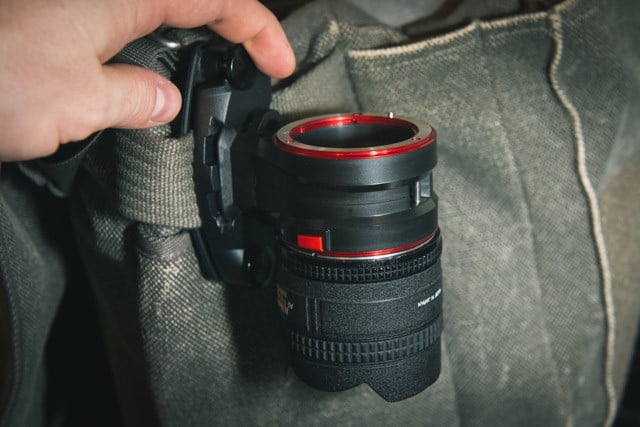 During hockey games I was using the CaptureLENS on my belt with the Nikon 16mm Fisheye attached, swapping it with my 24-70 on my second body. Previously I’d use a fanny pack or larger waist pack to accomplish this, but it simply wasn’t as fast and it was also much, much more bulkier.

I had some initial reservations about the safety of my lenses when attached to the CaptureLENS on my belt but they were quickly dashed after wading through thick crowds on the main level of the rink, taking bump after bump and not once becoming even slightly loose.

But it wasn’t all perfection. In terms of comfort when using the CaptureLENS it doesn’t pass with flying colors. When standing, sure the belt clip is great but as soon as I sat down it had to be readjusted. When hiking the CaptureLENS on my shoulder strap was great but every time I took my backpack off, the strap being unsupported, led to my lens cracking off the ground a couple times.

Obviously this is a fancy solution for two super glued lens caps. Which may work for super light primes but lens caps are not stress tested to support the weight of a lens in that manner. Not enough super glue between your two lens caps and your 85mm winds up on the floor.

Photography oriented do-dads in the $50 to $100 range are a dime a dozen. If you’ve been your official family photographer for any amount of time you probably have every photography gift under the sun: thermoses, flasks, paper weights, beer, stress balls, magnets… the list goes on. Most of it — as we’d all probably agree — is kind of useless “stuff” that few of us need more of.

But here is a relatively inexpensive ($89) doodad that actually does something worthwhile. Even if you don’t explore all the potential usages for the CaptureLENS and only attach it to the loop on your camera bag — as I will do — it will surely come in handy on a regular basis.

Editor’s note: This is actually the second review we’ve done on the CaptureLENS — Michael Archambault reviewed it in September 2015 — due to a mix up behind-the-scenes. Instead of discarding this second review, we’ve decided to publish it as a second opinion by a different reviewer. Apologies for the redundancy.

12 Photographers Shot Portraits in the Same Room, and This is What Resulted