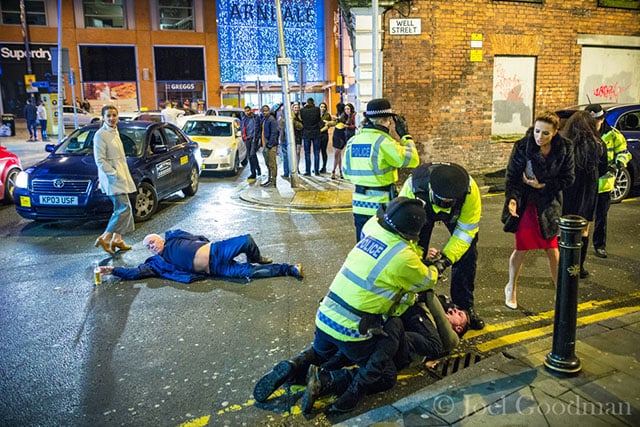 Photographer Joel Goodman was photographing revelers in Manchester on New Year’s Eve when he came across a strange scene: police were wrestling a man on the ground while another man was reclining on the street and reaching for his beer.

Goodman’s resulting photo has gone wildly viral online, and many are referring to it as a “perfect composition” and a photo that’s reminiscent of a Renaissance masterpiece painting.

After the photo was published in a slideshow on Manchester Evening News on January 1st, BBC producer Roland Hughes brought the photo to the world’s attention with a Tweet:

So much going on this pic of New Year in Manchester by the Evening News. Like a beautiful painting. pic.twitter.com/szKKRM4U4i

The Tweet soon amassed tens of thousands of views and Retweets as people weighed in on the shot. It was picked up by The Guardian, and Twitter even decided to feature the post. People soon pointed out that the golden ratio applies well to this photo:

Thanks to @GroenMNG for proving the golden ratio can be applied to this pic: pic.twitter.com/Fa1EYSV6ih

Others noticed the “beer man’s” similarities with the pose of God in “The Creation of Adam”:

There has since been all kinds of strange remixes to the photo:

@hughesroland @ajlanghorn I had a go at turning it into a watercolour with Waterlogue pic.twitter.com/MmbiZ0SsD3

Hughes has since published an article on BBC News about how he helped the photo go viral, sparking a new meme. Goodman says he’s “flattered” by the attention his photo has received after working to document UK nightlife for a few years now.

He’s selling prints of this shot through his Photoshelter page. You can also find more of his work on his website and connect with him through Twitter at @pixel8foto.

Image credits: Photograph by Joel Goodman and used with permission

‘Size Matters’: A Short Film About Two Photographers Wooing a Gal with Their Gear