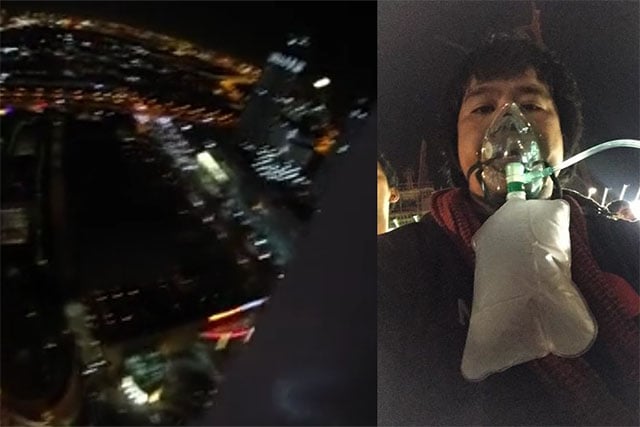 One of the big stories this past New Year’s Eve was the major fire that broke out at the 63-story Address Downtown Dubai hotel, which sits next to the Burj Khalifa, the world’s tallest building.

37-year-old photojournalist Dennis Mallari was one of the many people in the hotel when the blaze started. He found himself trapped on the 48th floor, where he had planned to shoot the city’s firework displays at midnight.

CNN reports that the fire started on the 20th floor and quickly flooded many of the floors above with smoke, preventing Mallari from leaving the building through ordinary exits.

Sorry for the announcement. Happy New Year to all.

After nearly 2 hours in the burning building, Mallari decided to go through with his last resort plan for staying alive: rappelling down the side of the giant building. And as a photojournalist, Mallari documented the whole thing with a GoPro camera, holding the cable with his left hand and shooting photos and videos with his right:

As he was hanging off the edge, firefighters got onto his floor, found him, and saved his life by providing him with oxygen and leading him down the smoke-filled stairwell:

Once he was safely out of the hotel, Mallari posted a selfie on Facebook to let everyone know he was okay:

He then got back to work, shooting the fireworks show just a short distance away from the building he had just narrowly escaped from.

Behind the Scenes: Choosing the Winners of the 2015 National Geographic Photo Contest

Ep. 35: Another Photographer Dies While Rooftopping – and more