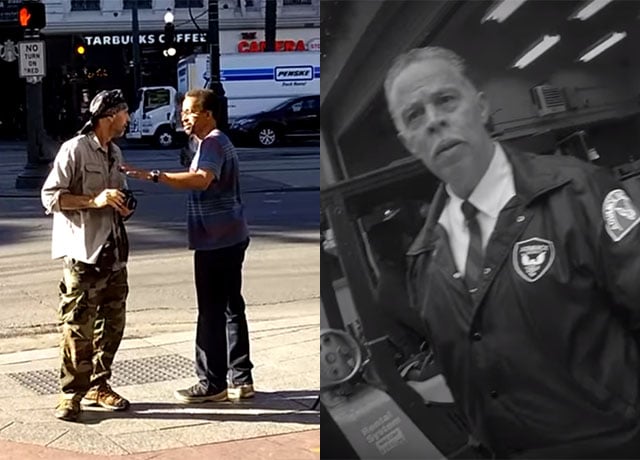 Street photographers Chuck Jines and Keenan Hastings both uploaded videos this week showing confrontations they had while shooting on the street — Jines in New Orleans and Hastings in Detroit. They both came across strangers who didn’t appreciate their photo being made, but Jines and Hastings had two very different ways of dealing with the situation.

Warning: There is some very strong language thrown around in both videos.

Jines was shooting at an intersection for an educational video when one of his subjects said he didn’t want a photo taken. As the man walks away, Jines says “thanks for the photo,” and the situation escalates from there:

Hastings came across a security guard on the other side of a window and decided to make a picture. The guard didn’t appreciate seeing a camera pointed at him, and came out to aggressively confront (and threaten) Hastings. Hastings’ strategy is to be apologetic and walk away from the situation.

“While shooting street, this is probably the worse of all outcomes… which isn’t so bad,” Hastings tells PetaPixel.

This is a Norwegian Camera Shop’s Christmas Photo

The Time-Consuming Work of Shooting a Stop-Motion Commercial