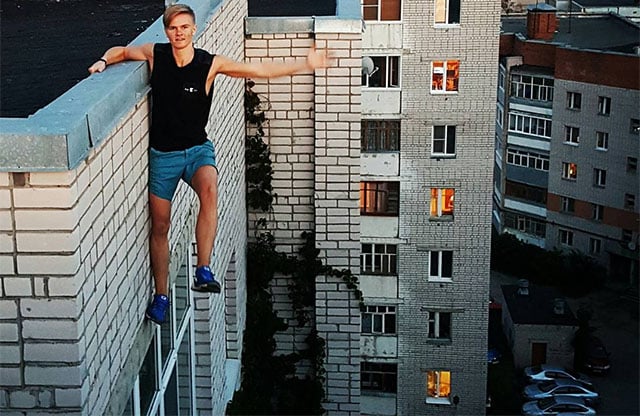 A 17-year-old boy in Russia has died after falling 9 stories from a rooftop while engaging in extremely dangerous “rooftopping photography.” The goal of the stunt was another eye-catching photo for his Instagram account.


The International Business Times reports that the boy, identified only as Andrey R., has regularly climbed high rooftops with friends in the city of Vologda, Russia. For his final photo attempt, Andrey was reportedly hanging off the edge of the roof while attached to a rope in order to shoot a photo that made it look like was falling. The rope snapped, Andrey did fall, and he was pronounced dead two hours later in the hospital.

Young daredevils in Russia have attracted a lot of attention on the Internet over the past several years for their vertigo-inducing rooftopping portraits. After climbing the highest structures in their cities, generally without safety devices, they pose for portraits while standing, sitting, or hanging just inches from certain death.

Back in 2012, a man died during a rooftopping photography adventure when he fell into a building’s giant chimney. People are also engaging in increasingly risky behavior in order to capture the perfect selfie. Back in September, we reported that selfies now cause more deaths than shark attacks.

This latest tragedy is precisely why Russia unveiled a national “Safe Selfie” campaign back in July, which warns specifically against taking dangerous pictures from rooftops.