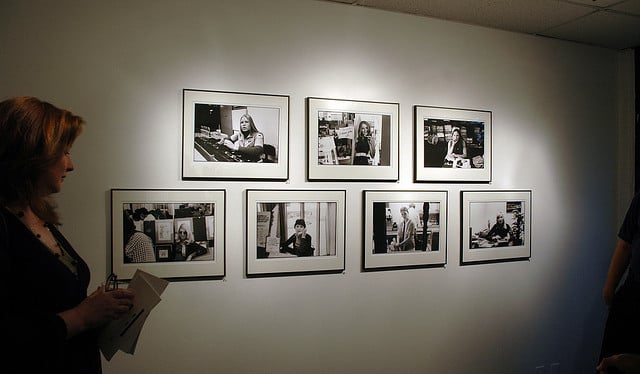 Does photography deserve a place in art galleries? Jonathan Jones doesn’t think so. The Guardian art columnist has caused quite a stir after writing a piece titled, “Flat, soulless and stupid: why photographs don’t work in art galleries.”

While Jones acknowledges that photographs can be “powerful, beautiful, and capture the immediacy of a moment like nothing else,” he argues that they are, “poor art when hung on a wall like paintings.”

They’re simply a “flat, soulless, superficial substitute for painting,” he says, and it looks stupid when we hang it like a painting and try to give it as much attention as a painting.

Paintings are made with time and difficulty, material complexity, textural depth, talent and craft, imagination and “mindfulness”. A good painting is a rich and vigorous thing. A photograph, however well lit, however cleverly set it up, only has one layer of content. It is all there on the surface. You see it, you’ve got it.

As you might expect, photographers and fans of photography are up in arms over Jones’ views. The comment section has received hundreds of responses, with people debating on both sides of the aisle. Here are some of the most ‘upvoted’ ones:

Photography and paintings are definitely not the same but a good picture takes as much skill, time and practice to take as a painting to create. Each has their pros and cons and I would never pretend a photo gallery is Rembrandt but could still enjoy what it provides. That said, not every painter (or photographer for that matter) is equally talented. —Gloria Colom

Contemporary photography is an established medium in its own right and there is no reason that it should not been viewed in a contemporary gallery. No, it’s not like painting. Painting evolves over time while a photo is taken in a split second. Both require knowledge and skill. Both can be valuable documents. There are great paintings and bad photos just as there are great photos and bad paintings. They perform different functions. By making a comparison between them you do both a disservice. —David Fox

It’s very clear to me that you didn’t see Cartier-Bresson at the Pomidou Centre this year. What an odd article. Didn’t the world have this debate in the 50s and 60s, where it became clear your theory is utterly wrong? —Anonymous

I’m sorry but this rather dated view of both art and photography should never have found its way into was is usually a progressive and forward thinking newspaper. I’m not going to dignify it with any more comment but I would suggest that the author should buy himself a calendar to remind himself what century we are in. —Lonewalker33

Some commenters weren’t as kind with their words:

Bullsh*t clickbait article designed to annoy so people will comment so it can worm its way into my news feed. Weak as piss, no actual content of any worth. —Kim Appleby

Unfortunately, the Guardian piece didn’t include a poll to quantify the opinion of its readers. Here’s one, though, just for kicks: