Tice Ledbetter was flying his DJI camera drone over a pier at Pacific Beach in San Diego this week when something bizarre happened: a fisherman on the pier noticed his drone, cast his fishing line at it, and hooked the quadcopter right below one of the propellers. The whole thing was captured by the drone in the video above. 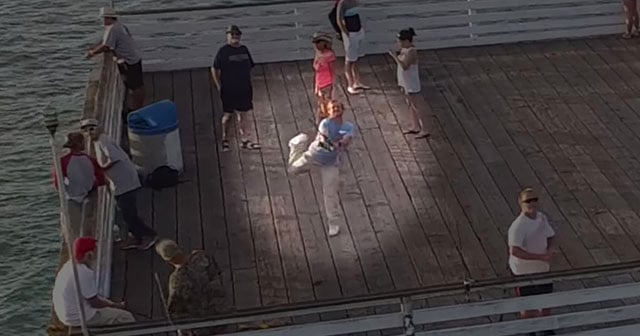 In addition to posting the video on YouTube, where it has been racking up a large number of views, Ledbetter also turned to Facebook to express his bewilderment at what happened.

I flew half a mile with this

Luckily for Ledbetter, even though the drone had quite a bit of fishing line wrapped around it, the fisherman let the drone fly away rather than pull it down into the Pacific Ocean. He managed to fly the drone another half mile to safety.

We’ve heard a number of stories now of people knocking drones out of the sky by shooting them down with guns, but catching one with a fishing pole is a new one for us.

(via Tice Ledbetter via Laughing Squid)