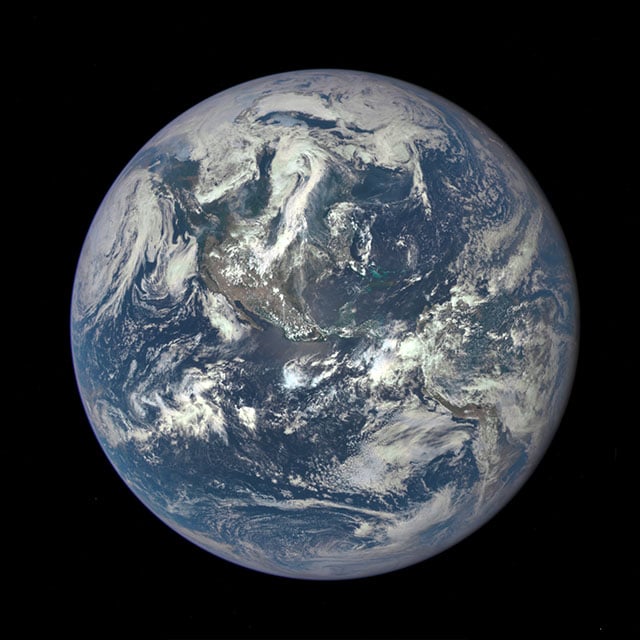 NASA’s new Deep Space Climate Observatory Satellite (DSCOVR) has captured its first photo (shown above) of our planet from one million miles away. By comparison, the similar and iconic Blue Marble photo captured by the crew of the Apollo 17 was just 28,000 miles away when that picture was snapped in 1972.

At a distance of 1 million miles, every picture captured by DSCOVR actually shows what happened on Earth 5 seconds in the past, since that’s how long it takes light to travel from Earth to the camera.

That camera is the Earth Polychromatic Imaging Camera (EPIC), which packs a four-megapixel CCD sensor and an 11.8-inch telescope lens with a field of view of 0.61º. The sensor is black-and-white, and there are 10 different filters that can be rotated into position depending on the desired wavelength of light.

“The color images of Earth from NASA’s EPIC are generated by combining three separate images to create a photographic-quality image,” NASA writes. “The camera takes a series of 10 images using different narrowband filters — from ultraviolet to near infrared — to produce a variety of science products. The red, green and blue channel images are used in these Earth images.”

DSCOVR is at the special Sun-Earth L1 Lagrangian point, which ensures that it will always stay between Earth and the Sun. This means the EPIC camera will be pointed at the sunny side of Earth at all times.

The purpose of DSCOVR is to monitor solar wind for space weather alerts and forecasts. Once all systems are in full gear, DSCOVR will be snapping photos of the entire planet every two hours. Starting in September 2015, the photos will be regularly posted to an online gallery dedicated to the shots.

Rhinos Get Camera Implants in Their Horns to Fight Against Poachers

A Brief Review of the Venus KX800 Macro Twin Flash