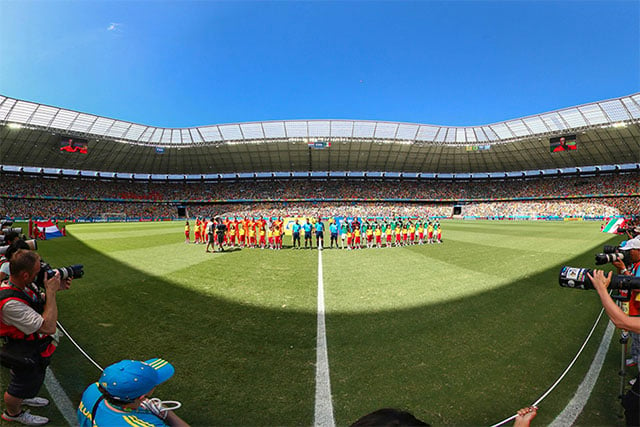 Getty Images has been known for its premium stock photography and video catalog. Now, with the birth of a major medium on the horizon, the company is looking to get into the virtual reality space. A new application, 360-Degree View by Getty, will give users a chance to experience their favorite moments as if they were there. Best of all, the application is available now on the Oculus Store.

The 360-Degree View app by Getty features exclusive high-quality 360-degree imagery from a variety of places including the Cannes Film Festival and the 2014 FIFA World Cup. Getty has noted that the company will continue to add new imagery and continue “transporting viewers into the heart of the action, from the red carpet of the world’s glitziest events to the playing grounds of sports’ major games and exotic locations from around the world.”

Getty Images’ Vice-President of Editorial Content, Hugh Pinney, noted that the company “has always been at the forefront of innovation, employing the latest, cutting-edge technologies to bring our customers best-in-class imagery from the world’s top creative minds and global events as they happen.” He added that Getty is “thrilled to be working with Oculus to offer a truly immersive and social experience.”

The images are captured by professional photographers and Getty is touting that they have “unrivaled 360-degree imagery” that will help to “fuel the next generation of virtual reality experiences.” The company has been capturing 360-degree imagery since 2012 and has already covered some events including the Oscars, the Summer and Winter Olympics, and the Cricket World Cup.

If you currently own a Samsung Gear VR headset, then you can download and try out the experience today. Otherwise, the application will be available early next year for the consumer version of Oculus Rift.

Man Wins Lawsuit Against Neighbor Who Shot Down Drone with Shotgun