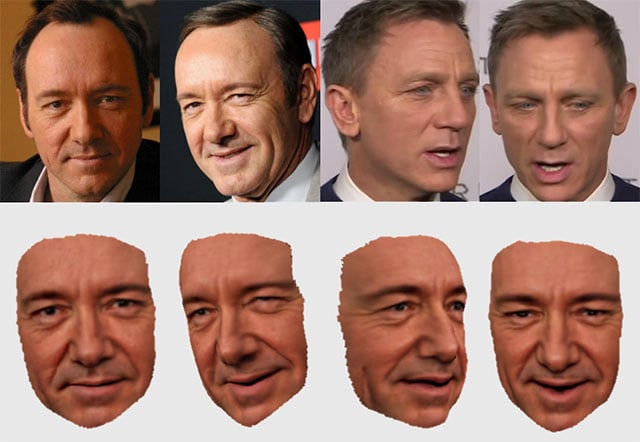 Celebrities now have another reason to shy away from paparazzi photographers. Scientists have created a new technique for creating controllable digital versions of celebrities using only a set of paparazzi photos to reconstruct faces and create convincing expressions.

The system, developed by researchers at the University of Washington, uses a collection of candid photos to recreate faces rather than fancy camera rigs or laser scans. Once the face is extracted from the photos, it can be controlled like a puppet and made to mimic the movements and expressions of someone else found in a separate video.

Here’s a demo video by the scientists that shows various famous faces created from photos and matched to video footage of other people talking:

So in the future, it may be easy to create a convincing CGI version of anyone saying anything you want using a collection of photos and a video. It’ll be interesting to see what kind of applications emerge once this type of technology arrives in the hands of the general public.

(via UW via Engadget)

Counterfeit Memory Card Sellers Are Sometimes the Ones Getting Scammed