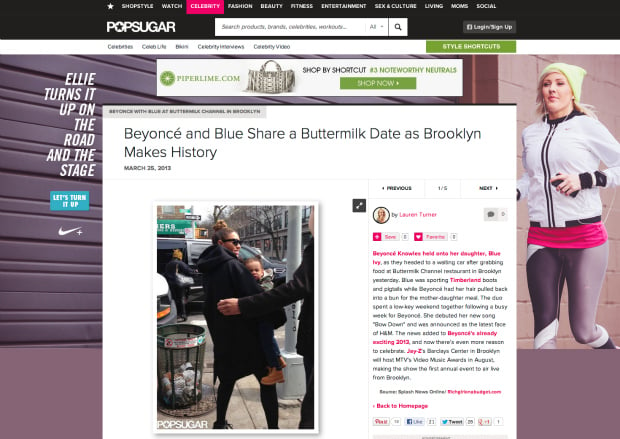 In recent years, photographers — and particularly photojournalists — have had to compete more and more aggressively with the everyday Joe and his smartphone who happens to be at the right place at the right time. And with technologies like CrowdOptic in the works that will help sift through the plethora of photographs taken every second, news agencies may soon be able to find that Joe in record time.

But according to an article by Jenna Wortham of The New York Times, one branch of photography is already taking a significant hit: the paparazzi are being replaced by Instagrammers. Using a recent photo of Beyoncé and her daughter as an example, Wortham shows how the paparazzi are already losing their battler with those same amateurs.

The photo in question was taken by Instagram user Raquel Sabz in Brooklyn. And after it made the necessary social networking rounds, it was purchased from Sabz by Splash News and sold to several outlets including People, PopSugar, New York Daily News and The Huffington Post.

This particular photo, however, is just one of many that are acquired the same way every day. As Senior Editor at PopSugar Molly Goodson put it:

The average person has eyes in places where regular paparazzi don’t have them. The whole world becomes a photo agency at that point. More so than ever before.

From the Oscars to everyday candids like the aforementioned Beyoncé photo, agencies and news outlets are finding it easier and easier to acquire their content from the pages of social networks and photo sharing apps. As a consequence, Paparazzi are not only being replaced, their photos are being devalued. As Goodson told the NYT, in a hyper-connected world where everyone is carrying a camera, a celebrity sighting just isn’t worth what it used to be:

Before, the asking price for photos could stretch into the hundreds of thousands, depending on the rarity of the sighting. But now, because most people see them first on sites like Tumblr, Instagram, Twitter and Facebook, it’s harder to command a hefty price tag. Photos can go for a fraction of their historically high cost. It’s certainly devalued by the fact that it’s already out there.

What this means for the paparazzi and photography as a whole is up for debate. Alyssa Rosenberg of Slate laments the death of “gracious encounters between celebrities and the people who love them” now that every photo is for sale. Derrick Harris of GigaOM wonders how privacy laws will have to change now that everyone’s a paparazzo, but not everyone’s a celebrity. What’s your concern?

Instagram and the New Era of Paparazzi [The New York Times]

Review: The Ona Leather Brixton is a Bag That Won’t Cramp Your Fashion Style

Brewery Puts Together Stop Motion Tour of Brooklyn in 3,000 Photos