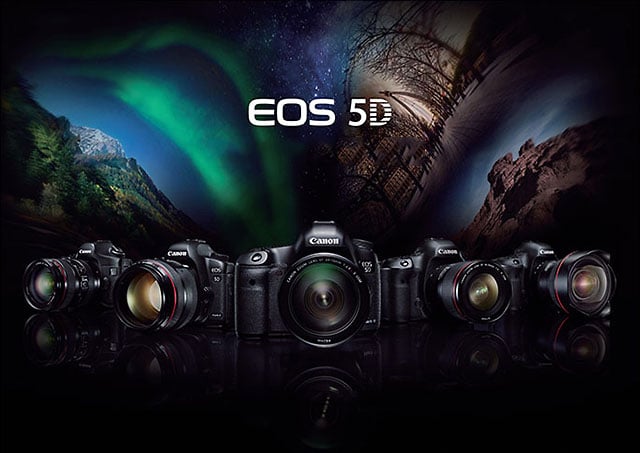 In the world of photography, every once in a while an anniversary comes around that is worth recognizing. Today, Canon is celebrating the ten-year anniversary of its EOS 5D camera line, which was originally announced on August 22nd, 2005. The original 5D represented a significant evolution in the digital photography market by lowering the bar of entry for photographers interested in full-frame DSLR cameras.

When the EOS 5D was announced in 2005 with its 12.8 MP full-frame sensor, standard-sized body, and low price point (at the time) of $3,300, it was all but guaranteed to shake things up. Traditional full-frame cameras at the time were bulky and included built-in grip units, such as the one seen on Canon’s current EOS-1D X. The closest camera to compete with the EOS 5D was Canon’s own 1DS Mark II, but it cost more than double the price. The May 2010 episode of House, entitled “Help Me”, was captured completely on Canon 5D Mark II equipment. Other films noted to have used the 5D Mark II include Marvel’s The Avengers, Dimensions, Department, ParaNorman, and Escape from Tomorrow.

The next Canon EOS 5D was the “Mark III”. The release included an upgraded 22 MP sensor, higher ISO capabilities, almost double the number of autofocus zones, and six frames per second continuous shooting. The 5D Mark III continues Canon’s legacy of image and video processing with the latest DiGIC 5+ chip, and is currently still available for $2,499.

The latest creation from the EOS 5D line is the 5Ds, which includes a jaw-dropping 51 MP full-frame sensor for those who are truly looking to go the distance. The Canon EOS 5Ds will be available this June starting at $3,700.

The EOS 5D has continued to be a significant lineup of cameras since its birth in 2005. From placing more affordable full-frame DSLRs into consumer’s hands to developing a sensor worthy of Hollywood video capture, the EOS 5D has made a lasting mark on the history of digital photography.