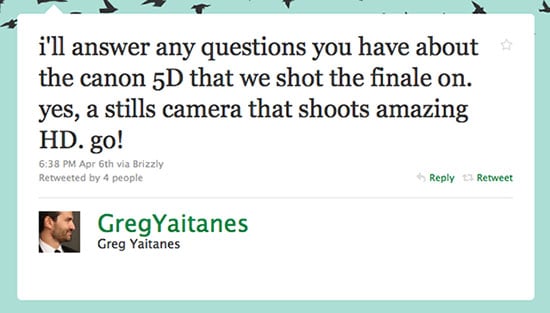 The season finale of the popular TV show House, which will air on May 17th, was filmed entirely with the Canon 5D Mark II. cinema5D overheard the plan last month and Greg Yaitanes, the director of the show, has confirmed it through a tweet in which we made himself open to questions.

We’ll republish some of the interesting questions and answers here, interview style:

@MVRamunno: What is the difference in how it looks on a TV screen compared to a regular camera?

GY: 24p and wanted it for ease of use in tight spaces.

@unikissa: Ok, seriously. Can you tell us something about the lenses you used?

@sarabury: Did you have to change any of your working practices to fit in with differences between the 5D and a typical setup?

GY: some. focus was hard with these lenses but more “cine-style” lenses are being made as we speak.

@marykir: were you using CF cards for storage or some sort of mass storage mod? seems like you would need a lot of cards :)

GY: some 18gb or something like that card. gave us 22 min of footage.

@Drdiagnostic: How was the quality as compared 2 the traditional camera used in shooting?

GY: i loved it and feel it’s the future. cameras that can give you these looks

@klizma: How did you manage to stabilize the camera in tight spaces? Any special kind of brackets?

GY: no. mostly gave it a hand held feel. or on a small tripod

This is quite an endorsement for Canon, with a network giant entrusting the finale of one of its most popular shows to the 5D Mark II (which happens to be the first digital camera to take the Presidential portrait as well).

Here’s what Wikipedia has to say about the popularity of the show:

In 2008, House was distributed in a total of 66 countries. With an audience of over 81.8 million worldwide, it was the most watched television show on the globe and far surpassed the viewership figures of the leading TV dramas the previous two years

If you haven’t yet, check out the short film, The Last 3 Minutes, which we posted earlier today. It was filmed with the same camera.