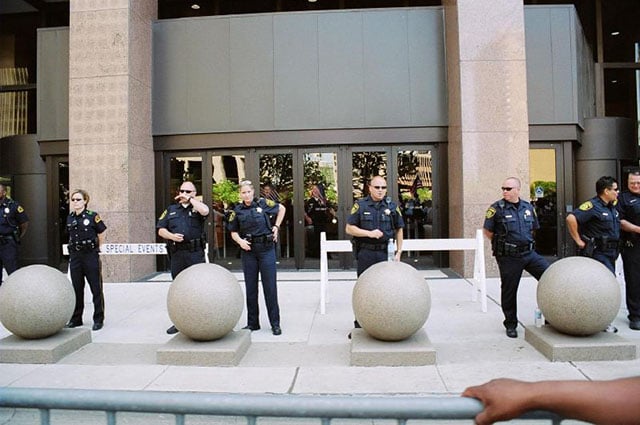 The Dallas Police Department has officially released a new general order that’s meant to inform officers on photographers’ rights. The document, titled “Public Recording of Official Acts,” warns officers that they cannot interfere with a person photographing or filming their activities as long as the recording is being done in an appropriate way.

As you may remember, photographers rights in Texas were threatened earlier this year when a lawmaker introduced a bill to criminalize the photographing of police from within 25 feet away. Public outcry — and death threats — ensued, and the bill was dropped a month later.

Now the Dallas Police Department wants to make sure its officers know official policies regarding photography. After earlier drafting a detailed four-page document, the final published policy was condensed into a single page.

…and here’s the one page policy that was just published:

A summary of the policy is found at the bottom:

As a result, officers must understand any bystander has a right to photograph and/or video/audio record the enforcement actions of any police officer so long as the bystander’s actions do not interrupt, disrupt, impede or otherwise interfere with a peace officer while the peace officer is performing a duty or exercising authority imposed or granted by law.

While an official published policy may be encouraging news for photographers, some aren’t happy that many of the details found in the original draft were tossed. The Dallas Observer calls the rules “seriously watered down.” Photographer Is Not a Crime labeled it “pathetic.”

NPPA general counsel Mickey Osterreicher tells the Dallas Observer that the document may be worse than not having a document at all.

“I’m extremely disappointed in the general order that they actually released, which is one page and, unfortunately, I think will not provide officers with the direction that they need nor explain to them why both citizens and journalists have the right to photograph,” he says. “You can’t discipline an officer without a policy. Based on this policy I don’t see where, no matter what an officer does, that there would be any discipline at all that would stick.”

Assistant Chief Brigitte Gassaway of the Dallas PD disagrees. “We don’t consider it to be vague. We consider it to be very clear,” she tells The Dallas Morning News. “The bottom line is that the public has a right to video-record us, and we expect our officers to be professional.”