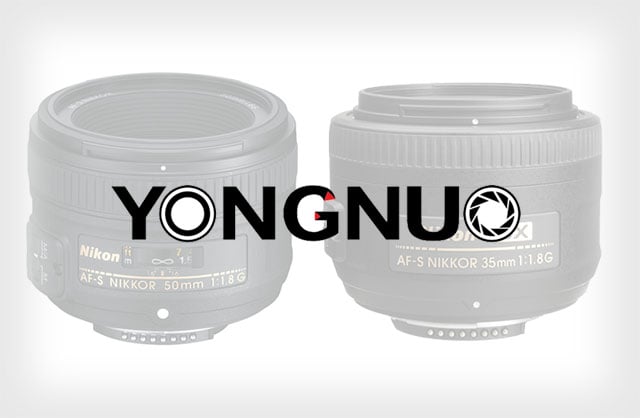 Last year we reported that Yongnuo is planning to expand its third party lens lineup to include Nikon lenses by the end of 2015. If you’ve been eagerly waiting to get your hands on a cheap (and possibly look-alike) Nikon lens, your wait will soon be over. The company is planning to launch 50mm and 35mm lenses for Nikon cameras in the coming months.

Yongnuo tells PetaPixel that it’s aiming to release a 50mm f/1.8 prime lens for Nikon cameras in July 2015, followed by a 35mm f/2 lens for Nikon DSLRs in October 2015. Another lens may be unveiled in December 2015. No word yet on pricing or specs — we may have to wait until the lenses are officially out to get those details.

Yongnuo has so far focused on simple prime lenses that have fewer elements and moving components, and the Canon clone lenses released up to this point have gotten pretty decent reviews. The company has so far been mum regarding whether it will try its hand at creating/cloning a zoom lens, but we’re guessing additional prime focal lengths will be filled in for Canon and Nikon before that ever happens.

From the Streets to the Gym: Photographing ex-Gang Members Lifting Weights