New York-based photographer and instructor Lindsay Adler recently collaborated with cinemagraph software maker Flixel to create a set of three stylized wedding portraits to show off at the upcoming WPPI conference. The behind-the-scenes video above offers a quick introduction to the project.


Alder shot 4K footage with the Panasonic Lumix GH4 and used Flixel Cinemagraph Pro to turn the video into still photos with touches of movement. Here are the three cinemagraphs she created and a glimpse at how they were made:

“Floating in a Dream” 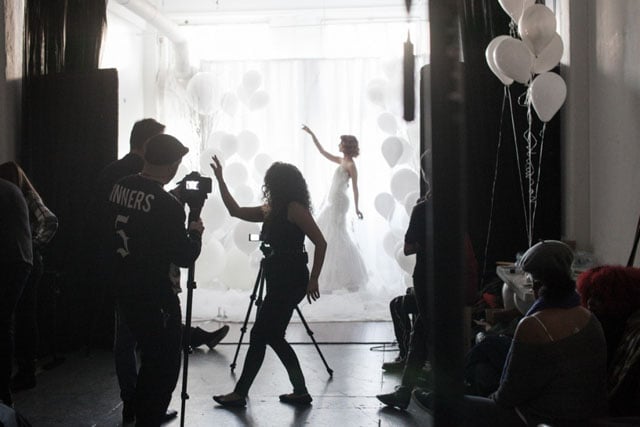 One of the images I presented the Flixel team was a surreal bridal image I had created the year before as part of one of my intensive workshops. I had the entire room filled with balloons, the entire scene backlit, glowing and ethereal. They wanted me to basically recreate this image, yet incorporate movement into the balloons. […]

The idea was to have the bride appear as if she were dancing or floating in a cloud of balloons. The balloons could subtly sway around her and take us further into this surreal dream world.

I collaborated with my good friend and set designer Ivie Joy Flowers to hang the see-through fabric in front of two large windows and then build a set of translucent and white balloons. To create movement in the scene, we used fans as well as balloons attached to long strings to create the desired twirl and sway of the balloons (that would later be animated in the cinemagraphs). All of the light in the scene was from the light streaming through the windows behind the model, giving us that wrapping and dream-like look. The second image that the Flixel team was drawn to was a photograph of a girl leaning against a wall of purple hanging flowers. The model was pale, and holding a fan. The coolness of the scene and wall of flowers was beautiful and surreal, and I knew I could take it one step further for an even more powerful image.

We decided that subtle movement in this scene would help create a really captivating cinemagraph, and that we would use fans to gently have flowers sway around the subject. I decided that I wanted the model to recline in a mix of stunning purple flowers, as if a princess surrounded by beauty. We selected dream-like silver hair, stunning princess bridal gown, and fairytale purple makeup to set the scene.

Ivie Joy Flowers constructed the stunning set of flowers for this cinemagraph. We discuss flowers carefully ensuring we could have long stems and delicate flowers that would sway in a subtle breeze. I wanted to have the model reclining in the flowers, and as she lay there it became evident that she looked very much like Sleeping Beauty. We had her slowly open and close her eyes, as if awakening from a long slumber by love’s true kiss. This fit our bridal/love theme perfectly. I stood high atop a ladder with the tripod zip-tied to the ladder to give me the perfect perspective. 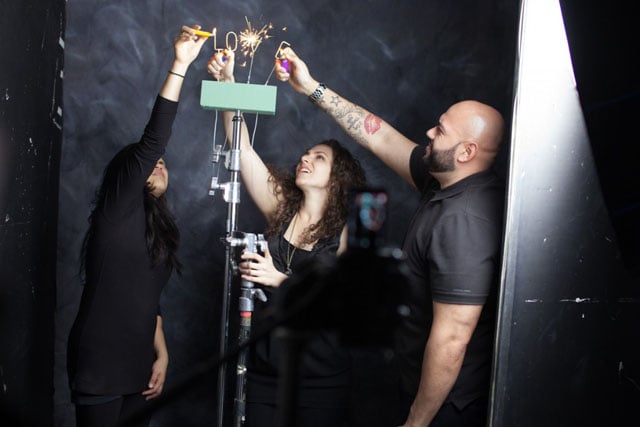 This last setup was a ‘bonus’ we decided to capture since we were all gathering for the shoot. We had seen another cinemagraph involving sparklers, and decided to do our own take on the concepts but with a bride. Before the shoot I went online and ordered sparklers that are usually used for wedding cake tops— they spelled out “LOVE”. For this living image we would shoot two frames. One still frame of the model, and another moving frame (video) with the sparklers (stuck in foam) that we would super impose to give us this sparkling image. We decided to combine two frames by matching the height of the sparklers behind the model so they would appear like they were on her head, but without any safety risks.

By looping the image (with a bounce loop) we would give the sparklers an endless twinkle. This created a playful and celebratory look to this bridal image!

Image credits: Photos and cinemagraphs by Lindsay Adler and used with permission