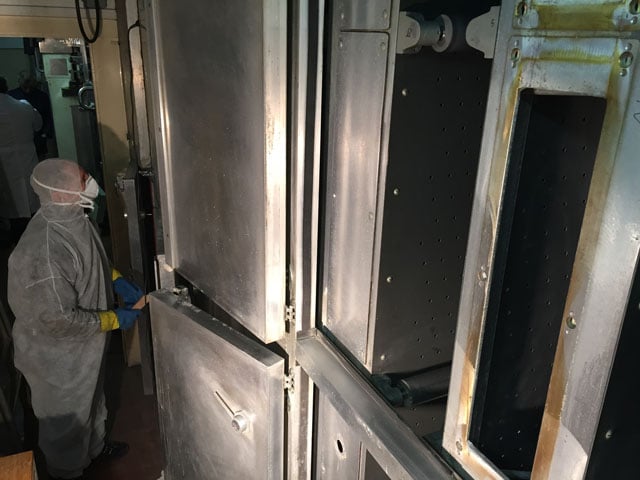 In 2013, we reported that the Italian film company Ferrania was planning to reboot its production of analog film. The next year, the company launched a Kickstarter campaign and ended up raising over $300,000 to bring film back.

Now that the company is working to restart operations, it has been posting regular progress updates on its website. The most recent “dispatch” shows how the company is cleaning a precision film coating machine to prepare for production.


The giant industrial machine, nicknamed “Little Boy”, “is the seed from which our future plans will grow,” the company writes. “And much like a seed, he was covered in dirt when we found him.” 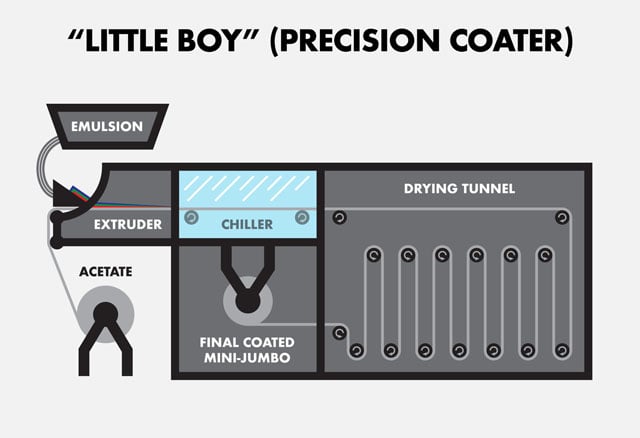 Here’s how the machine works: employees first load large spools of acetate (Cellulose Triacetate, or CTA) and emulsion (light sensitive chemicals and gelatin) into one end of the machine.

The extruder then applies layers of the emulsion onto the acetate in very precise amounts — even the slightest variation will ruin the film coating. The film then passes through a chiller, where the fluid layers are gelled so that they remain separate.

Next, the film passes through the drying tunnel, where it’s completely dried so that it can be spooled again. A system of rollers lengthens the distance the film travels. Finally, the film is re-spooled into a final coated mini jumbo that contains about 20x66000cm (7.87inchx0.41 miles) of usable film surface.

This coating process takes about 2 hours for each mini jumbo.

The problem is, Little Boy was decommissioned in 2006 and sat dormant for 6 years until 2012. Thus, metals oxidized, dust accumulated, and Little Boy became dirty and unusable. Ferrania is now working to restore it to tip-top shape so that it’s fit for film production again.

Even the tiniest bit of contamination in the machine could ruin entire batches of film:

The team is entering the machine with protective suits and masks and manually scrubbing every inch of it to restore it:

Here are some photographs of Little Boy in its dirty state and some of the cleaning that’s going on: 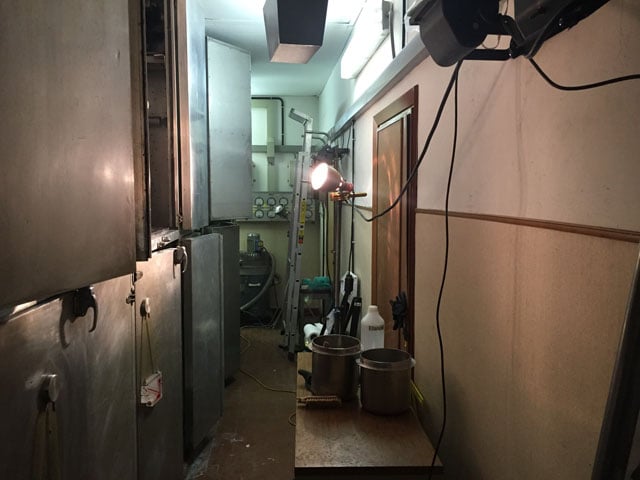 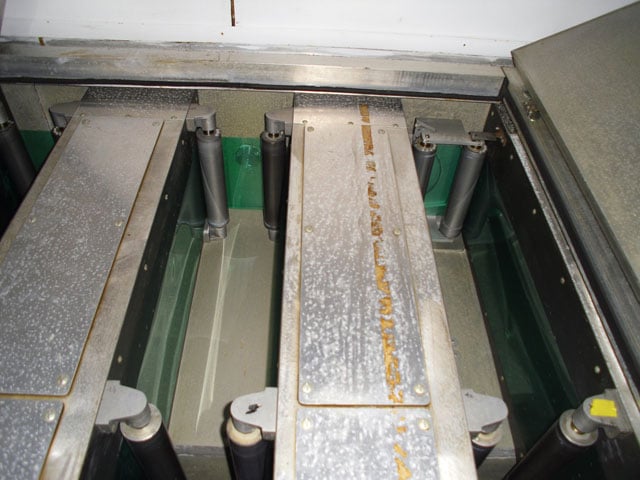 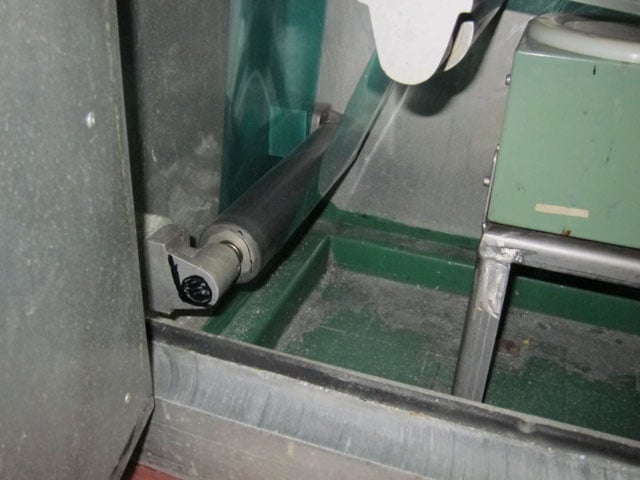 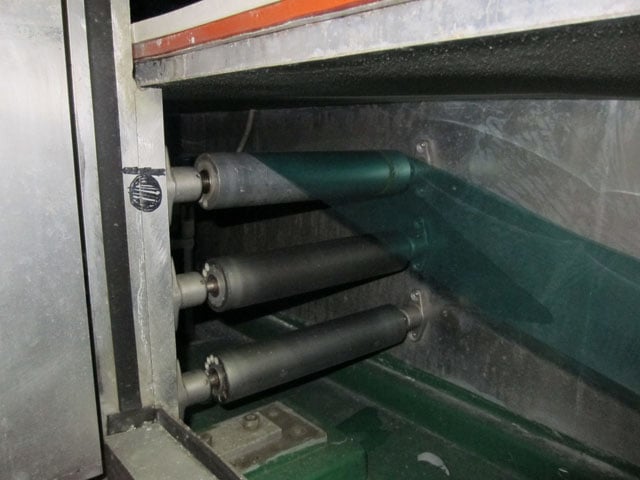 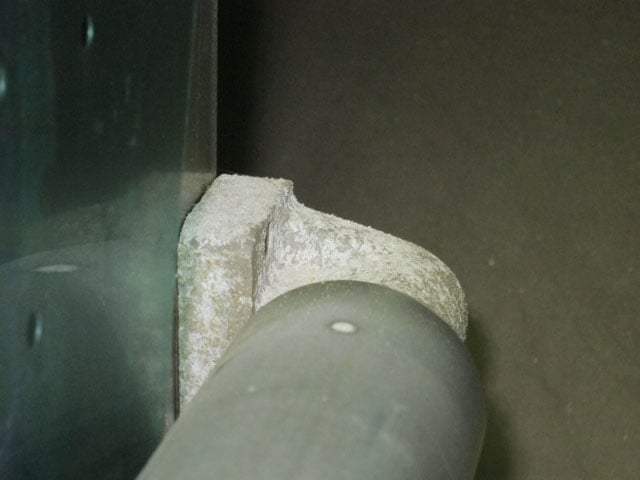 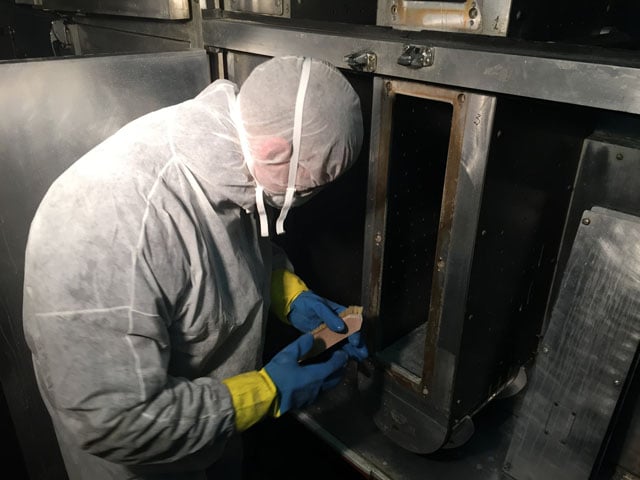 Ferrania is planning to ship out its initial batches of film rolls as rewards for the photographers who backed the fundraising project. Estimated delivery at this time is around April 2015. No word yet on when production batches of the film will hit store shelves, but it shouldn’t be too far now as long as things continue to go according to schedule.

(via Ferrania via THEME)

Image credits: Photographs and videos by Ferrania and used with permission